The bulls had a trend from the open bull trend, but there were tails and bad follow-through, which reduce the chances of a big early rally. Although the Emini is Always In Long, this rally so far is weak, and that increases the chances that the Emini will be sideways for an hour or two, and that today might be a trading range day. The bulls need a strong breakout. If the Emini drifts down to the low of the open, which would be around the moving average, the bulls will try to form a double bottom and a low of the day.

The bears will try to create a 2nd entry sell signal. If they succeed, the Emini could trade down, but the price action will more likely be sideways. This is a trading range open, and it reduces the chances of a trend day up or down. If there is a good buy signal bar near the bottom, or a good sell signal bar near the top, there could be a good stop entry for a swing trade. Otherwise, swing traders will need a strong breakout with follow-through in either direction, and there is no sign of that yet. Traders so far have been making money with buy and sell limit orders, which is a sign of a sideways market.

My thoughts before the open: Learn how to trade a big gap

The Emini 60 minute chart has been in a pullback for a few days. You can call it a wedge bull flag, even though yesterday’s 3rd push down held above the 2nd push down. The Emini is up about 17 points in the Globex market and will therefore probably have a big gap up. This increases the chances of a trend day, and the chance of a bull trend day is slightly greater than for a bear trend day.

Big gap days often are trend from the open days, and they can be in either direction. If there is a strong bear bar on the first bar or two, online daytraders will sell for a swing down. If the bar is too big, they might wait. If instead there is a strong bull bar or two on the open, they will buy, even though the gap up will make the Emini overbought on the open. They know that, even though the upside is usually limited, the Emini often goes far enough up for a swing trade before it pulls back.

The important test is Friday’s 2108.50 high because it was a lower high. The bears want a double top and the bulls need a strong breakout above. If the bulls succeed, they will then try to get above the all-time high.

The Emini might be positioning itself for a big move up or down on Friday’s unemployment report. The price action trading strategy for today is to look for swing trades. Although the day might end up as a small trading range day, the potential for a swing trading day is good at the moment. 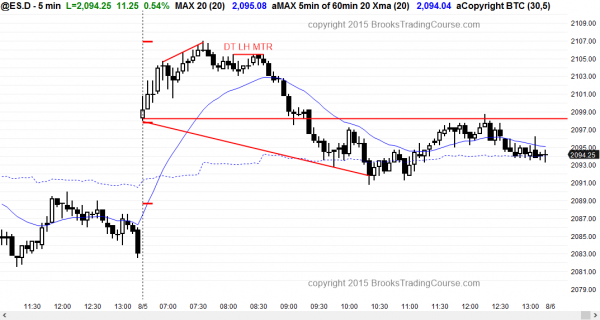 The Emini had a weak rally and then formed a tight trading range. There was a double top lower high major trend reversal within that range and it led to a bear trend. After a wedge bottom at the 60 minute moving average, the Emini rallied back to the open. The late selloff might be setting up a higher low major trend reversal for tomorrow.

The Emini had a weak rally on the open and then formed a double top lower high major trend reversal in a tight trading range. It traded down for about a measured move and a test of the 60 minute moving average. It then tested back to the open of the day, which was in the middle of the range. The late selloff might form a higher low major trend reversal tomorrow.

Tomorrow will probably also be neutral because the Emini usually tries to get neutral before an important report, like Friday’s unemployment report. There is always a chance of a trend day tomorrow, but since the Emini is in the middle of a week long trading range and spent a lot of time going sideways today, the odds are that tomorrow will also be mostly sideways.

All of the Forex markets might simply be increasing their volatility going into Friday’s unemployment report. Many are in breakout mode, and they might breakout before the report.

The EURUSD daily chart is forming a triangle with the May and July lows. The 5 minute chart rallied a little over the past couple of hours, but is pulling back. The location is good for the bulls for a swing up for several days. If the 5 minute pullback forms a higher low, the swing up could begin today.

The USDJPY is at the top of the July trading range and it had a 3rd push up overnight on the 240 minute chart. This is a triangle or a wedge. Although it had a bear breakout on the 5 minute chart over the past 2 hours, it has reversed back up to around the 50% level. If the bears can stop the reversal, the bear breakout could be followed by a channel down. The bulls are hoping that the reversal is just a pullback from yesterday’s rally and that it will be followed by a breakout above the triangle.

The 5 minute chart of the GBPUSD had a strong enough overnight, but it is simply testing the top of its tight trading range on the 240 minute chart. The bulls need a breakout. If they get it this week, they will try for a measured move up.

I think the most interesting candlestick pattern is on the USDCAD 240 minute and daily charts, and I have mentioned several times. It is in its 3rd pus up in a tight bull wedge, and there is a tight trading range from early 2015 below, which is a magnet. The odds are that there will be a swing down on the daily chart that will last at least a couple of weeks, and it will probably start within days. This could be a good opportunity for traders learning how to trade the markets. Once the swing down has begun, there will be many opportunities to swing trade shorts on the 5 minute chart. There was a bear breakout over the past hour and it is big enough for follow-through selling. Those who trade Forex markets for a living should pay attention today because this might provide the best online currency trading for several day.