The Emini began with a failed breakout above yesterday’s high and the top of yesterday’s bull channel, and had a trend from the open bear trend. The follow-through bars were weak, which increases the chances that the swing down will be followed by a trading range or even a swing up. At the moment, the Emini is Always In Short, but at the Globex low and at the bottom of yesterday’s late trading range.

Although the Emini is Always In Short, the lack of strong follow-through, the prominent tails, the stall within yesterday’s trading range, and the 4 day trading range on the daily chart all reduce the chances of a bear trend day. The odds are that the swing down will last 1 – 3 hours and then be followed by a trading range or a swing up. Although today could still become a bull trend day, that is unlikely. A weak bear trend day or a trading range day are more likely.

Yesterday was the 3rd consecutive day with a low below the low of the prior day. In a tight bull channel, like the Emini has been in for 6 weeks, pullbacks usually last 1 – 3 days before the bull trend tries to resume. Today was likely to trade above yesterday’s high. The Emini is up 7 points in the Globex market. However, because the daily chart has had 6 consecutive buy climaxes within its bull channel, and that is unusual, it is a buy climax. The Emini is also stalling just below the resistance of the all-time high.

A buy climax is usually followed buy about 10 bars and 2 legs sideways to down. The past 3 days were probably the 1st leg or part of the 1st leg of the pullback. This means that there will probably be sellers above yesterday’s high, and any bounce up to around last week’s high will more likely be sold that break to a new all-time high. The result will probably be a trading range for a couple of weeks.

Obviously, the momentum up has been strong and the seasonality is bullish, and the Emini could easily break strongly above the all-time high this week or next. It is more likely that it will not. Even if it does go above the high, the breakout will probably be small and brief because of the climactic nature of the 6 week rally.

Since the Emini is probably in a 2 week trading range on the daily chart, moves up and down will probably last only a few days and disappoint both the bulls and bears. The bars will also probably be mostly small and many will close near their open. Small bars with tails on the top and the bottom mean that most of the days will be trading range days.

This means that the 5 minute charts will have mostly swings up and down that last from 1 – 3 hours and then go sideways or have an opposite swing. There are often trend days within trading ranges, but most days will probably be trading range day over the next week.

Today is Veteran’s day and banks and the government is closed. This means less information and probably fewer traders, and it increases the chances that today will be a smaller day and a trading range day, even if it gaps above yesterday’s high. However, traders learning how to trade the markets should be ready for at least one swing trade up or down, even if the day is small and mostly sideways. Those who trade the markets for a living will hold their swing trades all day if the day becomes a strong trend day, even though they know that a trading range day is more likely.

The EURUSD had a series of sell climaxes last week, and the final one was big. This is usually followed by a sideways to up pause that can last several days. It broke below the May-July double bottom, but it is still 200 pips above the April low, which is the next support level.

The market is deciding whether the breakout below the double bottom will led to a measured move down, which would result in move down to around 1.0200 and possibly to psychologically important 1.0000, or to a reversal back up into the 6 month trading range. The channel down over the past month is tight, which means that the momentum and therefore the probability favors the bulls. It has also been in the form of a series of sell climaxes, which means that the bears might soon exhaust themselves. If so, the EURUSD might have to test up to support before the bears become aggressive again and create another leg down.

Support is around the 1.0825 bottom of the trading range, which is also around the 20 day exponential moving average. A pullback to the breakout point is likely, but it might not come until after a test down to the April low just above 1.050. The EURUSD has been sideways for 3 days as traders decide whether it will fall to support before pulling back or rally to resistance before resuming down. The sell climaxes have been so extreme that the probability of a sideways to up move to resistance is more likely.

Resistance on the 60 minute chart is at the top of the 4 day trading range, just below 1.0800. If the bulls get a breakout above that, the next resistance and magnet is 100 pips higher at the top of the November 5 trading range. Above that are the other lower highs at 1.1000 and 1.1100. It is too early to buy with those distant targets in mind, but the 60 minute chart is trying to form a higher low major trend reversal for at least a 2nd leg up after yesterday’s rally. If the bulls fail, they will probably buy below yesterday’s low and try again to create a 60 minute reversal that will probably last 100 – 300 pips over the next week or two.

The bears see the sell climaxes, but know that a series of sell climaxes can extend much further than what appears possible. They also know that any reversal up will probably be followed by a test down. They see the risk of selling as small and will scale in during any reversal up. Since a pullback is likely this week or next, bears will probably be able to sell at higher prices, and most bears should wait to sell. 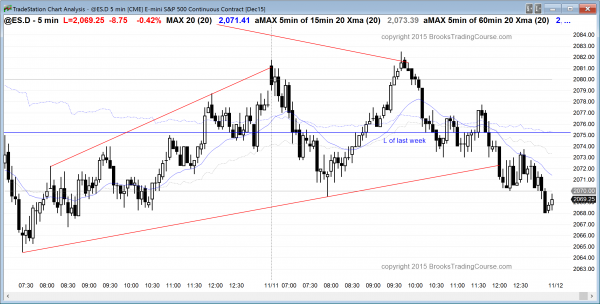 The Emini had big swings in a trading range day. There was a 2nd leg trap at the high of the day, and several buy and sell climaxes at channel tops and bottoms.

The Emini traded above yesterday’s high, as expected, and it formed a trading range day, which was likely. The swings were big. The Emini will probably remain in a trading range for another 5 days or so, but traders always need to be ready for a big trend day in either direction.