The Emini opened with a big gap down below the March low after a huge sell climax yesterday, and reversed up from a trend from the open bull trend. The bears are trying to reverse the market down and keep the gap below yesterday’s low open, but the selling yesterday was so extreme and the bears fell below a lot of important support. Bears will take profits and value bulls will buy.

At the moment, the Emini is Always In Long, but at trading range is more likely than a bull trend. The bears are currently reversing the Emini down from below yesterday’s low and they are trying to keep the gap open. However, the sell climax was so extreme that the odds are that the Emini will have at least two hours of sideways to up trading. With the early reversal up, that has probably begun. This is probably going to be in a trading range for at least a couple of hours.

The 1987 crash began with an early rally, and old timers like me know that the market knows that. It is trying to make traders wonder if this is a repeat of the Crash. While it might be, the chance is small. More likely, this selloff will be a bear leg in what will become an early trading range. The bulls will see major trend reversals in the range and the bears will see bear flags. Until there is a strong breakout, traders will be quick to take profits.

Pre-Open Market Analysis for August 21, 2015
S&P 500 Emini: Learn how to trade the markets after a sell climax

The Emini had the most interesting day of the year yesterday. Although it collapsed into the close, the selloff missed breaking below the March 2023 low by only 1.5 points. That means that as strong as the selloff was, it might simply have been a sell vacuum test of the bottom of the 5 month trading range.

Because the bar on the daily chart was so big, there is at least a 60 % chance that there will be follow-through selling over the next several weeks, and that the selling will fall for a measured move down. The monthly bulls are running out of time for a test of the monthly moving average. Since the test is likely within the next few months and yesterday’s selloff was so strong, this is also another reason why this selloff has a 60% chance of falling further. The monthly moving average is 10% below the all-time high, and that is the minimum target.

Today is the follow-through bar on the daily chart and it affects the probability of what will follow. If today closes below its open and has a bear body, it will confirm yesterday’s bear breakout and increase the chances of a measured move down. If today is a strong bull reversal bar, it would increase the chances that yesterday was simply a failed breakout of the bottom of the trading range.

Since the monthly chart has an 80% chance of at least a 10% correction this year, even if yesterday is a failed bear breakout, the odds still are that the correction has begun. This means that traders will look to sell any rally on the daily, even if it lasts 5 or 10 days. The odds still favor the bears over the next month or two.

The Globex market is down about 5 points at the moment and it had a higher low major trend reversal last night and a 20 point rally. As what usually happens, the rally evolved into a trading range. Day traders will watch for possible follow-through selling from yesterday’s sell climax for the first hour or two, but expect at least a 2 hour sideways to up move today, and possibly a bull trend day. If today is a bear trend day, the trend will almost certainly be weaker than yesterday. It would probably have a lot of two sided trading and be either a trending trading range day or a broad bear channel. Both would provide setups for bulls and bears.

The Euro was strong and the dollar was weak overnight. The 60 minute chart of the EURUSD has been in a tight bull channel for 2 days and has had a series of breakouts, which are climaxes. A series of climaxes has a 70% chance of evolving into a trading range, which means at least 2 legs and 10 bars sideways to down.

There is no sign of an end of the rally yet, but it will probably end today. The EURUSD 60 minute chart is clearly in a bull trend. The daily chart is trying to breakout of a 6 month triangle, but the rally over the past month is still within the trading range. Until there is a breakout above the top of the range, which is the May high of the year around 1.1500, the odds are that the rally is just a leg within a trading range.

The 5 and 15 minute charts had a selloff at the start of the European session last night that broke below their bull channels. The selloff was strong enough so that about 10 of the 15 minute bars were completely below the moving average (MAG, moving average gap bars). When that happens, those who trade markets for a living expect that the next rally (the current rally) to have at least a 50% chance of trying to form a sell signal once it gets back to the top of the bull channel.

The current 5 and 15 minute rally is testing the overnight high. Traders learning how to trade the markets should look for a swing trade down. About 40% of the time, there is a profitable swing trade. The other 60% of the time, traders get either a small profit or loss, which cancel each other out.

Traders who prefer high probability setups do not sell the sell candlestick pattern. Instead, they wait for a strong bear breakout and then sell. At that point, the probability of at least a measured move down is 60%. They pay for this increase probability with more risk (their stop is further away) and less profit (much of the move has already happened). Both the early and late approaches are mathematically valid.

The 15 minute chart of the EURCAD is in a broad bull channel. Bulls are buying dips to the trendline and bears are selling above the prior high and scaling in for scalps down to the prior high.

The 15 minute chart of the USDJPY is in a parabolic bear channel. This should have at least a couple of hours of sideways to up trading today. Bulls will buy dips, bears will sell rallies, and both will scalp. If there is a strong breakout, they will switch to swing trading. 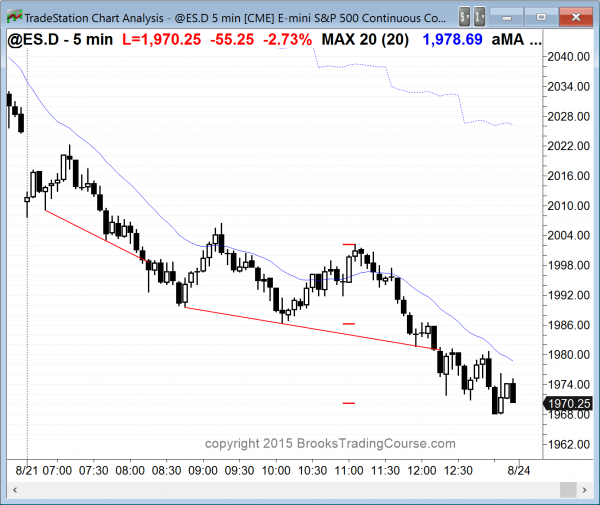 The Emini was in a broad bear channel and formed a huge follow-through bear day.

The daily chart is in a bear trend. On the daily chart, today formed a huge bear follow-through bar after yesterday’s big bear bar. The odds are 60% that the Emini will fall for at least a measured move down based on the height of these 2 bear bars. There might be another big bear day on Monday, but the selling is so climactic that many bulls who are still long will wait for a rally before selling. Many bears who want to sell see the stop as too far above. They, too, will wait to sell a rally. With bulls and bears eager to sell a rally, the first reversal up is likely to fail, and there will probably be at least one more leg down for a measured move down.

The selling is extreme and will probably end next week. August 30 through September 5 is often bullish, and it might provide a pullback for traders to sell. It is too early to buy because the odds are 60% that traders will be able to buy lower in the coming week or two. The minimum target is still the monthly moving average, which is around 1942 and only 29 points below today’s close.