The day began with a trend from the open bear trend, but the bars had big tails and were in the middle of yesterday’s trading range. Also, bulls were able to make money repeatedly by buying below bars and scalping. That combination made the initial selloff more likely a bear leg in a trading range than a bear leg in the early stages of a bear trend. The Emini is Always In Short, but unless it gets a big bear breakout with follow-through, this selloff will probably be limited to an hour or two and then be followed by a 2 – 3 hour swing up. This is true even though there has been only 1 bull body in the 1st 9 bars. The bulls are hoping for a double bottom with yesterday’s low.

If the bears do get their breakout, traders will begin to swing trade their short positions. This is less likely than a bear leg trading range.

The Emini is in a buy vacuum up to the August 17 high of 2091.25, which is the top of the bear trend. Whenever a market gets close to an important support or resistance target, it is like getting close to a Black Hole. Traders learning how to trade the markets should know that it usually cannot escape the gravitational pull and it then reaches the target, or gets to within a few ticks of the target. At that point, it is like it hits a switch that turns the gravity off. The market is then free to decide whether it will break strongly above, reverse down from a double top, or go sideways for 5 – 10 bars and then decide on trend resumption up or trend reversal down.

The Globex session top of the bear trend was slightly higher, at 2094.50. The Emini went 1 tick above last night and sold off ever since. This has no effect on whether the day session will get above its bear high. Since the Globex market is now 4 points below the day session target and that is more than just a few ticks, the odds are still at least 60% that the day session will test closer to its target within the next couple of weeks. It might pull back first because the daily chart is so overbought, but most traders believe it will get there. When institutions believe that market is going a little higher, why would they sell now? The lack of sellers usually leads to a buy vacuum, and that has been the force behind the rally the FOMC rally on Wednesday and much off the rally since last Thursday.

The Wednesday rally was the 2nd leg up after last Thursday’s rally, which was strong enough to have a 2nd leg up. This means that its minimum objective has been met, and it traders who trade the markets for a living are now wondering if the Emini will pullback before reaching the 2091.25 target.

Can the Emini break strongly above the target and then strongly above the all-time high? The odds are against it because the October rally has had 5 consecutive buy climaxes without more than a 2 day pullback. This is unsustainable price action and therefore climactic. A climax is usually followed by a TBTL (Ten Bar, Two Leg) pullback or even a reversal. However, climaxes can extend much further that what traders think is reasonable, and this one has not shown any evidence of ending yet. There is a 60% chance that the pullback will begin within the next week. However, that means that there is a 40% chance that it will instead break to a new all-time high 1st.

Today is the last day of the week and of the month and therefore weekly and monthly support and resistance are important especially at the end of the day. The most important target is 2091.25. The bulls want a close above it, and even above the 2117 all-time high. Both are within reach today. The bears want the opposite. They also want the week to close below its open of 2066.75 to create a bear reversal candlestick pattern on the weekly chart. Although that would be a sell setup for a lower high major trend reversal, the 5 week rally has been so strong that the best the weekly bears can hope to see is a pullback for a bar or two on the weekly chart. They will probably need at least a micro double top before traders will be willing to sell the trend reversal.

Day traders need to be open to anything today. Because of the Emini being so close to a very important price and because it the daily chart is so overbought, today has the potential to be a big trend day up or down. The overnight reversal was weak, and there has been a lot of trading range price action over the past week, despite the brief strong bull breakouts. Today could end up as another trading range day and wait for next week to test the target. Regardless of what the day does, day traders need to be ready for a potentially fast, big swing trade up or down in the final hour or two.

The EURUSD had two big sell climaxes down to the bottom of the 6 month trading range and it triggered a monthly low 2 sell signal (ABC bear flag) by trading below last month’s low. However, the bear flag was a tight trading range, and the breakout is more likely to be followed by sideways trading rather than another leg down. The rally that began yesterday was weak.

The 2 selloffs on the 60 minute chart of the past week were strong enough so that day traders are wondering if there will be a 3rd push down to a wedge bottom before there is a swing up. When there are reasonable arguments for the bulls and bears like this, the market usually enters a trading range. That is most likely for today.

The 60 minute chart of the EURJPY had a big bear breakout below a bear channel. That has a 75% chance of failing and reversing up. The reversal was strong enough to make traders wonder if the pullback from the brief rally will be a higher low major trend reversal and have at least one more leg up. The EURJPY has been sideways overnight and traders have not yet decided between a trend reversal up and trend resumption down. More trading range trading is likely today.

The 60 minute chart of the USDCAD has been in a triangle for several days. The rally of the past 2 weeks has been weaker than the 3 week selloff that preceded it, and it is still in the middle of that bear leg. The daily chart is in a broad bull trend and the bulls were hoping that this rally was a resumption of that trend, but the 2 week rally looks more like a bull leg in a trading range than a resumption of a bull trend. The USDCAD is likely to go sideways again today. 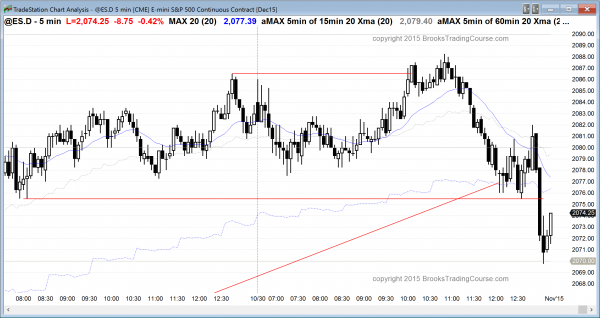 The Emini had an initial weak selloff, a rally that failed at yesterday’s high, and then a selloff to a new low of the day. The bulls bought it and the day closed in the middle, forming a trading range day.

The Globex session went above the August 18 high by tick and reversed down (the top of the bear trend on the Globex chart was one day later than on the day session chart). The day session failed to get to the day session high by 3 points and then sold off for the rest of the day. The consecutive buy climaxes on the daily chart make a TBTL Ten Bar Two Leg correction about 75% likely to begin within the next week or two whether or not the bulls get above the August 17 high. There is a 25% chance that the Emini will continue to rally in its tight bull channel to a new all-time high without a pullback first.