The Emini opened with a gap down to the moving average, but the opening reversal up lacked consecutive big bull bars closing on their highs. The rally was more likely a bull leg in a developing trading range. Although the Emini is Always In Long, there is a 75% chance of at least a couple of hours of sideways to down trading. A strong trend up or down is unlikely. Since a trading range is likely, there will probably be at least one bull swing and bear swing, each lasting 2 – 3 hours. The bear swing might have begun with the lower high a 10 minutes ago. The bears need to get below the low of the day and they need to form 2 – 3 strong bear bars before traders will be confident that a couple of hours sideways to down has begun.

Pre-Open Market Analysis
S&P 500 Emini: Learn how to trade a pullback after a buy climax

The Emini was a buy climax day yesterday, and therefore there is a 70% chance of at least a 2 hour sideways to down move today beginning within the 1st 2 hours. Those who trade the markets for a living know that there is a 50% chance of follow-through buying on the open for the 1st hour or two.

Last Thursday was a strong enough breakout to have at least one more leg up. Yesterday met the minimum goal. That increases the chances of a 5 – 10 day sideways to down correction, especially since the Emini was already overbought on the daily chart. The target for the bulls is a test above the top of the bear trend, which was the August 17 high of 2091.25.

The bulls could get there today or tomorrow, but because the buying has been climactic, the Emini might pull back first. The Emini is close enough to that resistance that there is only about a 30% chance that it will be able to break free of the gravitational pull and turn down without getting there. Once it gets there, if it gets there, bulls will probably take profits and the Emini will probably go sideways for a week or two. At that point, the bulls would the try to test the all-time high.

The Emini is down 9 points in the Globex session. The correction from yesterday’s buy climax has already begun. Bears will sell near yesterday’s high, and bulls will take profits there, so the odds favor an early trading range today.

Tomorrow is the last day of the week and of the month so weekly and the monthly charts are important tomorrow. The monthly bulls have almost totally erased the August bear breakout of the tight bull channel. September was a buy signal bar for a 20 gap bar buy signal (the Emini stayed above the moving average for 38 bars, not just 20). However, it was a doji bar. That is a weak buy signal bar and the odds were that there would be sellers above and that the Emini would go sideways for at least another month or two. Instead, the Emini might close on its high. If it does, it will have reversed the August selloff and it would have negated the September weak buy signal bar.

The weekly chart has been up strongly for 4 weeks. The bulls want the week to again close on its high. The rally has been strong enough so that bulls will buy the 1st reversal down. Traders learning how to trade the markets should know that this means that the best the bears probably can hope to see for several weeks is a trading range.

The 60 minute chart of the EURUSD had another big sell climax yesterday. It is getting close to the bottom of the 60 month trading range, which is around 1.0850 and about 100 pips lower. Because of the extreme selling this week, there might not be many traders left who are willing to sell at this low price. When there is a sell climax like yesterday coming after a tight trading range that formed after an earlier sell climax, the odds begin to favor a transition into a trading range. That tight trading range often becomes the final bear flag before a rally that lasts for at least a few days.

The EURUSD formed another bear flag last night. Traders are deciding whether it is sufficiently washed out for bears to refuse to continue to sell low, or if the market needs one more leg down before the bears take profits and wait to sell higher. There is room to the bottom of the 6 month trading range, but the selling has been so extreme that there might not be any bulls left to sell out of losing positions. There is about a 50-50 chance of a 3rd leg down or of a 3 or more days of sideways to up trading. Over the last hour, the bears have created a breakout below last night’s bear flag. However, the selloff has been weak. This increases the chances that it will stall in the overnight range and be mostly sideways today.

I mentioned yesterday that the USDCAD was overbought and likely to correct. It sold off 150 pips yesterday, and then bounced up strongly. Big up, big down, big up means big confusion and confusion means that a trading range is likely to begin to develop for a few days.

The EURJPY broke below the 6 month trading range yesterday. Most trading range breakouts fail, so there should be a bounce for at least a couple of days starting today or tomorrow. Yesterday’s sell climax was strong enough for at least one more brief new low, but it was so extreme that it might be an exhaustive sell climax and the end of the leg down on the daily chart. Traders will look for a test to the top of yesterday’s bear breakout at some point over the next few days. That is about 100 pips above the current price. 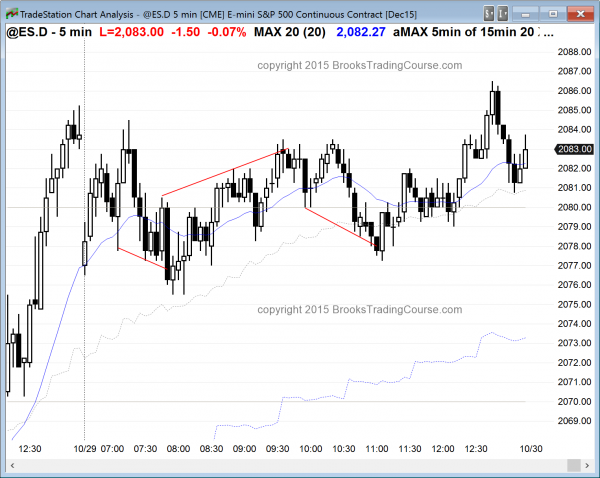 The Emini formed a triangle today after yesterday’s buy climax.

Today was a trading range day after yesterday’s buy climax. The Emini is just below the August 17 top of the bear trend at 2091.25, and that is the most important price on the chart until either the Emini tests it or sells off strongly without testing it. Tomorrow is that last day of the week and month, and the most important magnet is that same price. The bulls want a strong monthly close tomorrow above that high. The bears prefer that the Emini does not get the breakout. If the bulls get the breakout, the bears want tomorrow’s close to be below the August 17 high.

Other weekly magnets this week’s open and last week’s high.

The many consecutive buy climaxes on the daily chart in October will probably result in a 2 week trading range soon. However, overbought markets often become far more overbought tha
n what many traders think is likely and therefore it is too early to short on the daily chart. The pullback might not come until after a breakout to a new all-time high, although it will probably come before then. The Emini went sideways for 7 months at this price level. The odds favor more sideways again soon, despite the strong rally of the past month.

If the bulls get their breakout, and the odds are they will, even if there is a pullback for a couple of weeks first, they will next try for a new all-time high. The bears do not mind a test of the high as long as the test fails and creates a big double top.