The bulls got some follow-through buying on the open, but the Emini is extremely far above the moving average. Whenever the market does something extreme, it is in a climax. A climax can last a long time before the bulls take profits, but it is then usually followed by a sideways to down move that lasts at least a couple of hours. There are targets above, but this buying is so extreme that most day traders should buy pullbacks and not this rally because there is a 75% chance of an early high of the day that will last at least a couple of hours. The bears need a topping pattern or a strong bear reversal with follow-through selling, like 3 consecutive bear bars closing on their lows. Until then, it is better to wait.

The Emini had a strong bull breakout yesterday above the bottom of the 7 month trading range. It was strong enough so that a 2nd leg up is likely, especially if today has a bull body on the daily chart. If instead today is a bear bar closing on its low, the bears would have about a 50% chance of a reversal down without the bulls getting a 2nd leg up. The bears would see yesterday’s breakout as an exhaustion gap, and a wedge top with October 13 and 20.

The Globex market is up 15 points, which is a lot after a big day like yesterday. This increases the chances of exhaustion. However, there still might be an hour or two of follow-through buying on the open. Whether or not there is, there is a 75% chance of at least 2 hours of sideways to down trading today. It usually begins on the open or within the 1st two hours. The bulls will take profits when they have such big profits in so little time.

Also, their stops are now far below. Their risk is big. Traders learning how to trade the markets should know that the computers have to adjust their risk. For many, the simplest approach is to reduce the position size. When bulls take profits, they are selling, and the result is usually a pullback. Those who trade the market for a living know that the pullback can be sideways to down, and the profit taking usually lasts at least a couple of hours.

The next target for the bulls is the top of the August bear trend, which is 2091.25 at the August 17 high. There is now a 60% chance that the bulls will get very close to that, and a 50% chance that they will reach a new all-time high before there is another bear swing on the daily chart.

The daily chart of the EURUSD broke strongly to the downside yesterday. I said yesterday that there would be strong selling. There was follow-through selling over the past hour after the 60 minute chart formed a bear flag last night. When there is extreme selling like yesterday, then a pause like last night, then resumption of the bear trend, the odds are that the market is exhausted and that it will soon enter a trading range. While the selling of the past hour might last for another hour, there is a 75% chance that there will be at least a 2 hour sideways to up move today. It is not likely to be a reversal. Yesterday’s selling was so strong that the best the bulls can reasonably hope to see today or tomorrow is a trading range.

The dollar was extremely strong yesterday. The odds of a strong reversal down today are small. The daily chart of the USDJPY is near the top of its trading range and the USDCAD is around a 50% pullback from the 3 week swing down. Both charts are in a resistance area and are overbought. Both pulled back overnight, and both have resumed up over the past hour. There is often follow-through buying after a buy climax like yesterday, but it usually lasts only an hour or two, and then there is at least a couple of hours of sideways to down trading. That is what is likely today in both markets. Bulls will hope for a swing up, but then will begin to scalp. Bears will believe that the bulls will take profits and they will begin to sell rallies for scalps. The result is usually a trading range that will last at least a couple of hours. 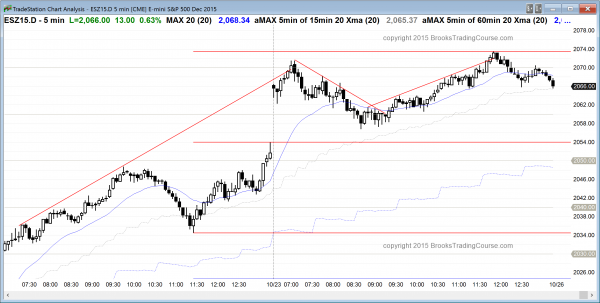 The Emini gapped up and then had a swing down and a swing up. It was a trading range day and it closed at the open, creating a doji candlestick pattern on the daily chart.

Yesterday was a strong bull breakout day, and today was the follow-through day. The one thing that the bulls needed was the absence of a bear close. Today closed 1 tick below the open, giving the minimum that the bears needed to create a bad follow-through day for the bulls. The bad follow-through today increases the chances of a pullback for a day or two, even though the market is near the end of the quarter, which tends to be bullish.

The Emini is overbought, but yesterday’s breakout was strong enough so that the odds are that the first reversal down will be bought. However, the rally on the daily chart has consecutive buy climaxes and that could lead to a 10 day sideways to down pullback at any time. The bulls are trying to get above the top of the August bear trend. If so, the bears will give up on their argument that the rally is a strong bull leg in a broad bear channel and instead is either a bull leg in a trading range or a bull trend.