The Emini closed the June 29 gap on the daily chart and formed a trend from the open bull trend. However, the follow-through was bad and it was a limit order open. Traders bought below bars, sold above, and scalped. When there is a breakout mode open, the probability for a stop entry is usually low, and the probability does not go up until there is a strong breakout with follow-through in either direction. However, the limit order open increases the chances that today will have a lot of trading range and tight trading range price action.

There is still a chance of a strong trend day up or down, but it is now significantly less. More likely, any trend will be weak and it will probably reverse and become a leg within a trading range day. Usually when there is a big gap and a weak move, the Emini has to test the moving average. At that point, it decides on the direction of the swing for the next couple of hours.

At the moment, the Emini is Always In Long, but the rally is weak and it will probably test the moving average soon. It might need one more new high for a small wedge top before it begins to test down. Once it gets to or near the moving average, the bulls will try for a double bottom reversal up with the 1st bar of the day. The bears would want a strong breakout below the low of the day and the moving average.

With the trading range price action so far, the odds are that today will be a trading range day and have a lot of limit order trading. However, if there is a strong breakout with follow-through in either direction, the day still could become a strong trend day. Currently, that is not likely.

My thoughts before the open: Learn how to trade the markets when there is a gap up

However, because the monthly chart is so overbought, even if the bulls get a measured move up from the tight trading range to above the all-time high, the breakout will probably fail. The trading range would then be the final bull flag on the weekly chart, and the Emini will then probably reverse down for at least 10%. The minimum target would be 10 weeks and two legs down and a test of the monthly moving average.

Today will probably have another big gap on the open, which slightly increases the chance for a trend day. If there is a trend day, there is a slightly greater chance of a bull trend day. The gap up would create an island bottom with the June 29 gap down, and the bulls would then want a measured move up, based on the height of the 2 week island bottom. The target would be around the all-time high.

Can the Emini gap up, close the gap down on the daily chart, and then reverse back down? Of course, because it would still be within the 7 month trading range, and bulls and bears constantly get disappointed by the lack of follow-through after strong legs up and down within trading ranges. Look back and you will see many gaps up and down within the trading range, all of which had only limited follow-through, and this one will probably be like all of the others.

The day trading tip for today is to be ready for a trend in either direction. Because the Emini is at an important resistance level, it could have a strong bull trend today above that level. If there is a bull trend day, it probably will not be a strong, clear bull breakout. More likely, it will be in a channel that will constantly form tops that do not look quite right, but are strong enough to make bulls hesitant to buy. If the Emini has a weak rally, but stays mostly above the moving average, swing traders should look to buy reversals up from the moving average and put a stop below the most recent higher low, and hold for a swing.

Likewise, be open to the possibility of a bear trend as well, and be ready to swing trade shorts if the price action is good for the bears. Day traders always have to be open to the exact opposite of what they think the market should do or is doing. 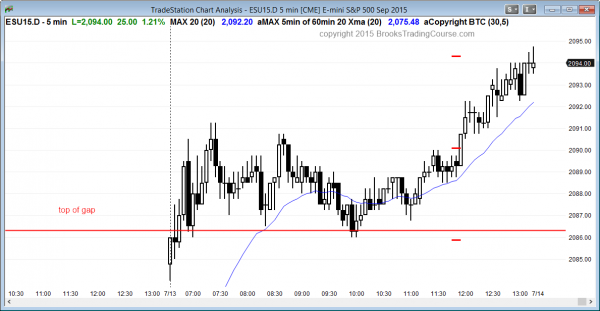 The Emini gapped up and was in a tight trading range for the first half of the day and in a small pullback bull trend for the remainder of the day. It closed above the June 29 gap down.

The Emini gapped up and formed a 2 week island bottom, but it is still in the middle of its 8 month trading range. Since today was a small trading range day, the odds are that tomorrow will also have a lot of trading range price action. By going back above the June 29 gap, the bulls now have a slight advantage. However, until there is a breakout, there is no breakout, and the probability of a bull breakout is only slightly greater than that of a bear breakout. Nothing has changed. Even if the bulls get their breakout, the upside is limited by how overbought the monthly chart is.

To no one’s surprise, there is a deal on Greece. The Euro was weak overnight and there might be continued swings down today, but the EURUSD is still in the apex of a triangle on the daily chart and therefore in breakout mode. Until there is a breakout, there is no breakout. Traders learning how to trade the markets should realize that the EURUSD would not be at the apex of a triangle candlestick pattern if one side had an advantage.

Yes, there was a strong selloff overnight, but the bulls see the two legs down overnight as the 2nd and 3rd pushes down in a wedge bull flag. Because there was a 3 hour tight trading range last night before this morning’s 3rd push down, the EURUSD might get pulled up into that bear flag and it might be the Final Bear Flag in the selloff from last night. There is no reversal back up and the tight trading range is only 30 pips above, but the downside in the current bear trend on the 5 minute chart at the moment is probably limited because of these factors.

The EURGBP sold off more sharply, but it is down only 70 pips from Friday. The shape is good for the bears, but the size of the move down is not very big. This limits the potential for significant further selling today.

The USDJPY continued its reversal up from last week’s failed breakout below a bull flag. I know this is complicated wording, but the bulls had a bull flag on the daily chart. It had a bear breakout. The bear breakout failed and reversed up. The bull flag was a spike and channel bear trend on the 240 minute chart. The reversal up is now near the top of that bear channel. As strong as the reversal up has been, it is now in a resistance area. The 5 minute chart is in a triangle after a strong rally last night.

If there is a bull breakout of this bull flag, it could fail because the 60 minute chart is overbought. This could create a Final Flag top or a higher high major trend reversal. Both candlestick patterns could provide good Forex trading for beginners. While the chance of a bear swing would only be 40% if there is a reversal, if there is a strong candlestick pattern for the sell signal, day traders could have limited risk of maybe 20 pips or so, and potential reward of 50 to 100 pips.

If the probability is only 40%, what is the other 60%? A trading range is the most likely thing that Forex day traders will see on the 5 minute chart today. The July 2 lower high is the target for the bulls and it is 40 pips above the trading range. If the USDJPY gets there, there are other tops in the next 60 pips above that, which form the top of the bull flag on the daily chart).

The USDCAD is testing the highs from January and March on the daily chart, and the 60 minute chart is in a 4 day tight trading range. This is a potential final bull flag. Until there is a breakout, Forex day traders will continue to scalp.