The daily Emini bears want a bear breakout below the bull microchannel of the last 11 days (every low has been above the prior day’s low for 11 days). This is climactic. The first bear breakout below a bull microchannel is usually bought, since the microchannel is a sign of strong buying pressure. However, it is also unsustainable and therefore climactic. The market then usually goes up again within a few days and enters a small trading range. It then decides between trend resumption up or trend reversal down.

The bulls want tomorrow’s close to be above the September high, turning October into an outside up month. However, since that is about 30 points above yesterday’s close, the bulls would probably need a strong bull trend day to be able to get there tomorrow.

Yesterday ended with a trading range and today has had trading range price action in the first hour. However, the bears have a reasonable chance of getting a breakout below yesterday’s low. The Emini is currently always in short and the bears need to break below the 60 minute moving average. The bulls bought there repeatedly yesterday.

The bears need consecutive strong bear bars to convert the price action to trending price action. Although today could be a strong trend day, since yesterday was a trading range day and since there probably will be buyers somewhere below yesterday’s low, if the Emini gets there, today will probably not be a strong bear trend day.

Since the September high so far above the current market and there have been good bear trend bars, it is unlikely that the Emini will be a strong bull trend day either. However, if the bears are unable to break below the 60 minute moving average after so many attempts, the Emini could trend up today.

At the moment, the Emini is in a trading range and the bulls need a reversal up. If they fail to get it, the Emini will then probably fall below yesterday’s low. 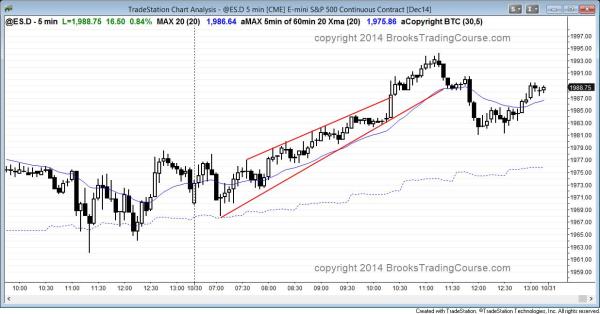 The Emini began with a big high 2 buy setup (an ABC pullback), which was a higher low major trend reversal. Despite the strong bull breakout above the bull channel, the odds were still 70% for a test of the bottom of the channel.

The Emini was in a bull channel for most of the day, but had a strong bear breakout at 11:20. Although there were two legs down, the legs were in a tight channel and might be simply one complex leg. If enough computers decide that this is true, then there will be a second leg down early tomorrow.

The daily chart has had 12 days without a pullback, and it is therefore overbought. However, this strong buying pressure and the odds are high that there will be buyers below today’s low for at least one more small push up.

Tomorrow is the last day of the week and of the month so weekly and monthly support and resistance will be magnets throughout the day and especially at the end of the day. The low of this week around 1944 is support, but it is 44 points away and unlikely to be a factor tomorrow. The bears had a gap bar two weeks ago and that increases the chances that the current rally will be the final leg and that there will soon be a major trend reversal. If the trend reversal triggers, the goal would be 10 bars and two legs sideways to down. The result is usually a big trading range lasting at least 10 bars. The bears prefer a lower high, but do not mind if there is a double top with the September high or a higher high major trend reversal, as long as there is a reversal. The bulls want a breakout above the September high and then a measured move up.

The monthly chart has many important prices within range tomorrow. The most important is the September high of 2012.75. The Emini broke strongly below September’s low, but has rallied 175 points in the past 3 weeks. Bulls would like to demonstrate more strength and one way to do that is to put tomorrow’s close above the September high. This would turn October into an outside up month and the close would be at an all-time high. However, the monthly chart is overbought, and an outside up month late in an overbought bull trend is more likely a buy climax than the start of a new leg up.

Other magnets on the monthly chart that are close enough to be factors tomorrow are the open of the month at 1962, the current high of the month, which was today’s high of 1994.25, the psychological round number of 2,000, and last month’s low of 1955.50.