Yesterday was a sell signal bar for a double top with the February 1 high, and for a wedge rally over the past 2 weeks. The odds were that today would trigger the short by going below yesterday’s low, and then traders would look for either a selloff or a reversal up. The rally last week was strong enough to make a 3rd push up likely, so the odds favor at least one more leg up above yesterday’s high. It is possible for the Emini to selloff for a few days or go sideways first, but the sell below yesterday’s low will probably be bought today or within a few days.

The first several bars today overlapped one anther and had prominent tails. Yesterday was a trading range day. The Emini had a buy climax last week. All of this makes trading range price action likely today. If there is a strong breakout with follow-through up or down, day traders will swing trade. Until then, they will be more inclined to buy low, sell high, and scalp. If a leg up or down, they will wait for a 2nd entry before taking the reversal.

The Emini is deciding between 2 things, and both had about the same probability coming into today. The bears see yesterday as a top, and expect the Emini to pull back to the 60 minute moving average and to close the gap below yesterday’s low. The bulls see last week’s rally as strong enough to have one more new high before a wedge top forms and there is then a pullback from last week’s buy climax.

At the moment, the Emini is Always In Short but it is in a tight trading range. Most traders are waiting for a breakout or a failed breakout, and expect a trading range day. This means that there will probably be at least one leg up and down, but they do not yet know which will come first.

The Emini finally broke above the February 1 lower high of 1940 yesterday, but it failed to break strongly above it. The cash index missed the target by about 0.5 points, but the momentum up over the past 2 weeks has been strong and this makes it likely that the cash index will also get the breakout this week. What happens after the breakout? We’ll see. A breakout that moves far above resistance and has big bull trend bars closing on their highs is likely to be a measuring gap and the start of a new bull trend. The Emini has not done this yet, but it might, even if it goes sideways to down for a few days. Look back at October and you will see that this is what happened then.

The day trading bears correctly believe that the odds are that this breakout attempt will fail, even if the Emini spends several days above the February high. Unless the bulls start to get several consecutive big bull trend bars or a series of smaller bull bars, the odds still favor a resumption of the bear trend on the daily chart, which has been creating lower highs since July. However, the bears will quickly change their minds if a convincing breakout develops. Even though they like the bear trend, they know that it is within a 2 year trading range and it is also a bull flag on the monthly charts. The bears realize they have not yet won, and they need a strong breakout below the February low before traders will be confident of a measured move down.

Last week’s rally was so strong that a 2nd leg up was likely after the 2 day pullback. Yesterday achieved the minimum goal. Bears see the reversal down at the close of yesterday as a micro double top with Thursday’s high, or they see Friday as a one day Final Flag. At the moment, the channel up was so tight that the odds still favor at least a little more up. The bears have done enough over the past 3 days to create a credible failed breakout above the February 1 high. However, the odds still favor more sideways to up. The bears will probably need a better top or a strong reversal down before traders will believe that this rally has ended.

Because the bears now have done enough and the bulls have failed to create a strong breakout, the price action is confused. When that is the case, day traders believe that rallies and selloffs will not go too far. They then tend to buy selloffs, sell rallies, and take quick profits. The result is a lot of trading range price action, which is likely for a few days. The monthly candlestick closes on Monday, and the Emini might go mostly sideways until then, and then decide whether to have another doji, like January, or a big bull trend bar, or a big bear body.

The Emini is down 3 points in the Globex session, which was in a trading range all night. The odds favor trading range price action today, but because the Emini is at major resistance, day traders will be ready for a strong reversal down or a strong breakout up.

The 240 minute chart of the EURUSD yesterday had a bear breakout below a bear channel. There is a 25% chance of a measured move down and a 75% chance of a failed bear breakout below the bear channel and then an evolution into a trading range. The breakout was strong enough to make a 2nd leg down likely. The selloff that occurred 4 hours ago might be the extent of that 2nd leg down. The daily chart is also testing the support at the top of the December/January trading range. The odds are that today will be a trading range day and that the daily chart will begin to go sideways for at least several days.

For the bulls to give up on the possibility of the December 3 bull trend reversal as being the start of a bull trend, they need to see a drop below a major higher low, like the January 5 low. Without that, they will assume that any selloff, even one as strong as what happened over the past 2 weeks, is just a bear leg in a broad bull channel.

The bears know that they created a strong selloff for 2 weeks, and that they did so after 2 legs up from the December low. They correctly see the 3 month rally as just a 2 legged bear on the weekly chart.

For the next several days, day traders will see the selloff as climactic. That will make the bears quick to take profits. They believe that there will not be much more down before a trading range forms. However, they will sell rallies, correctly betting against a bull trend for at least several days.

The bulls believe the same and they will be more willing to buy selloffs. However, they also believe that a bull trend is not likely until there is a better base. The result is that they will take quick profits. With both the bulls and bears buying low, selling high, and scalping, the result will probably be a trading range. If the range is tight, day traders will scalp for only 10 pips, and many will enter mostly on limit orders, selling above prior highs and buying below lows. Many will scale in to increase the probability of profitable scalps.

This is a dangerous way to trade for beginners. They might find it easier to make money by switching to the 60 or 240 minute charts for a few days and looking for 50 pips swings. 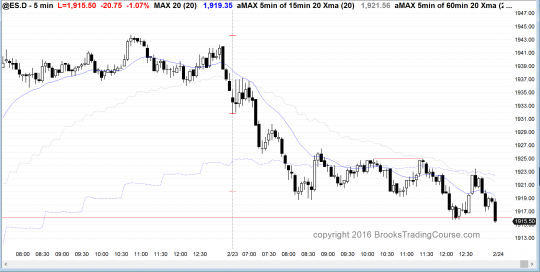 The selloff on the open was followed by a trading range and then trend resumption down to below Friday’s high, closing the gap on the daily chart.

The Emini is selling off from its test of the early February high. However, last week’s rally was so strong that it is more likely that a the selloff will be limited to a couple of days, rather than a reversal of the rally. The cash index will probably get above its February 1 high this week, which means that this selloff will probably be bought tomorrow or Thursday.

Monday is the last day of the month and traders are trying to influence the appearance of the monthly candlestick bar. With the Emini currently at the high of the month, it might simply stay in this area for a few days and then have a big move up or down on Friday or Monday.

In any case, as bearish as today was on the 5 minute chart, it so far is just a pullback from yesterday’s test of the top of the 2 month trading range. The bears need several more strong bear trend bars before traders believe that the Emini is ready to break below February’s low. More likely, the best the bears will get is a sideways market for a few days, hoping to create some selling pressure (bear bodies closing near their lows). After that, they would have a better chance of a reversal down.