The Emini reversed up strongly on the 2nd bar after testing the October 5 gap. The follow-through has been weak, but when there is an extreme sell climax on the 60 minute chart and a strong reversal up at support on the daily chart, the day is not likely to be a bear trend day. This means that today will either be a bull trend day or a trading range day. The Emini is currently Always In Long, but only 2 of the 1st 4 bars are big bull bars. This increases the chances of an early trading range. The bull bars were strong enough so that the reversal down will probably be bought.

The Emini is down 46 points in the Globex session. Yesterday triggered the sell signal on the daily chart that I discusses. It was a bear breakout below a small breakout of a small breakout, which is a type of failed wedge bull flag. Yesterday’s breakout was big enough to make lower prices likely. Today will probably open with a big gap down. These 2 days were caused by the trading range bulls finally giving up, and by strong bears selling to trap the bulls even more.

Because the 2 days of selling ha been so extreme, it will probably attract profit taking bears and bull scalpers. The result will probably be a trading range or a pullback that begins today or tomorrow. However, the odds are that the first reversal up will be sold.

The Globex session has been in a narrow range for about 6 hours. It is in breakout mode. The bulls want a reversal up and the bears want one more leg down. After such an extreme sell climax, if there is a bear breakout, the trading range will probably be the final bear flag before a reversal up for a day or two. Bulls and bears will probably be looking to buy a reversal up today. Although the bears will be willing to sell a strong trend down on the open, they will be quick to exit because the Emini is in a sell climax. The result can be a sharp reversal up at any time in the next day or two.

The EURUSD has been unfolding every day for the past month exactly as I have been saying every day that it was likely to do. This has given traders many good day trading opportunities. The daily chart had a failed breakout below a small head and shoulders top bear flag (it was a good size top on the 60 and 240 minute charts). As long as the selloff held above the December 3 bull trend reversal, there was a 60% chance of a 2nd leg up. It probably began on Monday.

The 3 day rally on the 60 minute chart has had several brief buy climaxes followed by pullbacks lasting several bars. This is more common in a trading range than in a bull trend, which means that this 1st attempt up might test back down to around Monday’s low before a leg 1 = leg 2 measured move attempt begins (leg 1 began with the December 3 bull trend reversal).

The overnight bull breakout on the 60 minute chart was big. Bulls want a measured move up from a bull breakout. The bears want the breakout to be an exhaustion gap and they want a test back down to Monday’s low. While there might be higher prices for a day or so, the rally from Monday’s low looks more like a bull leg in what will become a trading range than a new bull trend. This means that a pullback is likely today or tomorrow. An obvious target is the overnight higher low. The bulls hope that the pullback stays above the 1.0830 lower high and creates a measuring gap for a rally to the January 4 lower high around 1.0950. Because the rally was weak, there is a 50% chance that either target will be reached. Although the 5 and 15 minute charts are Always In Long, the weak rally means that bulls will be quick to take profits on any reversal. The result could be a deep pullback and the creating of a trading range on the 60 minute charts. Bulls will probably begins to switch to scalping today. Because a trading range is likely soon, the bears will be scalping as well. 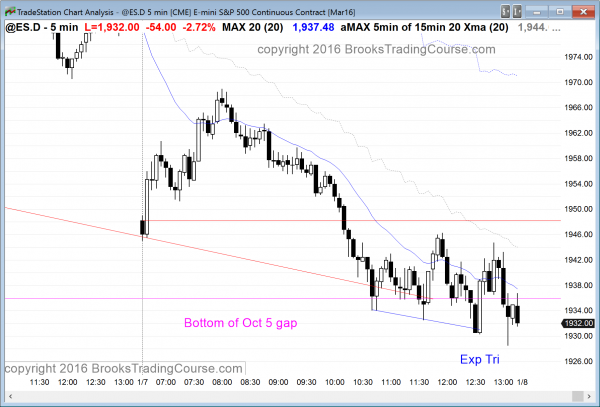 The Emini rallied for a couple of hours after a big gap down. It then sold off to a new low. It closed in the middle third and was a trading range day.

The Emini closed the October 5 gap on the daily chart and stayed around it for the rest of the day. Although the 60 minute chart is oversold and the 5 minute chart triggered and expanding triangle buy signal at the end of the day, the bears will look to sell the 1st 2 day rally for a test back down. They hope that the breakout below the 3 month trading range will result in a test of the August low. There is a 60% chance that they are right, but because of the sell climax on the daily chart, the Emini might bounce back above the bottom of the 3 month trading range first.

The bears are in control, but many took profits in the final hour and will wait to sell again higher. This can create a buy vacuum test up over the next few days. Less likely, the selloff will continue straight down to the August low.