At the moment, the Emini is holding above the moving average, but it has not yet had consecutive bull bars and it is still below the high of the 1st bar of the day. The bears have had consecutive bear bars twice, but have been unable to break below the moving average. Because of the consecutive bear bars, the bears have slightly higher probability, but the probability is still around 50% for the bulls and bears. Both have made money so far scalping with limit orders.

The days before and after Christmas are usually the smallest of the year and contain a lot of tight trading ranges. The ranges are often only 2 – 4 points tall and can last for hours. When they are 4 – 6 points tall, if a trader wants to day trade, the best option is usually entering with limit orders. Bulls buy bear closes and at prior lows in the bottom half. Bears sell bull closes and above prior highs in the top half. Both are betting that a conversion into a trend will fail. They use wide stops (for example, 3 – 4 points if the range is 3 – 4 points tall), scale in, and scalp for 1 – 2 points.

They sometimes will enter with a stop in a tight trading range. They will buy above a bull signal bar with a 1 – 3 tick body and no more than a 1 tick tail on its top if the reversal forms in the bottom third. They will also short below a small bear signal bar at the top. If the prior leg was too strong, they wait for a 2nd signal.

There will be swings up and down over the next two weeks. If a breakout is strong and the context is good, day traders will hold for 4 – 10 points. This is more likely in the 1st 2 hours of the day. If there is a strong trend at any time, they will swing trade and not question the trend.

November was a sell signal bar on the monthly chart. The December bar traded below the November low of 2006.75. There are less than 2 weeks left to the month. The bears want the December 31 close to be below the signal bar low as a sign of strength. The bulls always want the opposite. That might be the most important magnet over the next two weeks.

As strongly bearish Thursday and Friday were, they did not strongly break below the bottom of the 2 month trading range. Until there is a breakout, there is no breakout, and every strong move up or down is still more likely just a vacuum test of the borders of the trading range. I don’t care that everyone on TV is now suddenly bearish. I did not care that they became strongly bullish when the Emini had strong rallies over the past 2 months.

Price is truth. Until there is a strong breakout with follow-through, the Emini is still within a trading range. As you know, I think there is at least a 50% chance of the Emini testing the August low before it breaks to a new all-time high. That means that there is still almost a 50% chance of a breakout to a new all-time high first. If there is a strong bear breakout below the November low at some point over the next 2 weeks, the probability of a test of the August low will increase to 60% or more. That has not yet happened, but it might happen soon.

The selling over the past 2 days has been extreme. It is therefore climactic and unsustainable. The odds are that there will be at least 2 hours of sideways to up trading today. The bulls are hoping for a double bottom with the December 14 low and at least a 50% bounce to the 20 30 area. Even if the Emini trades below that low, the bulls will buy the breakout, betting on a month-long wedge bull flag from the December high. The 1st targets for the bulls are the lower highs.

The bears want a breakout below the December 14 low to be big and to have follow-through. If they get it, the will look for a measured move down of about 100 points below that low, and then a test of the August low.

The Emini is now up about 17 points in the Globex session. It is trying to get above the lower highs of last week to stop the selling and begin a trading range. If they are successful, they will then try to create a major trend reversal within the range. The bears will try to make the range become a bear flag. They want a bear breakout and at least one more leg down.

Again, the odds favor a lot of trading range price action over the next 2 weeks. If there is a big breakout below the November low, traders will look for a quick move down to the August low over the next month.

I said repeatedly after the December 3 bull trend reversal on the daily chart of the EURUSD that the odds favored a trading range that could last more than a month. The trading range is still unfolding.

All markets will probably spend a lot of time in trading ranges for the days before and after Christmas. The odds are that the reversals up and down will be limited to a few days and that the trading range will continue for at least a couple more weeks.

The EURUSD has had a bull breakout over the past hour. The stock market opens in 15 minutes, and traders will get new information. The breakout has only been about 40 pips, which is small. When breakouts are small, they are more likely to have limited follow-through. The rally is testing the December 15 low around 1.0900.

Because the rally of the past 2 days is small and in the middle of a trading range, and this is usually a quiet time of the year, the odds are that it is a bull leg within the range and that it will soon be followed by a trading range. Unless there is a big breakout with strong follow-through, day traders will mostly scalp over the next 2 weeks. If the ranges are less than 30 pips tall, they will mostly enter with limit orders and look for 10 – 20 pips profit. If there is a strong breakout, they will swing trade. 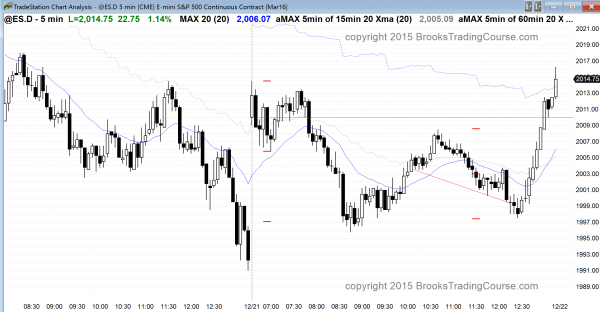 The Emini sold off below a wedge lower high, and then reversed up from a higher low major trend reversal, and then from a 2nd higher low. The day closed near the open and formed a doji day on the daily chart

Although the Emini had swings up and down, the day was an unremarkable trading range day. The bears see it as a pullback from the 2 day selloff, and therefore a one bar bear flag on the daily chart. The bulls see it as a failure of the bear breakout attempt, and therefore a buy signal bar on the daily chart. Because the Emini is near the bottom of the 2 month trading range, the probability is slightly higher for follow-through buying tomorrow, despite the 2 strong bear bars last week. The strong rally at the end of the day increases the chances for follow-through buying tomorrow.