The Emini sold off on the open from above Friday’s high. Friday had a small range so today could easily trade below Friday’s low and form an outside down day. The selloff had 6 bear bars and was deep enough to make a bull trend day unlikely today. Because there was a lot of overlap among the bars and the Emini is still within its 6 day trading range, the odds are that the selloff is a bear leg in a trading range. It is possible that today could be a big bear trend day, especially since there is a lower high major trend reversal sell setup on the daily chart. However, the 6 day tight trading range makes it likely that today will have a lot of trading range price action.

At the moment, the Emini is Always In Short and trying to go below yesterday’s low and form a strong bear trend day. A trading range is more likely, and a trading range day is also more likely. However, there has been enough selling so that the first reversal up will more likely be followed by a test down. The bulls want an opening reversal test of yesterday’s low, but there have been too many bear bars for that to be likely. Day traders will sell the first rally, but they probably will be more inclined to scalp, buying low, and selling high, like they have done for 6 days.

The bears need a strong breakout below yesterday’s low before day traders will think that a bear trend day is likely.

The Emini has stalled in a tight trading range for 6 days at the August top of the bear trend. It is currently up about 3 points in the Globex markets, and about 2 points above that resistance. If the bulls can break above it, the next target is the high of the month at 2110.25. Because there are so many targets just above and there is so little time left in the month, the odds of a bull trend day today are higher than usual.

Whenever traders believe that the odds of something are increased, traders learning how to trade the markets must realize that the odds of the opposite are also increased. This is because if there are more traders willing to buy as the market is going up, there will be more bulls swing trading than usual. If they are disappointed by the rally, there will be more bulls eager to sell out of their positions today, which can result in a bear trend, or a rally that reverses into a bear trend. Those who trade the markets for a living will be ready to swing trade up or down, depending on whether the price action has good momentum in either direction.

The Emini sold off in the Globex market and then reversed up strongly for the past 5 hours. It did so in a spike and channel bull trend, which is a buy climax candlestick pattern. It had a third push up about an hour ago, and wedge tops need at least 3 pushes up for traders to conclude that the pattern is a wedge. A strong bull breakout followed by a wedge bull channel (a spike and channel rally) usually has a bear breakout below the wedge and then is followed by a trading range. There is a bull breakout and acceleration up about 25% of the time. If there is a pullback from the buy climax, the targets for the bears are the 2 higher lows in the wedge. The result is usually a trading range lasting at least 10 bars, even if the bears are unable to reach the bottom of the wedge channel of 2087.25.

The Globex market has been going sideways for about an hour and has barely broken below the rising wedge, which means that there is very little enthusiasm for a selloff and the correction from the wedge buy climax might therefore be sideways instead of down. However, it is also enough of a pullback to relieve the overbought condition in the Globex market, and it could be followed by trend resumption up once the day session opens. This could result in a strong bull trend day from the open.

If so, the Emini might continue sideways for the first hour today before deciding whether to continue up to the monthly targets above, reverse down, or form a 6th doji day in the past 7 days, which would create a doji candlestick pattern on the monthly chart when the month closes at the end of the day.

The daily chart of the EURUSD has been in a tight bear channel for almost a month. The channel has had many doji bars and bars that largely overlapping prior bars. These are signs of a lack of conviction, and it makes the selloff more likely a bear leg in what will become a trading range than a bear trend with a lot lower to go before pulling back. The March and April lows are magnets that are pulling the Forex market down. The April low is about 60 pips below and the EURUSD might be close enough so that it can no longer resist the magnetic pull. This means that many bulls will expect the test. If they are confident that they will be able to buy lower, many will stop buying and wait to buy lower. The result can be a fast move down to the targets, and then an attempt at a double bottom. It is close enough so that traders would see a rally from here as a double bottom with the April low.

There is no bottom yet, but because of the look of the selloff and the context(just above support), the odds or a rally to resistance is likely soon. The nearest resistance is the 20 day EMA and the 2 lower highs in the month long bear wedge, which are about 200 pips above. The wedge is getting tight and there is a smaller wedge forming within the month long wedge. This increases the chances for a breakout within a week or two. If there is a bear breakout, it will probably fail around the March or April low, and be followed by a rally to resistance.

What should traders expect? The wedge channel on the daily and 60 minute charts is a bear trend. The odds are that it will continue. Since it also is a sell climax, the odds are that there will be a bear rally soon. Traders keep buying every new low for scalps, and selling ever bull reversal attempt, expecting another new low.

Today is the final day of the month. The monthly candlestick pattern is a big bear bar closing on its low and breaking below an 8 bar (month) bear flag. However, the bear flag followed a 12 bar bear micro channel (12 bars where every high was below the high of the prior month. Also, every bar had a bear body, and several were big. This selloff was the breakout below a 7 year triangle. The selloff on the month chart has been climactic. This increases the chances that the bear flag will be the final bear flag before a reversal up to resistance. Possible resistance is the moving average, the top of the bear flag, and the bottom of the 7 year triangle. Since this is a monthly chart, any pullback from the sell climax could last about 10 bars and have 2 legs sideways to up. Ten bars on the monthly chart is about a year. However, the selloff below the bear flag could easily last several bars (months) before the pullback begins. 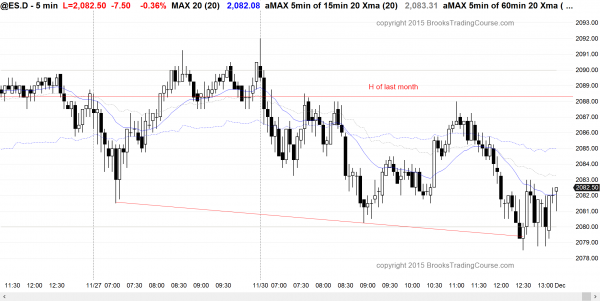 The Emini sold off on the open from above yesterday’s high. The rally up failed to get above the high of last month. The bear trend resumed for the final 2 hours and got close enough to the open of the month to create a doji bar on the monthly chart.

Today was the final day of the month and the month ended where it began. November was a doji bar on the monthly chart, which is weak follow-through after the strong October bull trend bar.

The Emini has been in a tight trading range for 7 days. Today’s selling was not enough to create a bear breakout. As long as it remains in the trading range, the odds are that rallies and selloffs will fail and that the tight trading range will continue. There is a lower high major trend reversal on the daily chart, but the sell signal bars have been weak. The bears need a strong bear breakout with strong follow-through selling if they are going to convince that they have taken control on the daily chart.