The Emini began with reversals, big bars, and a tight trading range. This was a limit order open and it increased the chances of a lot of trading range price action today, whether or not there is a trend up or down. The Emini reversed up from a wedge bottom at yesterday’s low and it had a bull signal bar.

It then had a big bear bar that broke below the low of the day and yesterday’s low, followed by a reversal up to a new high of the day. When the bars are 10 – 15 points tall and reversing repeatedly, most traders should wait for smaller bars or for a series of 3 or more trend bars in one direction.

At the moment, the Emini is probably Always in long because it reversed up to a new high of the day after breaking below yesterday’s low. This is a lower low major trend reversal. There is still a 40% chance of a new low of the day and a swing down. This is extreme trading range price action and it increases the chances of more trading range price action today. The big bars slightly increase the chances of a big trend once the market quiets down.

The 60 minute chart is in a spike and channel bear trend at the neck line of a double chart on the daily chart. This is giving day traders a chance to learn how to trade a sell climax at support.

The Emini last week broke below the support of the November 16 low of 2006.75 and the September high of 2004.00. The bear breakouts have not extended far below the support. This increases the chances that the selloff of the past 2 weeks is simply a test of support at the bottom of a 2 month trading range. If so, the odds are that there will be a bounce today or tomorrow. The Emini might want to get back to the middle of the trading range to be more neutral before Wednesday’s Fed announcement.

If the bears are able to continue the breakout below support, then the odds of a measured move down from the double top on the daily chart will increase. At the moment, there is a 50% chance of the move down and a 50% chance of a move back to the middle of the range.

The Globex daily chart did not break below its November neck line of the double top.That November 16 low is 1990.75, and the Globex session came to within 2 ticks of it one hour ago. The Globex chart still has a higher low after the December 2 lower high, and still might be in a 2 month triangle. That is a breakout mode candlestick pattern, which is neutral. Traders learning how to trade the markets should know that markets usually try to become neutral before a catalyst, like a major news event. However, those who trade the markets for a living are open to the possibility that there are so many bears who are anticipating a selloff on the report that they begin to sell before the report. This can lead to a bear breakout before the report, with the bears hoping that the report will lead to an acceleration down. That is hope, not reason. Whether or not the bear breakout continues right up to the report, there is still a 50% chance that the breakout would reverse on the report, and the reversal could be big and fast.

Finally, there is the possibility that the report is a dud. The Emini could simply have a small move up, or down, or both, and then continue its 2 month trading range. Traders trying to read the tea leaves before the report are fooling themselves. It is impossible to know how many bear dollars and how many bull dollars are waiting for the report. We will only know after the report comes out. Until then, the probability of a big breakout is the same for the bulls and bears.

Over the next three days, the probability favors the bulls because the Emini is oversold and at the bottom of a trading range. The odds are that it will bounce 20 – 50 points before the report. However, there is no bottom yet and it could continue to sell off to other support levels on the daily chart before it reverses up, if it is going to reverse up. For example, there is a gap just below 1950, but that might be too far to be reached in an oversold market that might want to get less oversold before the report.

On the upside, if there is a rally over the next 3 days, there is resistance above Friday’s high because Friday gapped down on the daily chart. The next resistance is the 20 day EMA, which is at 2054 and around a 50% retracement of the 2 week selloff.

Although neutrality on the daily chart is probably above Friday’s close because the daily chart is oversold, on the 5 minute chart, it could come by simply entering a trading range for a few days. Then the report might lead to a rally from the double bottom with the November low or a measured move down from that low.

The odds of a rally today or tomorrow are also increased by the candlestick pattern on the 60 minute chart. The 2 week selloff has been in a spike and channel bear trend. The channel down last week is parabolic and therefore climactic. A climax is usually followed by a TBTL (Ten Bar, Two Leg) sideways to up reversal as its minimum goal. Ten bars on the 60 minute chart is a day and a half.

The EURUSD had a strong reversal up from the April low and is now testing the bottom of the the 5 month trading range. The reversal up was exceptionally strong and it followed a tight wedge bear channel, which was a sell climax. The odds are that the first reversal back down from such a strong bull reversal will be bought and there will then be at least one more leg up. This means that the EURUSD will probably be in a trading range for at least a few more weeks.

The EURUSD is still in a bear trend on the daily chart, and whatever sideways to up move that comes over the next few weeks is still more likely a bear flag than the start of a bull trend. To create a bull trend, the bulls need to rally above lower highs, like the October 14 lower high that is around 1.1500, which is 500 pips above. It also then needs to begin to form higher lows. It has done neither yet.

Everyone knows that the Fed announcement on Wednesday is a catalyst. It has a 50% chance of leading to a big, fast move up or down. However, the odds are that a move down will be bought before it falls below the bottom of the December 3 huge bull reversals, and that there would then be a 2nd leg sideways to up. There have been 2 minor legs up from the April low and each had weak follow-through (there was not a series of big bull trend bars). This means that the rally will probably pull back soon. This increases the chances that a bull breakout on the report would be limited to a few days before it is sold. When the odds favor a market not going up too far or down too far, the market is probably in a trading range. That is the case for the EURUSD. Traders will probably look to sell a reversal down from a rally and buy a reversal up form a selloff after the report.

On the 60 minute chart, the EURUSD is trying to create a 3rd push up from the extremely strong December 3 bull trend reversal. If it does, that would probably form a wedge top and be followed by a reversal down. It has been in a triangle since the December 9 high, but that triangle is in a bull trend. The odds still favor at least one more new high before the EURUSD sells off to test the 1.0800 bottom of the wedge bull channel, and then enter a trading range.

Because the 60 minute chart is in a triangle and the odds favor a neutral market going into the Fed announcement on Wednesday, day traders are expecting a quiet market today and tomorrow. They will mostly scalp for 10 – 20 pips. If the range is very small, as it has been in the overnight session, they will probably enter with limit orders at the bottom and top. If the range is small, most day traders should wait until there is a breakout up or down before trading again. 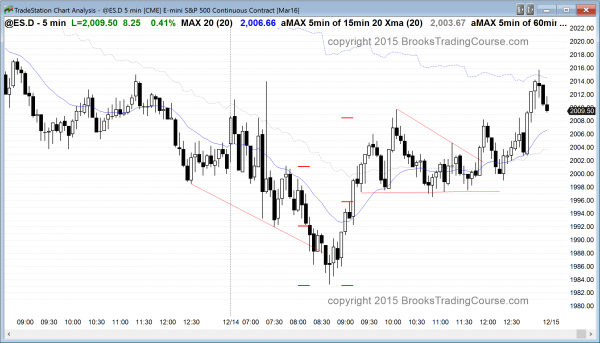 The Emini sold off with trading price action, and then reversed up and rallied for the rest of the day.

As I mentioned before the open, today would probably rally whether or not it sold off first. The Emini is reversing up from its test of support at the bottom of the 2 month trading range. The 60 minute chart had a sell climax, and traders will look for about 10 bars up, which is at least a day and a half. The odds are that it will be sideways to up tomorrow as well. Less likely, it will reverse back down below today’s low.