The day opened within yesterday’s trading range and entered breakout mode. The bulls want either a small buy signal bar near the bottom or a strong bull breakout, and the bears want either a small sell signal bar near the top or a strong bear breakout. Until then, scalpers will enter with limit orders. The trading range open increases the chances of a lot of trading range price action today. This means that the initial swing will probably have an opposite swing after 1 – 3 hours. While it is possible, today’s price action and yesterday’s reversal and buy climax make trading range price action likely today. If there is a trend, a bull trend is more likely than a bear trend after yesterday’s strong reversal up from support.

Although the Emini had a huge reversal up from above the January 27 higher low and bottom of the trading range, the day ended up closing near its open. It was a big doji bar, which is a one day trading range, and it formed in the middle of the trading range of the past month. It was more trading range price action than a strong bull reversal candlestick pattern. Because the rally was unusual, it was climactic and therefore unsustainable. That means that, although there is a 50% chance of some follow-through buying in the first 2 hours, there is also a 75% chance of at least 2 hours of sideways to down trading that starts in the 1st 2 hours. The Emini is down 15 points 40 minutes before the day session opens so that correction has already begun.

On the 60 minute chart, the bears see the rally as a right shoulder in a head and shoulders top bear flag. The bulls see it as a double bottom with last week’s low. Those who trade the market for a living see it as a bull leg within a trading range and have no expectation of follow-through buying. They will trade whatever happens today, knowing that within a trading range, the odds for the bulls are about the same for the bears, no matter what happened yesterday.

The foundation of the bull market is crumbling on the daily chart. December 14 should not have dipped below the September 17 high, January 4 should not have dipped below December 14, and the January low should not have dipped below the August 2015 low. Bull markets do not typically do this. This happens in trading ranges and in early bear trends. The daily chart is clearly in a trading range, and it is also in an early bear trend. The odds are still better than 50% that the 3 week rally is a bear flag, and just a pullback from the breakout below the August 2015 low. This means that the odds are better than 50% that the bear swing will have another leg down. If it falls below the January low, it probably will quickly fall to support on the monthly chart. The next level is the bull trend line around 1700, and there is other support around 1600 and 1500.

For over a year, I have written repeatedly about how unusual the monthly chart had been. It had not touched the monthly moving average for 38 months. This has happened with the cash index twice in over 50 years. It was followed by 22% and 36% corrections. This makes me suspect that the current selloff has more to go.

Because the selloff on the daily chart last month was so dramatic, the bear might wait for more than a month and for a test up to higher resistance before they aggressively sell again. Even though the odds favor lower prices over the next several months, they probably favor at least slightly higher prices over the next couple of weeks.

The rally in the EURUSD continue overnight, and it has now reached a leg 1 = leg 2 measured move target from the December 3 bull trend reversal. That is the 1st target for the bulls, and it might result in some profit taking. On the 60 minute chart, there was a tight trading range after yesterday’s buy climax, and that often becomes the final bull flag before a pullback. The rally over the past 6 hours has been in a tight bull channel and it accelerated until an hour ago.

This is a buy climax and it increases the chance of at least a couple of hours of sideways to down trading and the evolution into a trading range today. The swing up since yesterday morning has been big, which means that if a trading range is starting, the legs will be big enough for swing traders to try for 50 pips, and scalpers to try for 20 pips today. If the EURUSD enters a tight trading range, scalpers will take only 10 pips profit and they will look to enter with limit orders, selling above prior highs and buying below prior lows.

While it is possible that the rally could continue all day today, climactic price action is more likely to evolve into trading range price action once it gets near resistance. The current rally has reached a leg 1 = leg 2 measured move target on the daily chart, and it is also around the measured move based on the height of the 2 month trading range. With the channel as tight as it is, the stop for the bulls is far below. This means that the bulls have to reduce their position sizes to keep their risk at an acceptable level. When the bulls begin to take profits, the bull trend evolves into a trading range. That is likely to begin today, and probably last several days. 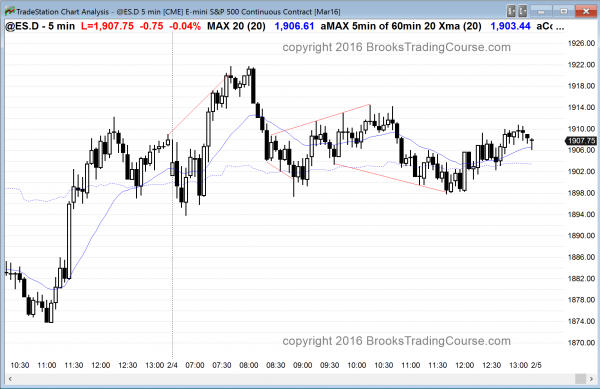 The Emini had follow-through buying in the 1st hour, and then sold off and formed a trading range day.

Today was another doji day with lots of limit order scalps. The selloff from the 50% pullback from the January selloff was so abrupt that it will probably be tested in the next few days. That occurred at Monday’s high of 1940. Less likely, Monday’s high was a double top with the January 13 high, and the bear flag on the daily chart is complete, and the Emini will work its way to below the January low. While it is still more likely than not that the Emini will fall below the January low, it is also more likely that it will test up one more time first.