Although the Emini sold off from the open, the follow-through bars were bad. Given the context, which favors 1 – 3 days of sideways to up, and the bad follow-through down, the odds are that this initial selloff will become a bear leg in a trading range. The selloff has been strong enough so that the 1st reversal up will probably be sold. The context is good enough so that there will probably be at least a 2 hour rally that begins by the end of the 1st 2 hours. This is probably going to be a trading range day with big swings. If instead it becomes a trend day, traders will be more willing to swing and hold, but a trading range with an early low is more likely.

The Emini is up 13 points with an hour to go before the NYSE opens. If you read my post over the weekend, you will see that the odds favor a bounce this week. Last week’s selloff closed a big gap on the daily chart and reached a measured moved target based on the 3 month trading ranged, and it did so in a sell climax. That combination is enough to make a bounce likely, and the rally might test the bottom of the 3 month trading range around 1980 over the next 2 weeks. Whatever rally comes will probably be sold. The break below the range was strong enough so that Friday’s low will probably be tested. There is a 60% chance that the rally will become a bear flag, and that it will be followed by a test of the September 29 higher low. The bulls will try to create a double bottom higher low major trend reversal there, and prevent a break below the August low. The bears want a test of the monthly trend line around 1700, and they have about a 40% chance of success.

The 60 minute chart has fallen in a tight wedge channel for about 50 bars, which is a long time. This is a sell climax. There is a 60% chance of a TBTL correction soon (Ten Bars, Two Legs). It might begin today. Targets are the moving average around 1945, and January 7 gap around 1970, and the top of the wedge channel around 2015.

Since the odds favor a swing up for several days, the odds of a bull trend day are higher than usual today. The 5 minute chart has a 2 day wedge bottom. The first target is the top of the wedge bear channel, around 1928, and the Emini is just about there in the Globex session. The ranges have been big.

This increases the chances of swing trades today. If today has big bars, day trading scalpers will hold for 2 – 4 points, instead of 1 – 2 points. Swing traders will also look for both a bottom to buy and a strong bull breakout.

Whenever the odds of one direction are high, there is a possibility of a pain trade. Instead of an oversold market getting a relief rally, the bear trend might continue down to the September low, and the bear swing might come after a strong early rally that traps the bulls. This is important to understand for traders learning how to trade. If the Emini begins to sell off strongly, those who trade the market for a living will sell, and not be paralyzed by their prior belief that a selloff was not likely. The job of a day trader is to trade what is on the chart, and not trade based on an expectation of what should be on the chart.

I wrote last week that the 3 day rally on the 240 and 60 minute EURUSD charts had price action that looked more like what traders see in a trading range than in a bull trend, and that the result would probably be a test down. There have been 2 strong pushes up over the past several days, and they formed a lower high in the bear channel that began after the December 3 bull trend reversal. The bears will continue to sell every strong rally until there is a strong breakout above a lower high, and especially above the month long trading range.

Because the 60 minute chart is near the top of its trading range, there will more likely be a test down over the next few days than a breakout above the top of the range. The 5 minute chart sold off in Asia and in Europe, but the selloff lacked momentum. It is therefore more likely going to result in trading range price action today. The probability is that there will be a test down to around the 1.0800 higher low before the EURUSD decides what to do next. As always, online day traders will always be prepared to swing trade if there is a strong breakout up or down, but the odds favor trading range price action today. 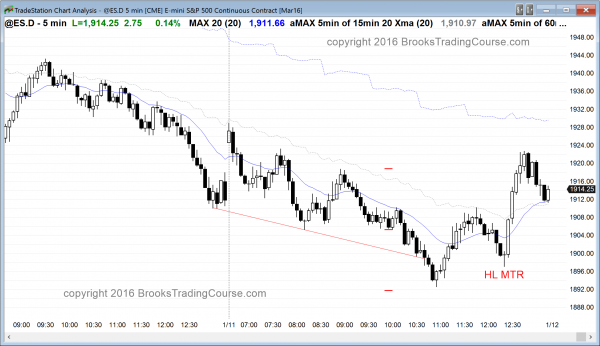 The Emini sold off in a broad bear channel for 4 hours and then reversed up at a measured move target below 1900. It then rallied from a higher low major trend reversal.

The sell climax on the 60 minute chart made a TBTL rally likely early this week. The late bull breakout is probably the 1st leg up. The 1st target is the 60 minute moving average, then the October 5 gap, and finally the December 14 bottom of the 3 month trading range. The bears hope that today’s reversal is just a 2nd leg trap in a trading range. Since it follows a 60 minute sell climax, the context is good for about ten 60 minute bars sideways to up. The odds are that selloffs will be bought tomorrow.