The Emini began with a trend from the open bull trend. Although it is possible for the Emini to reverse abruptly down, it is more likely that the bears will need a major trend reversal or an endless pullback and then a bear breakout. Both would take at least 10 bars to form. This means that the best that the bears probably can get over the next hour is a trading range. The bulls want a bull trend day. After the initial buy climax, the Emini might enter a trading range that could last for hours. If so, traders will then look for either trend resumption up or trend reversal down at the end of the day.

At the moment, the Emini is Always In Long, but far above the moving average. It probably will go sideways until it gets closer to the moving average. The bears might get a surprising strong reversal down since the 60 minute chart has a potential wedge top and final flag, but it is more likely that they will need a trading range before they can reverse the market down.

Yesterday was a bull flag on the 60 minute Emini chart near the all-time high, and today will give day traders a chance to learn how to trade the markets at resistance. The Globex session has begun to breakout and it up 6.50 points. Today is Friday so weekly support and resistance are important. Last week was a big bear bar on the weekly chart. This week traded slightly below last week’s low and the bulls are trying to trade above last week’s high of 2088.00. This would create an outside up candlestick pattern, which would totally reverse the bearishness of last week. The bulls would like additional proof that they are strong so that traders would feel more comfortable buying as the rally continues. One other goal for the bulls is for this week to close above last week’s high. They would also like this week to close above the November high of 2110.25, or even the all-time high of 2117.00, but the goals are unlikely to be reached today.

In trading, traders learning how to trade the markets should understand that what is good for you is bad for me. Those who trade the markets for a living know that the bears want the opposite of the bulls to prevent the bulls from showing signs of strength. The absence of strength for the bulls is the presence of strength for the bears. The bears want this rally to form a lower high, below the earlier November high, which was a lower high compared to the all-time high. Even though the Emini has been in a trading range for a year, lower highs are also the start of a broad bear channel. However, the dominant feature is the trading range, which has had many strong rallies and selloffs. Until there is a breakout either way, the odds for the breakout up or down remain at 50%. This is a neutral market where the bulls and bears have alternated control, but neither has been strong enough to sustain their control to the point of a breakout. Since the Emini is now near the top of the range, the odds of a reversal down toward the middle of the range are higher than the odds of a bull breakout. Until there is a breakout, there is no breakout, no matter how strong any trend within the range is.

Today’s bull breakout of the 60 minute bull flag will create the 3rd push up from the November low, and therefore it is a wedge rally. Wedge rallies, especially at resistance (here, the November high) are usually followed by a couple of legs of sideways to down trading. Traders will look for a pullback somewhere around the November high, and for the November 60 minute trading range to continue. Since it is following a climactic October rally and the 1st leg down in November was strong, the trading range might continue for a couple week more and create both a double top and double bottom. This would be a breakout mode setup going into the end of the year. Breakout mode patterns have about a 50% chance of a breakout up or down, followed by a measured move based on the height of the pattern, which is currently about 100 points tall.

The current rally is stalling at the top of the 3 day bear breakout on the daily chart. That was the target for the bulls, and therefore many bulls are taking profits. If they do not see much of a reversal down, they will buy again and then try to test the next resistance, which is the November high.

Although the Emini is up in the Globex session, the trading lacked momentum. It looks like a continuation of yesterday’s day session trading range. It might gap above yesterday’s low. If so, the bulls will try for a trend from the open bull trend. The bears will try to reverse the Emini back down, creating a failed breakout, and then either a continuation of the trading range, or a reversal back below yesterday’s low. Yesterday had a small range, and that increases the chances that the bears could create an outside down day on the daily chart, even if there is first an outside up day on the weekly chart.

Since the Emini was in a trading range yesterday, it is in breakout mode. The odds are for a continued trading range, and day traders will be inclined to buy low, sell high, and scalp until there is a strong breakout with follow-through in either direction. With the Emini are important resistance, a breakout is likely at some point today. If it is very strong and has follow-through, day traders will swing trade all day. Since the Emini is at the top of a year long trading range and the momentum has stalled over the past few weeks, a strong bull trend, like a small pullback bull trend is less likely than a weaker bull trend, like a broad bull trend, a trending trading range day, or a bull channel that lasts for a few hours and then reverses, converting the day into a big trading range day.

The 240 minute chart of the EURUSD has been in a wedge bear channel for a month. It broke above the channel 2 days ago and has 3 small pushes up. This is a wedge bear flag and the bears are hoping for a new November low. Because the month-long selloff on the daily chart has had many big bear trend bars, it is climactic. A sell climax can continue far longer than traders might believe. There are magnets below at the April and March lows, which the bears are trying to reach. Because of the 240 minute wedge bottom and the consecutive sell climaxes on the daily chart, the odds for at test up to the November 12 lower high of 1.0820 are about the same as the odds for a test of the April low over the next couple of weeks.

The bears had a breakout below the 240 minute bear flag overnight, but the breakout lacked strong follow-through selling. There is about a 50% chance chance that it will fail and be followed by a bull breakout above the bear flag and then a measured move up. Since the bear flag is about 150 pips tall, bulls will look for a breakout above yesterday’s high to be followed by about a 150 pip rally. The bulls are trying to prevent a resumption of the bear trend on the 60 and 240 minute charts. They want a reversal up from around the current level or around the November 18 low. This would be a major trend reversal, and it would have about a 40% chance of a swing up to the November 12 high. Most major trend reversals result in trading ranges and not actual reversals, but bulls are looking for a buy candlestick pattern or a strong bull breakout. If they get either, they will buy for a swing trade up. The bears will continue to sell rallies, expecting a test of the April and March lows.

The EURUSD has been in a trading range for several weeks, and the odds are that it will continue today. Because of the sell climax and important support, a strong breakout up or down can happen at any time. Until then, traders will continue to scalp, expecting all breakout attempts up and down to fail and reverse. 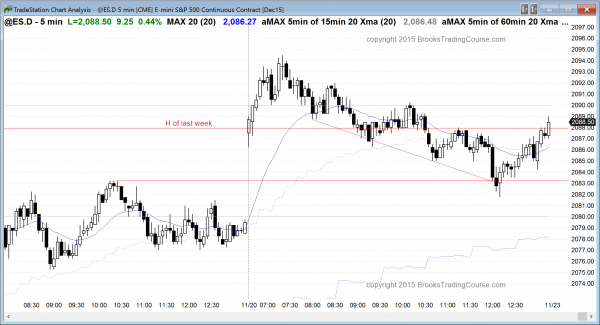 The Emini rallied on the open. It then had a smaller higher high double top and sold off in a tight bear channel all day.

Today’s target was 1 tick above last week’s high, which was reached during the 1st bar. Although the 60 minute chart has had 3 pushes up in its bull channel, the channel is tight and sideways is more likely than a strong bear trend on Monday. There is room to the November high and 2,100 magnets above. However, the Emini will probably continue its 5 week trading range for at least another week or two.