The Emini broke below yesterday’s bull channel and found support at the beginning of the channel. It formed an early tight trading range, which increases the chances that today’s price action will resemble that of the past 2 days. If so, day traders will mostly scalp, and many will enter with limit orders.

While it is still possible for the day to become a strong trend day, this early price action makes a trading range day more likely. Until there is a strong breakout up or down, day traders will continue to scalp. Because the 2 day rally was climactic, another bull trend day is unlikely, so the odds favor either a weak bear trend or a trading range. The bears want a test of the 60 minute moving average, but if they get it, it will probably come from a weak bear channel, and most bears will repeatedly scalp instead of swinging.

Pre-Open Market Analysis
S&P 500 Emini: Learn how to trade when the Emini is overbought

The Emini has rallied for 6 days in its 2 month trading range, and it is now near the top. It is overbought on the daily chart. It broke above the December 17 lower high. Because it is in a trading range, the odds are that the breakout will fail and be followed by a reversal down for at least a couple of days. Remember, during the strong sell off on December 18, I said that it would probably fail to lead to a bear trend. I have said during each strong leg up and down that failed breakouts and reversals were more likely than a breakout into a trend. The same is true here. While a breakout will come, 80% of breakout attempts fail.

Right now, the important force is the end of the year. The monthly and yearly charts close tomorrow. Bulls and bears are trying to create signs of strength. The bulls want the month and year to close on their highs. It is very unlikely that the bears will get their goal of a close on the low of the bars. Instead, they now only want the bars to be less bullish. They will try to create a pullback between now and tomorrow’s close to put a tail on the top of the monthly and yearly candles so that traders will see both as less bullish.

The Emini is down 5 points in the Globex market. A bull channel is a bear flag. Yesterday was in a bull channel so there is a 75% chance of a bear breakout today. If the breakout is strong, it could lead to a swing down. If it is weak, then a trading range for a couple of hours is more likely.

The overnight trading has been in a tight trading range. The bulls are trying to create a double bottom on the 60 minute chart around 1.0900, and the bears want a test down to the 1.0800 bottom of the month long trading range. Most of the day trading on the 5 minute chart for the past couple of weeks has been scalping for 10 – 20 pips, and often the best entry was a limit order, betting on a failed breakout. Most traders cannot trade this way and need to wait either for a clear reversal or a strong breakout. Alternatively, they can trade the 60 or 240 minute charts for bigger scalps. 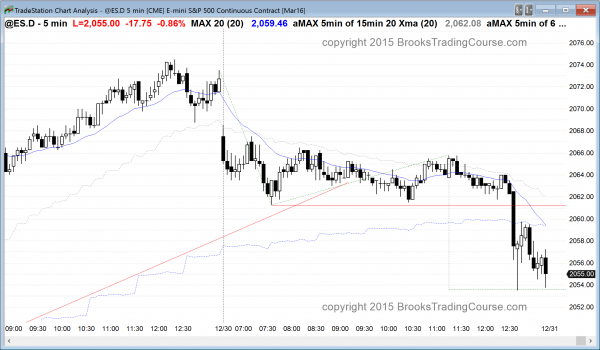 The Emini gapped down and entered a trading range. It had a trend resumption down in the final hour.

As I said yesterday, today was likely to have a pullback after 6 days up in a trading range. Tomorrow is the last day of the month and of the year. The most important price is the close of last year at 2020.25, but that is probably beyond reach for tomorrow. Tomorrow will probably spend a lot of time in a tight trading range.