Today opened with a big gap down and the bulls bought it aggressively, creating a trend from the open bull trend and the 4th big reversal since yesterday’s gap down. Even though the swings up and down have been very big, this is trading range price action. There will probably be a test down after the test of yesterday’s close, and then a trading range that might last for hours. Then, later in the day, the Emini will choose between trend reversal down and trend resumption up. On the 60 minute chart, this rally might be the double bottom that the bulls were hoping to create for a test back up into last week’s trading range.

The Emini is clearly Always In Long, but a trading range is likely, and the legs might be big. While it is possible that this is just a big leg up to a lower high in a triangle, the bears will probably need at least a double top before there is a clear reversal down. The odds are 80% that we’ve seen the low of the day, but if a trading range forms, especially if it is a 2 day triangle, the down legs can be big.

Pre-Open Market Analysis
S&P 500 Emini: Learn how to trade when the price action is confusing

The Emini finished yesterday with a strong reversal up from its breakout below the 2 week trading range. Bulls see yesterday as a buy signal bar for a higher low major trend reversal, and they expect a 2nd leg up from the January low. The bears see it as a continuation down from a double top bear flag on the daily chart and expect a break below the January low and then a test of monthly support. Both sides need follow-through. Without it, the trading range is likely to continue.

On the 60 minute chart, the selloff from last week’s right shoulder of a head a shoulders top was in a tight enough channel that the bulls might need a double bottom before they can get a bounce. The Globex market is down 22 points with an hour to go before the NYSE opens. If the bulls can get another reversal up today or tomorrow, that could create a double bottom that could result in at least a measured move up. There is a 60% chance that the Emini will fall below the January low within the next few weeks, whether or not there is a bounce. Yesterday was strong enough to make a bounce likely, but today’s big gap down will erase much of what the bulls did and make the Emini neutral again for the next few days.

I am finally seeing technicians on TV pointing to the support levels that I have been talking about for the past year. They are also beginning to talk about a much bigger correction, like a test down to the breakout point on the monthly chart, which is something that I have repeatedly mentioned for more than a year as a real possibility. It is too early to know if the Emini will reach those levels, but now that traders are considering them, it increases the chances that the Emini could have several big moves down over the next several months as it gets vacuumed down quickly to each lower support level. The bears need a break below the January low. Until they get it, the chance of the Emini testing the monthly breakout point around 1500 is only 30%.

Yesterday ended with a buy climax. The bulls had a chance of a gap up today, and then another test of the 1940 50% pullback level. Instead, today will gap down. When there is a buy climax at the end of the day, there is a 50% chance of follow-through buying in the 1st 1 – 2 hours on the next day, and a 75% chance of at least a 2 hour sideways to down move that begins within the 1st 2 hours. Yesterday ended with a big move up and today will begin with a big move down. Today could be a reversal and start of a bear trend, but more likely will be the start of a trading range.

Yesterday gapped down, which was a big move down. It reversed up big, and today will gap down big. Repeated big reversals increase the chances of a trading range on the 60 minute chart, which means it might go sideways for another day or two. The legs are big enough for swing trades up and down, so online day traders should look for candlestick patterns to buy near the bottom of the range and sell near the top.

There is a potential pain trade on the daily chart. If today sells off strongly, it could be the start of the breakout below the January low, and it could move down much faster and relentlessly than what traders think is reasonable.

The 2nd leg up on the daily chart of the EURUSD is continuing. The next target is the October 14 lower high just below 1.1500, and then the August 24 lower high around 1.1700. The bears need lower highs to be able to argue that the rally is a bull leg in a big bear channel. If the bulls can get above a major lower high, traders will start to believe that the bear trend has evolved into a trading range, or possibly a bull trend. There is no breakout until there is a breakout. This means that the odds favor a reversal down from resistance more than a breakout above resistance. After a pullback, the bulls might then get a breakout, but the odds even then are still that they will fail and that the trading range will continue. There obviously will eventually be a successful breakout up or down, but the odds are against any one particular leg being the start of that breakout. Markets have inertia, which means that there is a strong tendency to continue doing what they have been doing. The EURUSD has been having big swings up and down for a year, and that is the most likely price action going forward until there is a strong, clear breakout.

I wrote last week and yesterday that the bull breakout on the 60 minute chart was strong enough to have at least one more leg up, and that the trading range that began on Wednesday was more likely the start of a bull flag instead of a reversal of the bull breakout. The EURUSD 60 minute chart has rallied strongly for the past 6 hours. The rally of the past hour was especially strong, and therefore a buy climax. This means that the odds favor a pullback and a trading range over the next couple of hours. However, there is no sign of a top yet, and the momentum favors the bulls. There is also room to the top of the October 22 strong bear breakout. Its high around 1.1350 is an obvious location for weak bears to put their stops, which means that it is a magnet. The EURUSD will probably get there within the next few days. Weak bears will buy back their shorts, bulls will take profits, and strong bears will sell, so the EURUSD will probably stall and pullback once it reaches that target. 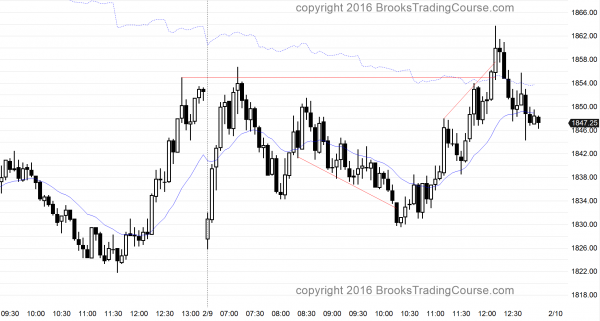 I left a few minutes early today. The Emini had big swings up and down, but got back above the 60 minute moving average and above yesterday’s high at the end of the day, but closed just below.

Yesterday was a buy signal bar on the daily chart for a higher low major trend reversal. The buy triggered early today, but the Emini had a deep pullback. It got back above yesterday’s high at the end of the day, but pulled back in the final hour. If tomorrow gaps up, there would be a 2 day island bottom, and the bulls would look for a measured move up to around 1880 – 1900, based on the height of the 2 day trading range.

If instead tomorrow reverses down strongly and it does not close the gap below Friday’s low, the Emini would then try for a break below the January low. As I wrote over the weekend, a test up is more likely, but the odds favor a bear breakout below the January low at some point in the next several weeks.