By breaking above yesterday’s high, the bulls achieved their minimum objective of at least one more leg up after Wednesday’s bull reversal. The bulls want to get back above yesterday’s high. Since Tuesday’s high is a major lower high on the 60 minute chart, it is a magnet. In addition, the current price is close enough so that the odds are that the Emini will try to get there today. The bulls need consecutive big bull trend bars before traders will believe that the rally will reach the target.

The bears want today to become an outside down day. They need consecutive big bear bars to convince traders that the bulls will give up on their targets.

Yesterday was a tight trading range. Today began with big bars and several reversals. The odds are that today will not be a strong trend day up or down. However, there are targets within reach both above and below, and at least one should be hit.

While the Emini currently has a second failed breakout above yesterday’s high, the bears need strong follow-through. Without it, the odds still favor a test of Tuesday’s high today. The bulls therefore will try for a wedge pullback to the moving average and a reversal up.

The Emini went sideways yesterday after Wednesday big bear breakout and big bull reversal. Wednesday was a strong bull reversal and the bears failed to reverse the trend back down. Therefore, the odds favor at least a small 2nd leg up today.

Since today is Friday, weekly support and resistance are important. It is unlikely that the bears will get a close below last week’s low. However, the momentum up is good and the bulls might break back above last week’s high. This would make the week both an outside down and an outside up week. The open and midpoint of this week are also magnets in the final hour. If the Emini is within a few points of any magnet in the final hour, the odds are that it will get drawn to the magnet.

The Emini is up 5 point in the Globex market. Yesterday was probably a bull flag after Wednesday’s strong reversal. The bulls want a break above the 60 minute major lower high at 2570.25, and then above last week’s high of 2574.50. That would turn the weekly bar back into an outside up bar after being an outside down bar. It would therefore increase the chances for another new high next week.

The bears will try to create a double top with that 60 minute major lower high. Since yesterday was a bull flag in a strong bull reversal, the odds are against a strong bear day today. Therefore today will probably be sideways to up. 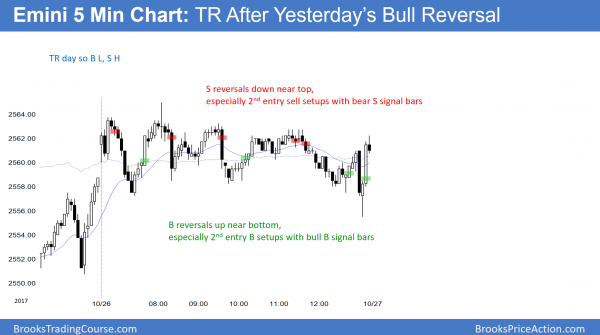 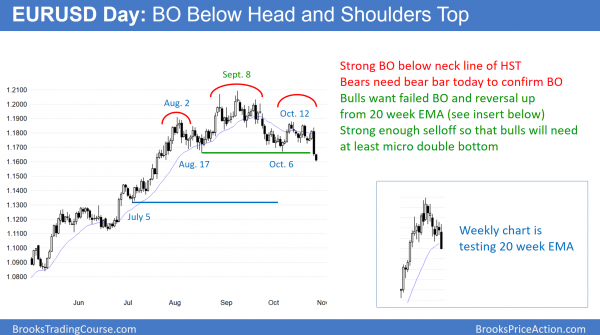 Yesterday was a big bear trend bar on the daily chart that closed below the 3 month trading range. That triggered a sell signal. The bears need another bear bar today to confirm the breakout. However, the selloff is also testing the support of the 20 week exponential moving average.

The EURUSD daily Forex chart had a big bear trend day yesterday. It closed below the 3 month trading range. That triggered a head and shoulders top sell signal. The bears want at least a small bear bar today, which would confirm the selloff. That means that it would increase the chance that the breakout will continue down for about a 400 pip measured move. That would test the July 5 low, which is the bottom of the 1st pullback after a strong bull breakout that began on June 27. Pullbacks often test the beginning of the channel. However, there is more important support between 1.1400 and 1.1500, which is the top of the 2 year trading range.

While the odds favor lower prices over the next few weeks, this selling is extreme and at the important support of the 20 week EMA. Therefore, the selling might pause over the next few days. The bulls will try to get a reversal up, and the bears will take partial profits. However, since yesterday was extremely bearish, the odds are that any rally over the next week will more likely be a bear flag than a reversal up from support. The bulls will need at least a micro double bottom and then a strong reversal up before traders will believe that the bear breakout has failed. The odds favor lower prices over the next couple of weeks.

Yesterday’s selloff continued overnight on the 5 minute chart. However, the chart went sideways for many hours and the selloff over the past 2 hours was only 50 pips. In addition, it had consecutive sell climaxes. The odds are that the bulls will try to reverse back up into last night’s tight trading range around 1.1630.

However, today’s close will be important since the bears want a bear body on today’s candlestick. This would increase the chance of lower prices over the next couple of week’s. That means the bears want today to close below the 1.1656 open. Since the bulls want a close above the open to create at least a small bull body, today’s open is an important magnet. Because that is more than 50 pips above the current price and the 2 day selloff has been very strong, the odds favor a bear close. However, the overnight pattern looks like the end of a sell climax. In addition, it is stalling at the 1.1600 big round number. Consequently, the 5 minute chart will probably begin to evolve into a trading range today. 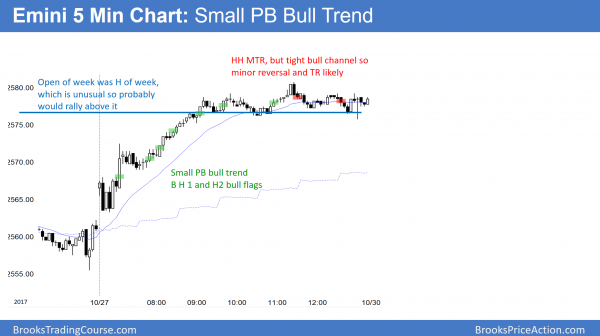 The Emini rallied in a small pullback bull trend back above last week’s high. The week in now both an inside down and inside up week. The week opened on its high and the open remained the high until today. Since bars on the weekly chart rarely have a high at the open, the odds favored a new high once Monday’s high was within a few points.

Last week closed near its open on the weekly chart, and therefore was a doji bar. However, despite extreme buy climaxes, there is no sign of a top. Therefore, the odds still favor at least slightly higher prices. The Emini might go sideways early next week into Wednesday’s FOMC announcement.