The Emini opened with a big gap down and then had trading range price action. The bears want a selloff today to below the November low and the September high. The bulls want a reversal up from above those levels. When there is a big gap down, the Emini often goes mostly sideways for an hour or two and forms a trading range. There is often a double top or double bottom, or a wedge top or bottom, before a swing up or down begins.

A big gap increases the chances of a trend day up or down. Traders who prefer stop entries wait for a candlestick pattern like a wedge or double top or bottoms. Those willing to enter with limit orders often enter earlier, or on closes during a strong breakout.

Although there was follow-through selling, it lacked consecutive big bear bars, and bull scalpers were able to make money with limit orders. These are signs of weak selling and they increase the chances that the initial selling will be limited and that it will either lead to a trading range or a reversal up. The selling often continues for 1 – 2 hours before the reversal, but it might end at any time. Bulls will look to buy an early reversal for either a bull leg in a trading range or a swing up to above yesterday’s low.

At the moment, the Emini is trying to reverse up and is becoming Always In Long, but the bulls need a new high and follow-through buying if they are to get a bull trend day instead of a bull leg in a trading range.

The bears will try to contain the rally and then they will try for a double top or wedge below the moving average for an opening reversal down and early high of the day, and then a bear trend day.

Until there is a breakout, this is a breakout mode open for a measured move up or down. Because of the trading range price action, a strong trend day is less likely.

I said at the October high that the Emini would probably go sideways for about a month and form both a double top and a double bottom. The selloff over the couple of weeks is testing the first bottom from November 16 and it is creating the 2nd leg down. The bulls want a double bottom and then a reversal up through the top of the trading range and then to a new all-time high. The bears want a breakout below the November 16 low, which they see as the neckline of the double top, and then a measured move down.

The Emini could easily break below that low and then reverse up, creating a big high 2 bull flag with that low. Traders who trade for a living are open to anything, but they expect a big move soon because the Emini is in a relatively tight trading range just below the all-time high, and the size of the bars and of the reversals has increased over the past 2 weeks. It is in breakout mode, and traders learning how to trade the markets should see that it is beginning to move faster and further, which often happens just before a breakout.

At the moment, the Emini is down about 16 points in the Globex session, and it is still well above the November 16 low. On the daily chart, yesterday’s selloff is the 3rd push down and therefore a potential wedge bull flag. The bulls are hoping for a reversal up today, which they would see as a double bottom with the November 16 low. The bears want a strong breakout below that low.

Since the Emini is near the bottom of a 2 month trading range and most breakouts fail, the odds favor a bounce today or early next week. Also, with everyone waiting for the Fed’s interest rate announcement at the end of next Wednesday’s FOMC meeting, the Emini might want to get perfectly neutral just before the report by rallying back up to the middle of the trading range.

The momentum down over the past 2 weeks favor the bears, but the risk/reward favors the bulls. If the Emini gets back to the middle of the range at around 2050 by Wednesday, the bulls and bears will have similar probability and risk/reward.

The daily chart of the EURUSD had big bull trend bars on December 3 and 9, but each was followed by a big bear bar closing on its low. That type of immediate bad follow-through is trading range price action, and it increases the probability that the upside over the next couple of weeks will be limited. However, next week’s FOMC interest rate announcement can lead to a huge trend up or down.

This trading range price action after the strong reversal up from a double bottom with the April low might simply be due to the market trying to be neutral going into the report. The rally is stalling at a 50% pullback from the selloff that began in October, and 50% is a neutral level. Bears theoretically have their stop above the October high and their profit target at the December low. Both are about 500 pips away.

Since the EURUSD is still below the 20 day EMA, the bears probably have a slightly higher probability, but it is close to 50-50 over the next couple of weeks.

The EURUSD has been in a tight trading range for 2 days, and and day traders have been scalping for 10 – 20 pips. Many are using limit orders, 20 – 50 pip stops, and scaling in. Beginners who are willing to trade in a tight trading range should look for 2nd entry buy setups near the bottom and 2nd entry sell setups near the top, or simply wait for a strong breakout up or down and then trade in the direction of the breakout. That breakout might not come until Wednesday’s FOMC announcement. 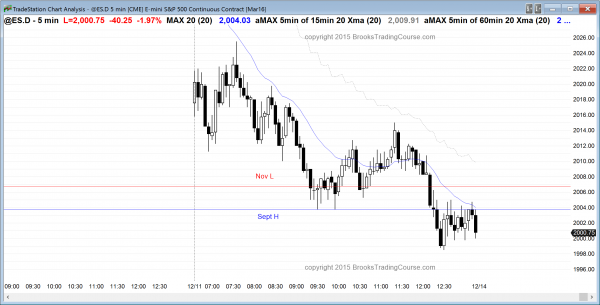 The Emini had a big gap down and then formed a trending trading range day and broad bear channel. It broke below the September high and 2,000, and then went sideways into the close.

The Emini tested below the November low, and closed around the September high, which was the breakout point for the October rally from a double bottom on the daily chart. The location is good for the bulls. The Emini has been in a trading range for 2 months and now is at the bottom. It might try to get neutral before Wednesday’s Fed announcement. It could do that by bouncing back up to the middle of the trading range over the next few days.

The bears failed to get a strong breakout below the important support of the September high and 2,000. However, the bulls failed to get a strong reversal up. This means that the Emini is still testing support, and it might test it for several more days, just like it tested the resistance at the August 17 bear trend high for the 2nd half of November. The breakout today below support was not strong and this increases the chances for a bounce on Monday or Tuesday. Next major support is at the October 14 higher low ans bottom of the channel around 1970.