The Emini gapped down and triggered the Low 5 sell signal on the daily chart. It reversed up after closing the gap above Thursday’s high and the test below the 60 minute moving average. The initial reversal up was not strong. The 1st 2 bars were not big and they had prominent tails. Like yesterday, this early price action increases the chances of a lot of trading range price action today.

When there is a big gap down, the Emini is usually limited on the downside. It can selloff for an hour or so, but then it usually goes sideways for a couple of hours until it reaches the moving average.

A gap down is often followed by a bull trend. However, the bulls usually have a good buy signal bar, and today did not. Both limit order bulls and bears made money in the 1st few bars. This is a trading range open. While there might be a trend today, most traders will continue to scalp unless they see a strong signal bar and good context, or a strong breakout in either direction.

I have been writing for over a week about a possible Low 5 sell setup triggering early this week. Although yesterday had a bull body on the daily chart, if today trades below yesterday’s low, that would be the entry for the short. This pattern is similar to the one in October.

Because of the thin area (see my weekend post) on the daily chart, the Emini is probably going to go sideways for a month to fill in the area (the space between the two upper and two lower trading ranges of the past year). A buy climax, like the one of the past month, is usually followed by a trading range.

There is now a sell signal on the daily chart. The odds are that the Emini is in the process of converting from a bull breakout into a trading range. It is possible that there might be one more brief new high after the FOMC announcement tomorrow, but the odds are that either the Emini is at the top of the range or very close to the top.

There are also measured move targets just above, and the December 31 low of 2021 is also resistance because January gapped down the next day. The Emini is testing the close of last year. The other 4 trading ranges were 100 – 150 points tall, so this one probably will be similar.

Just like the top of the range is below the bottom of the two upper ranges, the bottom will probably be below the top of the two lower ranges. Since the daily chart has been in a big trading range for 2 years, traders should expect disappointment. Strong rallies will reverse down after going above resistance, like what is likely to happen soon, and strong selloffs will reverse up after breaking below support.

The Emini is down 12 points in the Globex session and it will probably trade below yesterday’s low. This would trigger the sell signal. While it is possible that the selloff is the start of a bear swing that leads to a break below the 2 year trading range low (the odds still favor a bear breakout of the 2 year range), it is more likely that the Emini will be sideways for a month or more.

The February rally was in a tight channel. That is a sign of strong buying. Usually the market does not go from a strong bull leg into a bear trend. It has to transition first into a trading range. This means that the 1st reversal down will be minor (a bear leg in a trading range), instead of major (a bear trend). Then, the trading range will have both a buy signal, like a double bottom bull flag, and a sell signal, like a double top. At that point, a major move would be more likely.

The 60 minute chart is overbought. In the trading room, I mentioned several times that last week’s trading range would probably be the final bull flag before a bigger correction came. That is still the case. There is still a possibility of one more push up before the correction.

The EURUSD had a strong bull reversal on Thursday, but it was in the middle of its yearlong trading range. The trading range is forming lower highs and higher lows, and is therefore also a triangle. Trading ranges are built from two legged moves up and down, and the 2nd leg is often stronger than the first. It is usually a breakout that makes traders hopeful that the trading range has ended and a trend has begun.

Markets have inertia and are resistant to change, so 80% of those strong 2nd legs are traps (Second Leg Traps) and reverse. The rally was a 2nd leg up from the March 2 low and it might be a small 2nd leg bull trap. The momentum was strong enough so that at least a small 2nd leg up is likely. The minimum would be a 1 day test of Thursday’s high. It might come after tomorrow’s FOMC announcement. However, it is not necessary and the EURUSD daily chart could simply turn down from here and form the right shoulder of a Head and Shoulders Top Bear Flag (the left should was the rally that ended on December 15).

The bulls want a breakout above the February 11 lower high because that would be a sign that the yearlong trading range might have a bull breakout. The bears want a break below the January 5 higher low. The first breakout of a triangle has a 50% chance of success, and a 50% chance of failing and reversing.

Beginners should never be upset when they look at a chart and see reasonable arguments for both the bulls and the bears. Instead, they should look at confusion as a personal radar that is detecting a trading range. In a trading range, nothing is ever clear. However, traders are confident that breakout attempts up and down fail 80% of the time. They therefore sell near the top and buy near the bottom, and take quick profits. They continue to do this until there is a strong breakout with follow-through.

Today is the 3rd day in the bull flag after the Thursday rally. The 60 minute chart is in a tight trading range, which many computers see as a triangle. The odds favor a bull breakout. The minimum goal is a test of the top of the bull breakout, which was last Thursday’s high. It is possible that there will be a Leg 1 = Leg 2 measured move up. Leg 1 last week was 400 pips tall.

Because the daily chart is in a trading range, the probabilities of everything gravitate around 50%. This means that a normally high probability buy setup, like this 60 minute bull flag, is not as high as it would be if the context was different. For example, the reversal up on December 3rd was at the bottom of a trading range and I kept saying that there was a 60% chance of a 2nd leg up, even if the trading range that followed lasted a month.

The EURUSD has rallied for the past 4 hours in Europe, but the rally was only 50 pips tall, and it is still within the 3 day trading range. Until there is a breakout, there is no breakout. This means that bulls will be quick to take profits until there is a strong breakout above the 3 day bull flag. The odds are that this rally will soon convert into a trading range, which means that online day traders will probably look to scalp for 10 – 20 pips, and take a lot of limit order entries, like they did on Friday and yesterday. 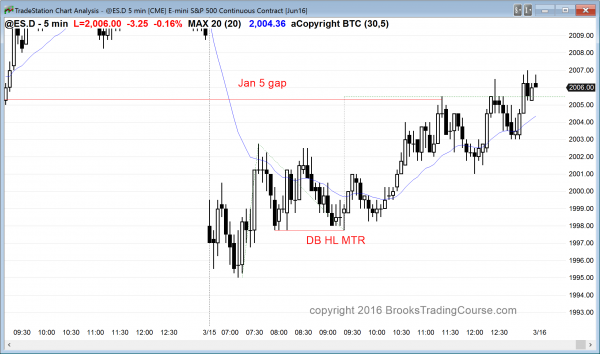 The Emini reversed up from a double bottom higher low major trend reversal, and had profit-taking at the leg 1 = leg 2 measured move target.

Today’s move below yesterday’s low triggered the Low 5 sell signal on the daily chart. Tomorrow’s FOMC announcement could create one more strong push up to the measured move targets above, but the Emini would then probably begin to reverse down and form a trading range for the next money. The trading range is likely whether or not there is one more new high to this rally.

Less likely, the rally will continue, or the reversal down will relentless fall to below the bottom of the 2 year trading range. The Emini is at resistance on the daily chart and tomorrow has a market moving announcement at 11 am. The odds are that the quiet trading range price action of the past 2 weeks will continue up to the report.