The Emini is having a trading range open. It tested the low of the 5 day trading range on the open. The bears see Tuesday’s low as the neck line of a double top. They therefore want a breakout and measured move down. Most breakout attempts fail. Hence, it is more likely that the early selling will not get too far before bulls buy. The bulls want a double bottom with Tuesday’s low.

Yet, trading ranges have inertia. The odds are that it will continue today. Therefore, today will probably have both at least one swing up and one swing down. Because the Emini is near the bottom, it is more likely that it will have an early swing up. However, trading ranges often fall below support before reversing up. Therefore, the bulls might wait for a breakout below Tuesday’s low before buying.

The Emini yesterday traded above the top of the 12 day bull micro channel. It therefore met the minimum goal. While the rally after the 1st pullback often last 3 – 5 days before evolving into a trading range, yesterday might be the start of the trading range. In addition, the extreme micro channel means that the bulls are exhausted. Furthermore, the December 14 FOMC report might also make traders hesitate. As a result, the Emini will probably not go far up or down for at least several days.

While most days for several weeks have been trading range days, they also have had swings up and down. This will probably continue. A strong trend day can develop during any day. Yet, most strong trends have ended up as swings in trading ranges. Until the character of the market changes, traders will bet on inertia. They will buy low, sell high, and take quick profits. Yet, because there have been swings during most days, they will often swing part of their position. 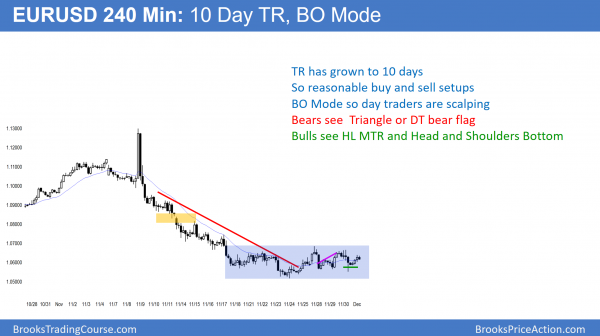 The EURUSD 240 minute chart had a strong selloff to just below the December 2015 low, yet stalled in a tight trading range for 10 days. As with all trading ranges, there are both reasonable buy and sell setups. Day traders will scalp until there is a breakout.

The EURUSD daily chart has been sideways for 10 days. While the momentum down was strong in November, the follow-through has been bad. Bulls bought around the December 2015 low. Because the Emini has been in a trading range for 18 months, traders are correctly betting that even strong breakout attempts will fail.

The current trading range has probably not gone high enough to find enough sellers to create a successful breakout below the December 2015 low. As a result, this bear rally will probably go up at least 200 pips from the low. Furthermore, it will probably test lower highs on the 240 minute chart. It might even reach the October low, which was the breakout point.

Yet, the 1st rally will probably be minor, which means a bull leg in a trading range. As a result, it will probably lead to one more test down. At that point, the bulls can try to create a major trend reversal. If successful, the bulls would have a better chance to get back about the October low and resume the 18 month trading range.

The bears need a strong breakout below the December 2015 low to change the market on the daily chart back to a bear trend. while there eventually will be a successful breakout up or down, the odds are that every attempt will fail. Therefore, this attempt by the bears will also probably fail.

The bulls want a rally, but it will probably be limited to a test of resistance. Therefore a bull breakout would not end the 18 month range either. 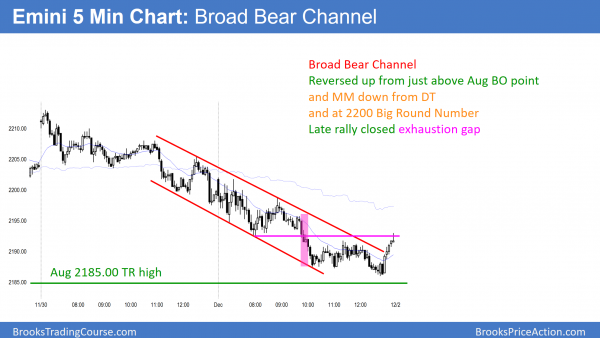 Yesterday’s broad bear channel continued all day today. The Emini tested to just above the August high, which was the breakout point. It reversed up at the end of the day to close the gap below the upper trading range.

The Emini continued down in its 2 day broad bear channel after yesterday’s new all-time high.

Because the top was minor and the 3 week rally was strong, this selloff is probably minor. Hence, it will probably be a bull flag and lead to a test of the high. While the selloff can continue down, it will probably find support just below at the August high, or at the November 11 bottom of the bull channel, around 2150. The odds still favor sideways for a couple of weeks into the FOMC meeting.