While the Emini gapped up, the 1st 2 bars were dojis, which is weak buying. Furthermore, the Emini opened at the top of the 9 day channel. While there is a measured move target from the election gap at around 2207 and a leg 1 = leg 2 target there as well, this is a weak open. As a result, the gap will probably close. Yet, most opens in the 9 day channel had early selling, but then buyers came in.

Yesterday was a quiet day. These early small dojis at resistance increase the chances that today will also be a quiet day.

This is a limit order open. If there is a 2nd reversal down from above yesterday’s high, especially with a strong sell signal bar, that would be a reasonable short for a swing down.

The bulls need a better buy setup, like a double bottom or wedge bottom around yesterday’s high or the moving average. Yet, because the Emini is at the top of a 9 day channel, the odds are that a bull breakout will fail and reverse within about 5 bars on the 15 minute chart.

A strong trend can come at any time, even in an overbought market. If there is a strong breakout up or down, traders will swing trade. Yet, this early tight trading range after yesterday’s quiet trading make a trading range day likely.

The Emini has been in a tight bull channel on the daily and 60 minute charts since the Trump election rally. Because the 2 week trend is a Spike and Channel bull trend, the odds favor a trading range soon. Bull channels are bear flags. Hence, 70% have a bear breakout. Yet, the bear breakout can simply come from a sideways move instead of a reversal down.

Buy climaxes can extend for a long time. The next target above is the 2200 big round number. That is also around the top of the bull channel on the 60 minute chart. Therefore, traders will be looking for a reversal down around that area. Since the bull channel is tight, the bull trend is strong. Therefore, the best the bears can probably get over the next couple of weeks is a pullback and a trading range. While a bear trend can come at any time, the odds are against this for at least a couple of weeks.

Can this rally continue for several more weeks in a tight bull channel? While possible, that is unlikely. The odds favor a pullback into a trading range lasting 5 or more days.

While the Emini rallied for 5 hours to above the 220 big round number, it has been in an endless pullback since. The 8 day parabolic tight bull channel is a buy climax. There is a 60% chance of a bear breakout below the channel and then a trading range beginning within 1 – 2 weeks. It can come any day.

Yet, the bulls could get a bull breakout above the bull channel. However, there is a 75% chance that the bull breakout would fail. Hence, that would probably be the start of 2 weeks of sideways to down trading. 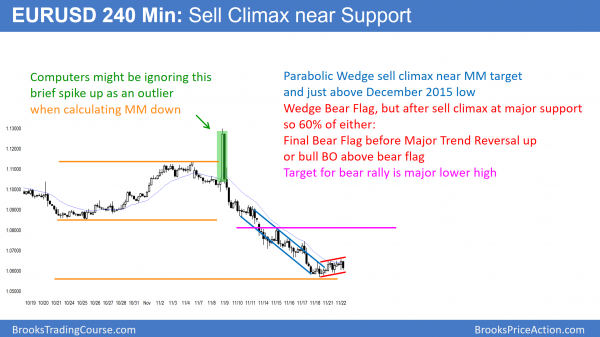 The 240 minute EURUSD Forex chart has a sell climax down to a measured move target. It is also just above the December 2015 low. There is a 60% chance of a bear rally soon. It will probably last at least a couple of weeks.

The EURUSD sell climax has no bottom yet. Furthermore, there is still room to the December 2015 low. Yet, because of the extreme selling, the odds are that the bears will take at least partial profits soon. When the protective stop is far, as it is now, bears will want to reduce risk. The easiest way is to take some profits.

As a result of the extreme selling, the correction might rally for more bars and more pips that what seems likely. Hence, the bulls might get a 2 week rally that tests a major lower high or the October 25 breakout point. Therefore, it could last 200 points.

For the bulls to get a trend reversal instead of a bear rally, they will probably need a major trend reversal on the 60 minute chart. That would probably take at least 2 weeks to develop.

While the selloff has strong momentum, it is still above prior lows. It is still above the bottom of the 18 month trading range. Until the bears get a strong breakout below the range, the odds are that this selloff will probably be simply another leg within the range.

Obviously, the range will eventually break out. Yet, the odds favor at least a 2 week rally before the bears will be able to succeed. Furthermore, the odds are that they will fail, and the trading range will continue longer than what bears want.

The bears want a strong breakout below the December 2015 low. Yet, this climactic selloff will attract profit takers. The risk to the protective stop is too great for many institutions. While it is possible for the bears to get their big breakout without a bounce, a 2 week rally is more likely. Hence, if the EURUSD falls below that December 2015 low, the breakout will probably be brief and lead to a 2 week rally. 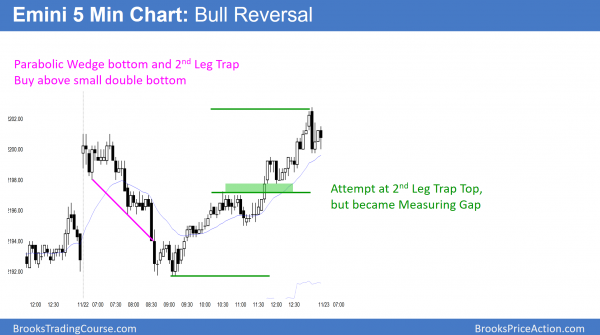 After a reversal down from above yesterday’s high, the Emini formed a double bottom with yesterday’s low. It also was a 2nd Leg Trap, a Parabolic Wedge, and a small Double Bottom. The bears tried to create a 2nd Leg Trap Top, but the breakout became a Measuring Gap.