The Emini opened within a 4 hour trading range and went sideways for the first hour. It was in breakout mode and had a bull breakout, but the follow-through was weak and the breakout might fail and become the high of the day. The bears need a strong reversal down so create the high of the day. Otherwise, the channel will probably continue for another hour or two.

The bad follow-through was likely because of the 4 hour trading range, but the breakout was strong enough so that the odds still favor follow-through buying and a measured move up. Until there is a strong breakout up or down with strong follow-through, day traders will trade this like a trading range or weak bull channel and buy low, sell high, and scalp.

Since the current 3 day rally has lacked many consecutive big bull trend bars on the 15 and 60 minute charts, the odds currently are that it is a bear rally and a bear flag. However, there is no sign of a top and it is possible that the Emini will have a bull breakout of this bear flag and then a measured move up.

When a rally is weak like this, it spends a lot of time going sideways, as it has. That sideways movement is what makes traders see the rally as weak.

I mentioned this weekend that the Emini has about a 60% chance of closing down on the year, despite rallying last week off of last year’s close. The odds are that the current rally is a bear rally and that the Emini will have at least one more push down on the daily chart, and it should fall below the bottom of the monthly moving average, which is below 1,800 today. Since it is rising, if the Emini takes a few months to get there, the average might be above 1,800 when the test finally occurs.

The bulls want the current rally to reach above breakout points, like the August low of 1891.75 (touched on Friday) and the October 8 double bottom low of 1918, and then above prior lower highs, like the October 6 high of 1971. This could convert the bear trend into a trading range. I mentioned in early January that I thought that 2014 would probably become a big trading range, and it has. 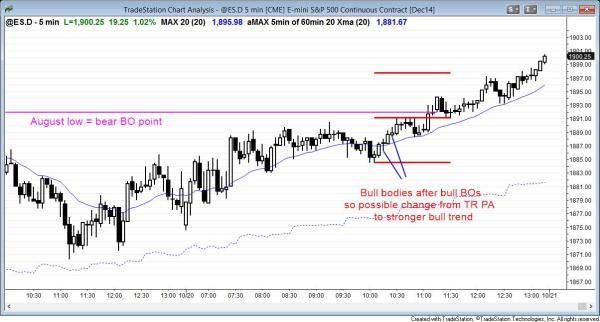 The Emini had a couple of strong bull breakouts early and entered a broad bull channel. The two small breakouts after 10 a.m. each had follow-through bars that had small bull bodies. The character of the price action changed into that of a stronger bull trend.

The Emini became increasingly bullish as the day went on and there are targets above. Although today’s bull channel will probably become a bear flag and be followed by at least a couple of hours of selling tomorrow at some point, the rally was strong enough so that the stock market might first rally for an hour or two.

The Emini began the day as a broad bull channel, and converted into a small pullback bull trend in the middle of the day. Although the change was subtle, it led to a strong rally for the rest of the day. At 10:10 a.m., there was a small bull trend bar, but it was followed by another bull body instead of a bear body. This happened again on the following bar. The bulls began to take control and formed 6 consecutive bull trend bars.

The rally went back above the August low, which was the low of a 4 month trading range. The next target is the October 2 and 8 double bottom, which is the breakout point that led to the parabolic wedge selloff last week. I believe that the stock market has been in a trading range all year and that the rally over the past many months has been a bull leg in a trading range.

Although the current bull reversal is very strong and this is a seasonally very strong time of the year, I think that the odds are that the bulls will soon be disappointed, just as the bears have been. Disappointment and confusion are hallmarks of trading ranges. If the rally goes above that double bottom low, I think that the odds are the upside breakout will fail and the Emini will test down. Also, the monthly chart still has not reached the moving average below. This is a magnet that will tend to limit the upside potential.

There is no sign that the current rally is about to end and there are targets above. If the rally gets above the October 8 low, it could test the October 8 high, which is a lower high, around 1960. However, if I am right and this is a year long trading range, every strong rally will fail and disappoint the bulls, just as the extremely strong bear leg last week has reversed up and disappointed the bears. Traders do not know where the top or bottom of the range are, but they believe the stock market is in a range. This means they will sell rallies and scale in higher. They will buy selloffs and scale in lower. They will take quick profits. The result is more up and down trading range price action over the next several months.

If there is a strong breakout up or down with strong follow-through, then the price action will have changed. Until that happens, the market is most likely in a big trading range from 1750 to 1800 on the downside and 1900 to 2050 on the upside.