The Emini broke above yesterday’s 2 hour trading range, but a trading range late in a bull trend, especially one with a lot of bear bodies, is usually the final bull flag. This means that today will probably trade back into that range and go sideways again at the price.

The odds are that today will be a trading range day. It is unlikely to be a bull trend day because of the buy climax. It is more likely to be a bear trend day than a bull trend day, but the 2 hour trading range at the end of yesterday is a magnet and it will tend to limit the downside. The most important price on the chart is the December 31 close of 2026.25, so if there is a bear trend, that will be the magnet.

The open had reversals and bulls and bear made money. This is trading range price action, and the Emini will probably be in an early trading range. The bulls would like a bull breakout late in the day as a sign that they are strong enough to get to a new all-time high. The bears will look for a major trend reversal within the range and then a late bear reversal, putting a tail on the top of the weekly candlestick.

There should be at least one swing up and one swing down today because that is what’s needed to create a trading range. No one knows which will come first. If there is a strong breakout or a reliable candlestick pattern, day traders will take a swing trade. At the moment, they are scalping. Traders will probably look to scale into shorts at new highs, betting against a continued strong bull trend, and betting that every breakout will fall back below its breakout point. They will bet against bull measuring gaps. However, if the day becomes a strong bull trend day, even though that is unlikely, they will trade it that way.

The Emini has a trading range open and it is deciding if the 1st swing will be up or down. If it is up, it probably will result in a high of the day within the 1st 2 hours.

Although the Emini rally has been strong, it is climactic, and there is still a 70% chance that what I said before the FOMC report is true. I said that if the Emini rallied after the FOMC report, the rally could continue for about 3 days, but that the odds still favor a trading range for about a month. The February 11 buy climax in bonds has resulted in a trading range for over a month, and the Emini will probably do the same because that is what happens 70% of the time after buy climaxes. Climaxes often go much further than what seems logical, and the one in the Emini is an example. However, the result is usually the same.

How tall will the range be? If it goes one for 2 – 3 months, it could be more than 100 points tall. If it lasts for only a few weeks, it could be tight, which would be about 50 points on the daily chart. There is still a 30% chance that the current rally could continue for another couple of weeks and get back up to the all-time high.

Look at the weekly chart and what do you see? Six consecutive bull trend bars. How often does that happens, and what happens after it does? It is unusual and therefore unsustainable and climactic. The odds are that it is at or near the end of the micro channel, and there will be a brief sharp reversal down, like in December 2014 and November 2015. A 6 bar bull micro channel on the weekly chart is climactic. It is also a sign of very strong bulls. This means that the bulls will eagerly buy the 1st reversal down, and the reversal will therefore be minor. A minor reversal means that it leads to a trading range instead of a bear trend.

The Emini is up about 6 points in the Globex market, and it is overbought and at resistance on the daily chart. This is a good combination for the bears over the next week. One way to trade it is to buy puts on a rally today above yesterday’s high. Institutions make money selling puts because they are a wasting asset. Even if the market does not move, the value of the puts melts away and they make a profit.

It is common for the institutions to do whatever they can to make the charts look good on Friday’s for traders looking to buy puts or calls. The institutions are sellers and they need buyers. They try to make people interested in buying at a time that favors institutions. A Friday is good for them because they collect 2 extra days of time decay over the weekend.

Because it is Friday, weekly support and resistance can be important. The most important nearby price is the December 31 close of 2026.25. Last week’s high of 2012.75 is also a target. This week’s open of 2006.25 is more important because it determines if the candlestick pattern is a bull bar or a bear bar.

In either case, the Emini will probably not be able to rally for long today, and the odds are that it will pull back for about 50 points in the next few days. There is no top yet and it could go much higher, but the odds favor a pull back, and then a trading range that lasts about a month.

The EURUSD 2 day rally is the 3rd push up from the March double bottom, and it is testing the February high and a measured move up from the March 10 measuring gap (see yesterday’s comments). Because the EURUSD has been in a trading range for about a year, those who trade the markets for a living do not trust strong rallies near the top, or strong selloffs near support. They correctly assume that the continuation of the trading range is more likely that a successful breakout.

Every trading range eventually evolves into a trend, but 80% of the attempts fail. That means that the odds are that the current rally will fail as well. A third push up is a type of wedge, and it is near a major lower high on the daily chart. Even of the bulls get their breakout, the are still other lower highs above in the year long trading range. Until the EURUSD breaks strongly above all of them, every rally will probably be followed by a reversal down. There is no top yet, but the math favors a reversal down soon and the continuation of the trading range.

The rally on the 240 minute chart since the March 10 bull reversal has had a series of buy climaxes. That type of rally usually soon evolves into a trading range, which is consistent with the price action on the daily chart (a strong rally that is testing resistance). There might be one more push up to a wedge top on the 240 minute chart. The 2nd leg up was the two day rally that ended yesterday. Whether or not there is, the odds still favor a 200 pip pullback beginning in the next few days.

What happens if the EURUSD instead breaks strongly above the February high? Traders never care. They simply buy it, betting that it will test the next resistance up at the October and maybe August highs, 200 – 500 pips above. Unless there is a strong bull breakout, they will bet on the math. The odds are that either that the top of the 240 minute chart came yesterday or that there will be one more push up to a new high and then the trading range will begin. No one knows how high the range will be, but obvious support is the March 10 high around 1.1200 and then the March 16 low around 1.1050. 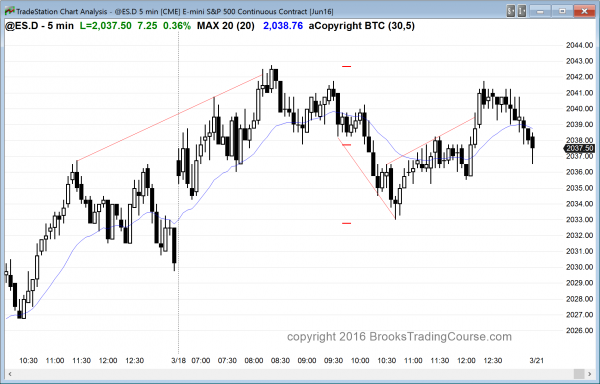 The Emini was in a trading range until the final hour when the bulls created a brief breakout.

The daily and weekly Emini charts are overbought, but there is no sign of a top and the 1st reversal down will probably be bought. Because they are so overbought, a pullback is likely early next week.