Since the Emini has been in a trading range for 2 months and this rally is probably a bear rally on the daily chart, the odds are against a 2nd consecutive strong bull trend day.

Yesterday was a small pullback bull trend. In addition, it was a breakout above a double bottom higher low major trend reversal on the 60 minute chart. Furthermore, I have been saying for several weeks that the March 15 high is a magnet. In addition, I said that the bulls would probably get one more push up in April before the bear trend on the daily chart resumes. Consequently, this might be the start of the rally to test that major lower high.

Yet, nothing has changed. The weekly chart has an unusually reliable buy climax. Therefore the odds are that this rally will fail to get much above the all-time high. More likely, it will fail around the March 15 high. It therefore would form a double top lower high major trend reversal on the daily chart. The odds still are that the daily chart’s lower highs and lows are the early stages of a bear trend. Furthermore, this bear trend probably will test the December close within a couple of months.

The Emini is up 3 points in the Globex market. Yesterday was a strong reversal up from a double bottom higher low major trend reversal on the 60 minute chart. Furthermore, there was no clear top yesterday. In addition, the lower highs since March 15 are magnets. Hence, the odds are that the Emini will rally further over the next few days.

Because yesterday was a breakout from a wedge bottom, the odds favor at least some follow-through buying today. Yet, the Emini is still in a 2 month trading range. Consequently, the bulls will probably be disappointed by the lack of a breakout above the range. In addition, the weekly chart has a high probability of pulling back to its weekly moving average within a month. Hence, the daily chart is probably having a bear rally in an early bear trend. 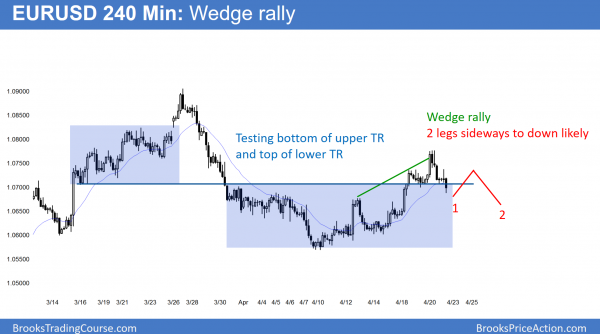 The 240 minute EURUSD Forex chart is pulling back from a wedge rally. It will likely have 2 legs sideways to down. Since this week’s rally strong, the chart will probably go sideways for a couple days before having a 2nd leg down.

The EURUSD Forex market had a wedge rally on the 240 minute chart. Furthermore, it retraced about have of the selloff from the March 27 high. It is testing the bottom of the March 16 – 24 trading range and the top of April trading range. Hence, it is at a support level. In addition, this week’s rally was strong. Consequently, the chart is unlikely to sell of strongly for at least a couple of days. This confusion makes a trading range likely for a couple of days. Yet, that range will probably be a pullback from the 1st leg down that began yesterday. Since a wedge rally usually leads to 2 legs sideways to down, there will probably be a 2nd leg down next week.

Since the weekly chart has been in a trading range for the past 6 months and it is now near the apex, there will probably be a breakout up or down within a month or two.

The EURUSD Forex market has been in a 20 pip trading range for the past 4 hours. It will probably be sideways for at least another day, and then have another leg sideways to down. Since it has already retraced about 50% of this week’s rally, the reversal has already met the minimum price goal for the wedge. Yet, it has not met the time goal. Usually a reversal from a wedge lasts about half as many bars as there were in the wedge. Consequently, the pullback from yesterday’s high will probably last longer.

Because of the French vote over the weekend, there could be a big move up or down starting on Sunday. This uncertainty increases the odds of a quiet day today. 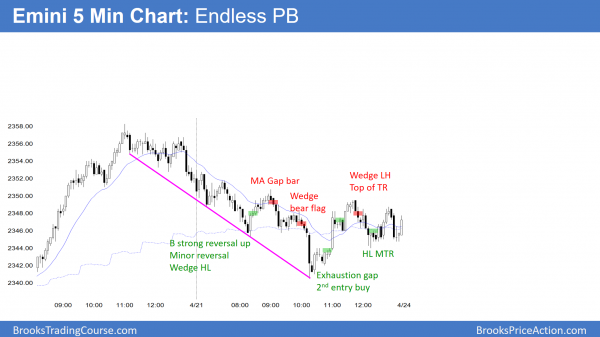 The Emini continued down today, but the selloff ended with a big sell climax. The bulls want a higher low major trend reversal up on Monday.

While the selloff was a low probability event after yesterday’s strong rally, it ended above yesterday’s low. The bulls want a higher low major trend reversal up Monday. The bears want a collapse after this weekend’s French vote, and then a strong break below the March 27 low. The odds still favor a 1 – 2% bounce before the 7% correction. Yet, there is a 70% chance of at least a 5% correction over the next 2 months.