Today’s open continued yesterday’s late, weak rally. Because yesterday had Gap Bars, the odds are that this early rally will lead to an attempt at a major trend reversal in the 1st hour or 2. Since there are 6 consecutive bull bars, bears have a better chance of a profit if they wait for at least a micro double top or a strong reversal down.

Bulls want a strong breakout and a trend from the open bull trend. While it is possible for today to be another strong bull trend day, it is more likely that this initial rally will not go more than an hour or so.

The probability favors a swing down starting with the 1st 2 hours. In addition, the 2 day rally will probably evolve into a trading range today. Yet, there is no top yet and the Emini is currently Always In Long.

The Emini rallied yesterday, but sold off from a higher high major trend reversal. The selloff was strong enough to make sideways to down likely today. While the selloff formed gap bars (highs below the moving average), the bulls will need a strong rally to reverse yesterday’s late selling. Because a rally from gap bars in a strong bull trend usually leads to a major trend reversal attempt, the odds are that any rally today will not get far.

In addition, the 60 minute chart has been in a tight bull channel for about 20 bars. Because that is unusual, it is unsustainable. It is therefore a type of buy climax. As a result, the Emini will probably go sideways to down for about 10 bars on the 60 minute chart. Hence, for a day or two. It therefore might stay sideways into Wednesday’s FOMC Fed interest rate hike.

Today is Friday and therefore weekly support and resistance is important. The bulls want the week to close on its high, which would therefore be a confirmation of the strong breakout.

Because the breakout was so big, there is no major weekly support nearby below. Yet, it is within 20 points of the top of the bull channel from the November 2015 and August 2016 highs. Hence, iIf the bears get their selloff today to that support, the selloff would put a tail on top of the weekly candlestick. That would therefore make the bull breakout slightly weaker.

In addition, the Emini broke above a channel from the November 10th and 25th highs. That is minor resistance and the Emini stalled there yesterday.

The Emini is up 2 points in the Globex session and traded in a tight range. Yesterday’s bear reversal was strong enough to limit the chances of a big rally today. Yesterday was likely the start of a trading range and that will probably continue today. In addition, a strong leg down like that usually has a 2nd leg down. As a result, there will probably be at least one bear swing today. 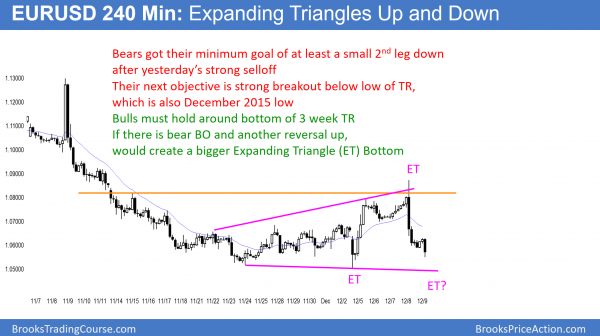 The 240 minute chart is forming Expanding Triangle Bottoms and Bear Flags. It is in Breakout Mode for a Measured Move up or down.

The EURUSD Forex chart reached the goal of going slightly above the bottom of the 4 month trading range yesterday. Yet, it then sold off violently. The selloff was strong enough to limit the upside for the next few days.

Because the selloff stalled in the middle of the 3 week rally, the chart now has a Big Up, Big Down pattern. As a result, traders are confused. Since confusion is a hallmark of a trading range, the odds are that the EURUSD will be sideways going into Wednesday’s FOMC Fed interest rate hike.

Yesterday’s selloff was strong. Therefore, traders expected at least a small 2nd leg down, which came overnight. The bulls need another reversal up. A reversal up from here would create a higher low major trend reversal. A reversal up from a breakout below the trading range low would be another expanding triangle bottom.

The bears want a strong breakout below the triangle, and then a measured move down. Since the triangle is about 350 pips tall, the target would be around 1.0150. That is near the Big Round Number of par (1.0000), which is a strong magnet. In addition, it would be a break below the bottom of the 2 year bear flag on the monthly chart, although still well above the October 2000 low of 0.8227.

Because the EURUSD is still in a trading range and the catalyst of the FOMC report is only a few days away, the odds are against a breakout before then. Therefore, probably bulls will start to buy and bears will buy to take profits. As a result, the EURUSD will probably be sideways to up in a narrow range for a few days. 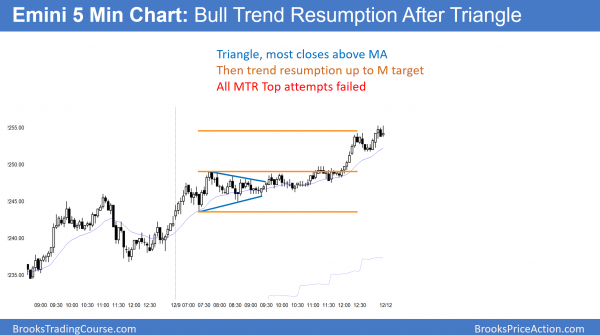 The bears were unable to create a successful major trend reversal after yesterday’s moving average gap bars. Instead, the Emini held mostly above the moving average and formed a triangle. The bulls got trend resumption up at the end of the day.

The Emini closed at another new high today. The channel up that began yesterday will probably be a bull leg in a trading range. While there is no top yet, the Emini will probably pull back on Monday and Tuesday before the FOMC rate hike on Wednesday.