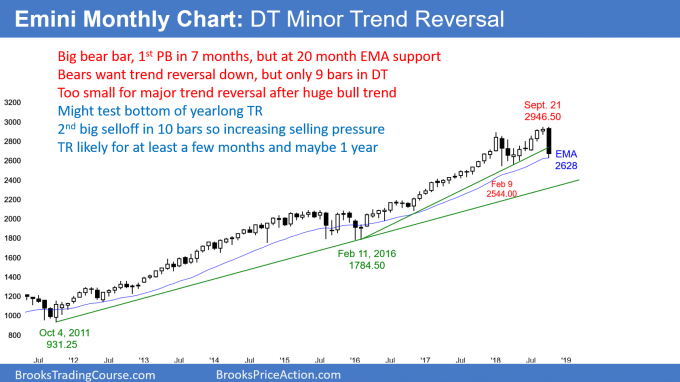 The candlestick on the monthly S&P500 Emini futures candlestick chart is a big bear trend bar with 3 days remaining in October. This is the 1st touch of the 20 month EMA since February 2016.

The monthly S&P500 Emini futures candlestick chart is still in a bull trend. It is now touching the 20 month EMA for the 1st time in more than 20 months. This is therefore a 20 Gap Bar buy setup. However, the bear bar is so big that the chart might have to go sideways for a few months before the bulls will be confident of support.

At the end of last year, I repeatedly wrote that the monthly, weekly, and daily charts were the most overbought in the 100 year history of the stock market. I further said that the trend was therefore unsustainable and it was likely to end soon.

A bull trend usually does not become a bear trend without first entering a trading range. I therefore wrote that the Emini would probably enter a trading range that would last 1 – 2 years, like in 2014 – 2016. So far, what has unfolded in 2018 is consistent with all of the above.

The bears are hoping that the January-September double top will lead to a measured move down below the February low and create a bear trend. That would be unusual. This is because the double top only has 9 bars and the bull trend has lasted about 100 bars on the monthly chart. In addition, the bull trend has been in a tight bull channel. This small of a top is unlikely to be enough to turn a bull trend into a bear trend. A trading range is therefore more likely.

In fact, as strong as the October selling has been, the monthly chart has this week barely pulled back to the 20 month EMA. Since it has been above that average for a long time, the bulls have been willing to pay an above average price. Many will be eager to buy at the average price, especially if there is not strong follow-through selling in November.

In February, I said that there would probably only be 1 – 3 month pullback and then a rally to a new high. I wrote that the new high typically lasts only 1 – 3 months before there is another reversal down. Finally, I wrote that at that point, the market usually forms a trading range. This is what is happening now.

October is a surprisingly big bear bar. Surprise Bars typically have at least a small 2nd leg down. As a result, even if there is a reversal up next month, it will probably only last for 1 – 2 months. Traders will sell the rally and the Emini will likely have to test the October low 2 or 3 months from now.

If it reverses up at that point, there will be a micro double bottom in addition to a double bottom with the February low. Then, the bulls would have a reasonable chance to reach the measured move target at around 3200, based on the 300 point tall yearlong trading range. 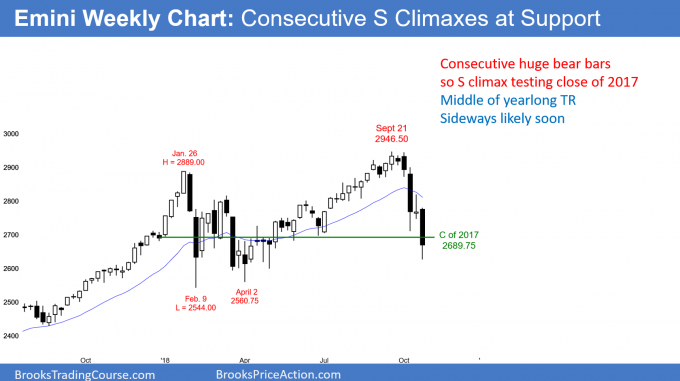 The selloff from 2 weeks ago on the weekly S&P500 Emini futures candlestick chart was strong enough to make at least a small 2nd leg down likely. This week fulfills that goal. The Emini is now in the middle of the 2018 trading range and testing the close of 2017.

The weekly S&P500 Emini futures candlestick chart sold off again this week. Since last week was a bull doji inside bar, it was a weak sell signal bar. That means that a protracted selloff was not likely.

However, the yearlong trading range will probably continue for many weeks before there is a breakout of the range. Trading ranges resist breaking out and they last longer than what seems reasonable. 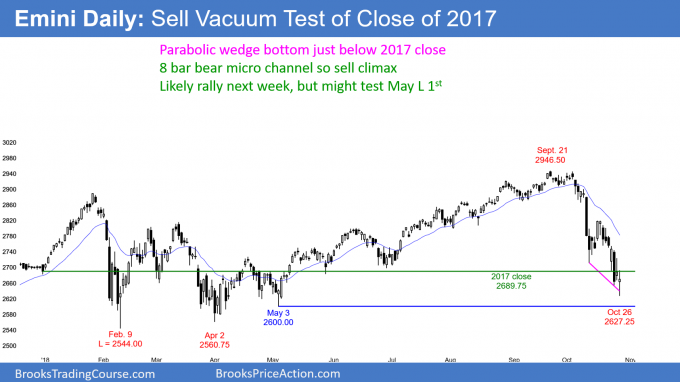 The daily S&P500 Emini futures candlestick chart had a 2nd strong leg down this week and closed below the close of 2017 on 3 consecutive days.

The daily S&P500 Emini futures candlestick chart is back to last year’s close. Since it oscillated around that price for the 1st half of the year and it is now back there, the price is still important. The Emini might trade around it again for a couple of weeks before deciding whether to test the February low or the September high.

With the election in 2 weeks, there is an increased chance of a sideways market until then. This is especially true after 2 climactic selloffs down to support.

Every bar for the past 7 days had a high below the high of the prior day. This is an 8 bar bear micro channel. Look at the daily chart and see how often there is an 8 bar micro channel up or down. It is rare. Therefore it is unsustainable and a sell climax. Consequently, it will probably end on Monday or Tuesday. That means that traders will expect Monday to rally above Friday’s high or Tuesday to rally above Monday’s high.

An 8 bar bear micro channel is a sell climax, but it is also a sign of strong bears. Consequently, the 1st reversal up in minor. Therefore the Emini will probably only rally for 1 – 3 days before there is a pullback below the low of the prior day.

There is a wedge bottom on the daily chart using the October 11, 24, and 26 lows. That increases the chance of a couple legs sideways to up. Also, October 26 to November 6 is seasonally bullish. In addition, the Emini oscillated around last year’s close repeatedly for the 1st half of the year. Finally, big selloffs in October often lead to rallies for the rest of the year. All of these factors reduce the downside risk over the next couple of weeks.

It is important to note that the early October selloff was strong enough to have a 3rd leg down. Therefore, traders will look to sell a rally next week if it looks weak. If there is then a new low and a reversal up, there would be a bigger wedge bottom. The October 11 and 26 lows would be the 1st 2 legs down.

Wedge bottoms contain sell climaxes, which exhaust the bears. They begin to take profits and then wait for a couple legs up before selling again. The bulls know this and they buy. The result is that the wedge bear channel reverses up and typically evolves into a trading range. That is what is likely over the next month.