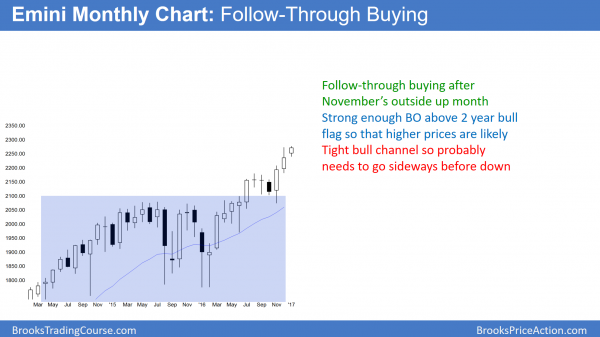 The monthly S&P500 Emini futures candlestick chart this month is a bull bar so far. Yet, last month had a tail on top and a smaller body. December was therefore not strong buying after the November rally. Yet, the bulls are still in control. In addition, the 1 year channel is tight. As a result, bulls will probably buy the 1st reversal down.

Hence, the bears will probably need at least a micro double top before they can create a swing down. Since that would take at least another month or two, the downside risk is small in January. 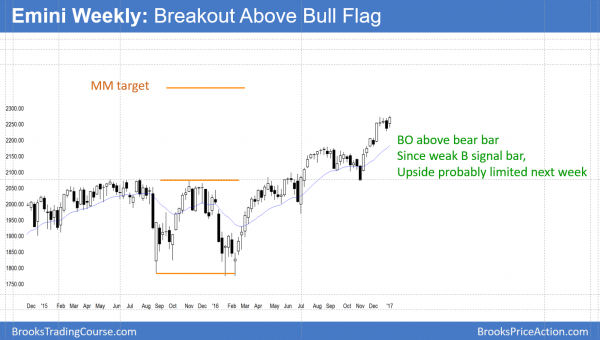 The weekly S&P500 Emini futures candlestick chart broke above a 3 week bull flag. Yet, last week’s buy signal bar was a bear bar. It therefore reduces the probability of a strong rally from here.

The weekly S&P500 Emini futures candlestick chart broke to a new all-time high on Friday. In addition, it was the entry bar for a breakout above a 3 week tight trading range. Hence, it broke above a bull flag. Since the prior week was was the buy signal bar and it was a bear bar, the setup was weak. This therefore reduces the chances of a big breakout.

Yet, the 2 month bull trend is in a tight bull channel. Therefore, bulls will continue to buy every reversal down. The bears probably will need at least a few weeks of sideways to down trading before they will be able to create a reversal. As a result, the near-term downside risk is small.

Gap above August trading range will get filled

There is a gap below the lows of the past several weeks and the August 2179.75 top of a 4 month trading range. Because gaps usually get filled when they form late in a trend, the odds are that this one will as well. Therefore, the odds are that the Emini will trade down about 100 points within the next couple of months.

Since there is no sign of a top and the bull channel is tight, the bears will probably first have to halt the rally for a few weeks. They then can try for at least a micro double top. While the reversal down can come without a top, that is less likely. Yet, if there is a strong reversal down in the next week or two, traders will begin to believe that the selloff will fall to the August high. 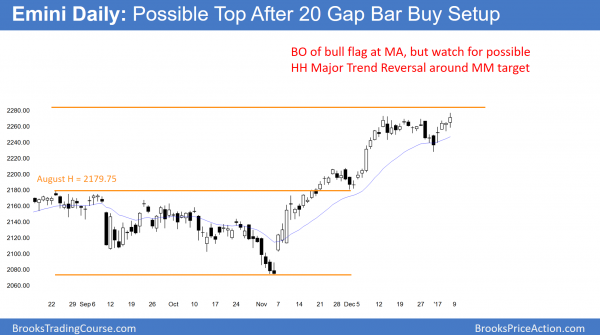 The daily S&P500 Emini futures candlestick chart broke to a new all-time high on Friday. It sold off slightly at the end of teh day after the Dow repeatedly failed to get above 20,000

The daily S&P500 Emini futures candlestick chart broke to a new all-time high on Friday. Yet, breakouts need follow-through buying. Therefore, Monday and Tuesday are important. The bulls will try to make one or both become a bull bar. Hence, that follow-through buying would increase the odds of higher prices.

Because bears always want the opposite, their minimum goal is to create a bear bar on Monday or Tuesday. Hence, traders would then think that Friday’s breakout might fail. That bear bar would then be a sell signal bar for a failed breakout and for a higher high major trend reversal.

Because 60% of strong major tops lead to trading ranges or trend resumption up, the bears know that they probably will not make money. Yet, the Trader’s Equation is still positive. This is because a swing down would lead to a reward at least twice as big as the risk. That good risk/reward is more than enough to offset the low probability.

Bears wanting higher probability will wait for a strong reversal down before selling. The trade-off is that their stop is then far. Hence, when a trader wants high probability, he has to accept worse risk/reward. That always is the case because there has to be a reason for an institution to take the opposite side of the trade. If you get good probability, he gets good risk/reward.

The Dow got to within 4 cents of 20,000 on Friday. Every big round number is a psychological barrier. It makes the news and therefore everyone is aware of it. How strong is the resistance? Well, 8 years ago, the Dow was at 7,000. All of the big round numbers above it were resistance. This therefore includes 10,000, which is a very big round number, like 20,000. Yet, the Dow broke strongly above every one of them. Hence, the numbers belong more in cocktail party conversation than in a serious discussion about meaningful resistance.

January effect and other seasonal tendencies

There is a belief that January tends to rally because of people who receive year-end bonuses use the money to buy stock. Whenever something is obvious, it is priced in before the event. Therefore, the market is already where it needs to be to accommodate that buying before January begins. As a result, the January effect is fiction for traders because it cannot make them money.

My notes about January and end of the year statistics

The year is up 68% of the time and down 32% since 1927.
In any 5 day period, there is a 56% chance of the market being up.
The last 5 days of the year have a 77% chance of being up, and 10 times more than the average 5 day period.
If the 1st 5 days of January are up, January is up 76% of the time. However, all months are up 65% of the time, so this is only a small improvement.
When the first 5 days are negative, January is down 60% of the time, instead of only 35%.
If January is up, the year is up 82% of the time, and the average gain from February to December is 8.5%.
When January is down, the average gain from February to December is only 1.7%, and the year has a 58% chance of being down, instead of the usual 33%.
If January is down 6%, then the entire year is down 5%. As a result, the rest of year is up only 1%, so the gain is small.
In January over the past 90 years, small cap stocks are up 4% and large caps are up only 1.5%. so it is better to focus on small caps.
When the market is up 20% or more, many managers are behind and look to catch up by buying momentum stocks, like FB, TSLA. This can cause them to rally, even if the market is falling in December.

If the year is a small pullback bull, then most traders will hold in the final days of December to avoid taxes on their gains. The result is that many stocks will stay up.
The 4th quarter is up 2.6% on average for the past 100 years, and it is up 72% of the time. If the S&P is negative year to date at the end of the 3rd quarter, it is down 0.7% in the 4th quarter, and it is down in the 4th quarter 47% of the time. Even though the average is down, the median is up 1.8%, which means the down years are bigger than the up years.

What does this mean?

For a trader, this is meaningless because you cannot make money from it. Obviously, if the 1st month is up, the odds are greater that the year will be up. This is because the bears now only have 11 months to take control. In addition, they now have to overcome one month that is already up (the bulls have a head start).

Furthermore, the difference between the most bullish month of the year and the average gain in any month is less that 1%. Since that size move can happen in any one day, the only difference between a bullish month and a bearish month is usually just a day or two. The other 20 days or so, on average, are therefore the same. Hence, knowing that December tends to be up and September tends to be down does not help a day trader.

If day traders cannot make money from these ideas, why publish them? Because they are part of the trading culture. They are secret hand shakes that all traders know. Furthermore, they often come up in conversation. Therefore is someone asks you about them and you have a blank face, you would be embarrassed. Finally, it is fun to think about the big picture and subtle underlying forces behind the market.