The Dow will break strongly above 20,000, even if it falls to 10,000 first! That is because the world creates more workers in an increasingly efficient world economy every day. As a result, the world’s wealth is steadily increasing. Since the stock market contains a big part of the world’s wealth, it, too, will steadily increase. Yet, there will always be shockingly big bear trends along the way. For example, the Dow lost 89% after it crashed in 1929, but is now 500 times above the crash low. 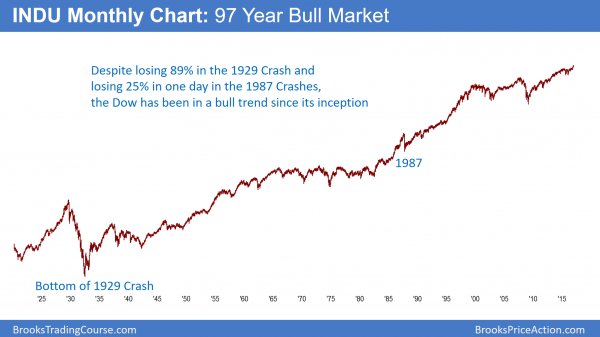 This is a monthly chart of the Dow Jones Industrial Average over the past 97 years. Despite losing 89% after 1929, it has been in a bull trend since its inception.

The world has 7 billion people. But, within a few hundred years, the population will begin to decline. I don’t know if the maximum number will be 15 or 50 billion people, but only so many can fit comfortably on the planet. A luxury car might comfortably fit 4 people, but no one would enjoy the luxury with 15 packed in.

As poverty decreases and education increases, family size decreases. In addition, there are many other demographic forces. In many countries in Europe, the birth rate is already too low to maintain the population. As a result, if not for immigration, these countries would be shrinking. Furthermore, if they shrank enough, their economies would shrink as well. The countries would have fewer dollars. At the extreme, if there was no one left, the countries would have no money.

Too many people will reduce everyone’s quality of life. The world will therefore have to make too many bad choices over food, water, energy, wild spaces, and every other resource. Hence, governments, including ours, will limit population.

If 500 years from now, the world’s population falls from 15 billion to 10 billion over the following 500 years, the loss in the world’s earnings will probably be greater than the increase in productivity. As a result, the bull market that has gone on for thousands of years will eventually turn into a bear market. In addition, it could last hundreds of years, instead of just 3, as it did after the 1929 Crash. That bear market will probably end up as part of a trading range or broad bull channel that could last forever.

At some point, the population will stabilize or enter a range. Once that happens, increases in productivity will increase the world’s wealth and the stock market again. Yet, without an increasing number of workers adding to the added wealth, the growth will never be as high as it has been. Neither you nor I will be around to know if I am right, but I believe I am.

Sometimes someone says, “Al, if trading is a zero sum game, then half of all firms lose money and go out of business.” While that statement is true, the “if” is a flawed premise. Over the course of a few months, the size of the world’s economy can stay the same or even shrink. During those times, trading is a zero sum game. Hence, every dollar made by one firm is lost by another. Yet, over the course of years, the stock market goes higher. That means that the total dollars increase.

The world’s wealth has relentless increased since the beginning of civilization. It is directly correlated to the number of people on the planet. The more people working, the more goods and services. As a result, the world’s wealth increases.

On the news, you always hear about GDP being 1 – 3% in the US. That is misleading. When the news says that the GDP is 1%, what they mean is that the growth in the Gross Domestic Product is 1%. During a recession, there is no growth. In fact, the economy shrinks, which means that the GDP is negative. Yet, there are far more up years than down. Therefore, the total wealth of the world steadily increases.

The pie is growing. Hence, it is not a zero sum game. The fight is not over a fixed number of dollars. It is over who is going to get the biggest share of the new dollars that constantly appear.

Because the bull market will continue for another several hundred years, we never have to worry about a zero sum game. As traders, we simply have to work on being the best that we can be, knowing that there is more than enough money for everyone.