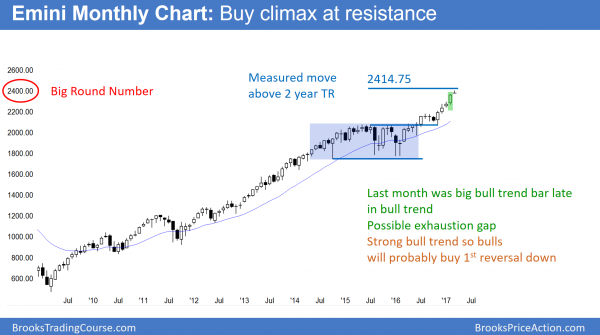 The monthly S&P500 Emini futures candlestick chart is in a strong bull trend, but it is climactic. The bulls need follow-through after last month’s strong rally. Yet, the absence of follow-through buying increases the risk of an exhaustion gap.

The monthly S&P500 Emini futures candlestick chart rallied strongly for 4 months. In addition, last month was an especially big bull trend bar. Furthermore, it reached several measured move targets based on the 2 year trading range. Finally, it is at the 2400 Big Round Number. Whenever a rally is especially strong and hits resistance, traders need to be aware that it could be a buy vacuum test of resistance. Hence, it could be an exhaustive end of the trend.

Since so many sites equate buy climaxes with trend reversals, many traders assume that they are the same. Yet, they are not. Most buy climaxes lead to trading ranges, not bear trends. The bulls are exhausted and take surprisingly big profits. After 10 bars or so, they decide if the bears did enough to reverse the trend.

Since this is a monthly chart, that 1st selloff could be 200 points, but still be small. While a pullback is likely soon, the odds are that the bears will need at least a micro double top before they can create a major reversal. Hence, a major top needs at least a couple more months. 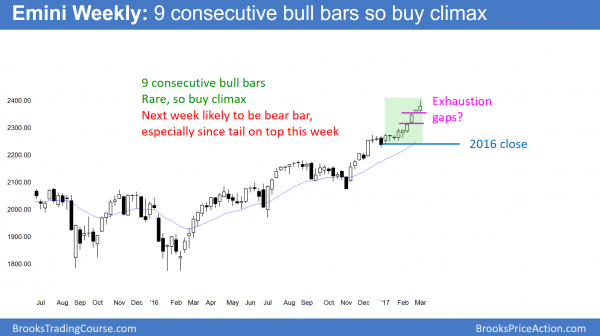 The weekly S&P500 Emini futures candlestick chart had its 9th consecutive bull trend bar this week. Since that is unusual, it is unsustainable and climactic.

The weekly S&P500 Emini futures candlestick chart had another bull trend bar this week. Yet, the bar had a big tail on top. Because 9 consecutive bull trend bars is very unusual, next week will probably be a bear trend bar. Hence, next Friday will probably close below Monday’s open. This is true even though March and April are, on average, the most bullish consecutive months of the year.

This week’s high was unusually far above the moving average. When the market is far above the average price, bulls stop buying. As a result, the market usually enters a trading range. Hence, the weekly chart will probably be sideways for the next month or two. The bottom of the range could be as low as last year’s close.

Can the market go much higher without first going sideways for at least a couple of weeks? I have been trading for 30 years. I rarely get to say, “I haven’t seen that before!” That is what I would say. It is not likely. 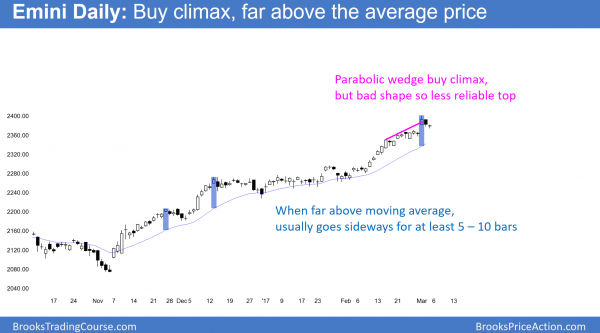 The daily S&P500 Emini futures candlestick chart had 3 pushes up in a tight channel over the past 3 weeks. Thursday’s reversal down made this a parabolic wedge top.

The daily S&P500 Emini futures candlestick chart has rallied strongly since the bull breakout in early February. Yet, it has had 3 pushes up, with the 1st push being the February 15 top of the breakout. While this is a parabolic wedge top, and Friday triggered the short, the bears need many more bars to reverse the trend. Furthermore, the shape of the wedge is not clear. Therefore many computers will not see it as a wedge top.

Failure to create an island top

Yet, if they get a big gap down any day next week, it would create an island top. Hence, traders would again wonder if this was the start of the pullback to the December close.

When a parabolic wedge top reverses, it usually pulls back into a tight trading range for 10 or more bars. Furthermore, that range is usually sloped down somehwat. At that point, there is a 50% chance of trend resumption up and a 50% chance of a bear breakout. The bears usually need at least 2 big bear bars closing on their lows. Therefore, traders will watch for that if a tight trading range begins next week. If the bears get their 2 big bear bars, the odds are that the Emini will have a swing down on the daily chart.

The Emini never traded below last year’s close. Hence, it has been up all year. Because this is unusual, there is a 70% chance that the Emini will trade back below the December close at some point this year. Furthermore, there is a 60% chance that it will achieve the goal within the next couple of months.

Is this buy climax the top?

Bull trends are always reversing. But, my 80% rule says that 80% of reversal attempts fail. Therefore, as good as the current reversal is so far, it still will probably fail. However, Thursday’s big bear trend bar after Wednesday’s unusually big buy climax bar is important. This is especially true because the reversal was at the 2400 Big Round Number and several measured move targets. Hence, even of this week is not the final top before the 5% correction, the current rally will probably end within the next few weeks.

Reversal will probably be minor

If the bears get a deep correction, it will break below the tight bull channel that began in November. Hence, the bulls who bought at the high will be eager to exit on a rally back to where they bought. They will be disappointed by a deep pullback. They will therefore conclude that the Emini is no longer in a strong bull trend. Hence, they do not want to be long at the high.

It will probably take at least a couple of months for a selloff and then a test of the high. Therefore, any major reversal down is probably at least several months away. Hence, even though a 160 point selloff to the December close is a big move, it will probably not be the end of the bull trend.