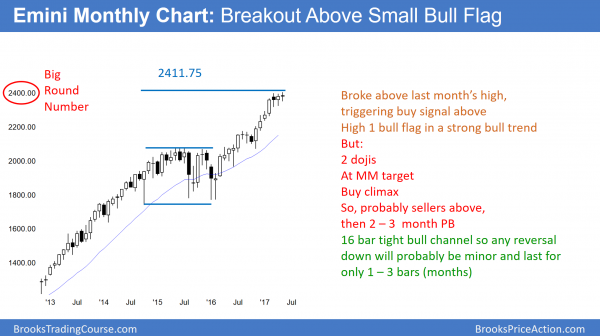 The monthly S&P500 Emini futures candlestick chart has a doji bar so far this month. Last month was a High 1 buy signal bar, and May triggered the buy by going above the April high.

The monthly S&P500 Emini futures candlestick chart is in a strong bull trend. In addition, the rally from November was exceptionally strong. Yet, when a bull trend becomes extremely strong late in the trend, that strength is more likely to lead to exhaustion than a new swing up.

Furthermore, the 2014 – 2015 bull flag has a measured move up to around 2400. Hence, the monthly chart is at that resistance. When there is a High 1 bull flag after a buy climax and at resistance, the upside is usually small.

Typically, the bull breakout lasts for 1 or 2 bars, and then the Emini pulls back for at least a few bars. Hence, the May breakout above the April high might be the end of the rally. In addition, traders will look for a 3 month pullback after this May breakout, or after 1 more month up.

Since there is a measured move target on the cash index, based on that 2 year range, that is around 2500, the Emini might rally further before pulling back. Yet, the weekly chart is so overbought that a pullback over the next couple of months is more likely. 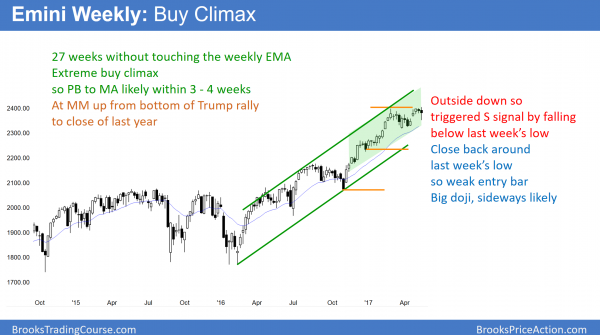 The weekly S&P500 Emini futures candlestick chart has not touched the 20 week EMA for 27 weeks. This is a strong bull trend, but climactic. By trading below last week’s low, the bears triggered a sell signal for the failed breakout above the March high. Yet, this week closed far above its low. It is therefore a weak entry bar.

The weekly S&P500 Emini futures candlestick chart has been in a bull trend for 8 years. If the low of next week stays above the weekly moving average, it will be the 28th consecutive week completely above the average. That has not happened in the 8 year bull trend. The only time it happened in the 18 year history of the Emini was in 2003. But, even then, the weekly chart pulled back very close to its average at 17 and again 25 weeks. Consequently, this current stretch is the most extreme example in the history of the Emini.

It probably will fall below the average to the around the March low at the bottom of the 2 month trading range. That is around 2300, and the pullback would therefore be about 100 points.

If the Emini falls to the bottom of the March trading range, it will probably bounce. Bears will sell a reversal down from a lower high. That would create a head and shoulders top. Topping patterns are usually in trading ranges. Since most trading range breakouts fail, most good looking reversals fail to lead to opposite trends. Many traders still take the short because the reward is much bigger than the risk. Hence, the great risk/reward offsets the 40% probability of a swing down.

Some traders prefer higher probability. They therefore wait for a strong bear breakout and then sell. While the stop is further away, creating more risk, the high probability offsets the reduced risk/reward.

This week traded above the high of the prior week and then below its low. Hence, this week was an outside down week. Because its range was big and it closed in its middle third, next week will probably stay within this week’s range. It would therefore be an inside week. This would therefore create an ioi Breakout Mode pattern.

If next week is a bull bar, traders will be more willing to buy above its high, despite the buy climax. Furthermore, if the following week trades below that bull bar, there will probably be more buyers than sellers below. 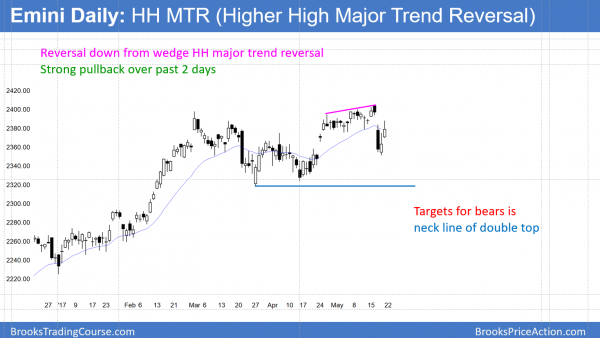 The daily S&P500 Emini futures candlestick chart sold off strongly on Wednesday, but reversed up strongly on Thursday and Friday.

The daily S&P500 Emini futures candlestick chart reversed down from a wedge higher high major trend reversal this week. Yet, the bulls bought the selloff. The bears created a gap down on Wednesday, resulting in both a 2 day and month-long island top.

Friday’s strong reversal up could lead to a gap up on Monday. If so, that would create a 3 day island bottom. Since the Emini has been in a trading range for 2 months, island tops and bottoms are not strong predictors of the future direction. Yet, they still are a sign of strength. Traders need follow-through before they believe that the gap is the start of a trend. Without it, the trading range is likely to continue.

This week’s Big Down, Big Up created Big Confusion. Therefore, the Emini will probably go sideways next week.

This week’s reversal up is similar to that of September 12, 2016. That rally retraced almost to the top of the selloff. Yet, the Emini reversed down from a lower high, and traded sideways to down for the next 2 months.

While there is a 30% chance of a relentless rally to 2500, the weekly buy climax will probably control the market. Since a pullback to the weekly moving average is likely over the next few weeks, this rally on the daily chart will probably fail. This is true even if it makes a new high. Rallies therefore offer good opportunities for traders to buy puts or put spreads.

The selloff of September 2016 was mostly sideways. If the current selloff is similar, it will be difficult for put buyers to make much money if they buy and hold. When a market is in a tight trading range, even if it is sloped down, expert traders make more money by buying low, selling high, using limited entry orders, and scalping.