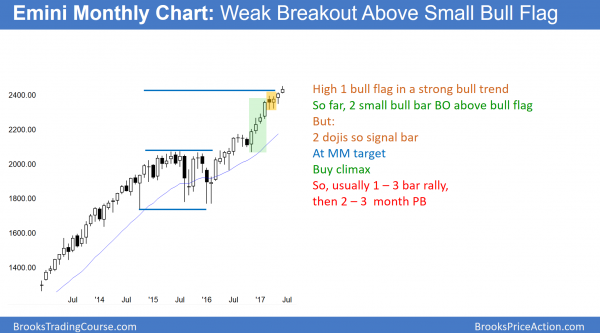 The monthly S&P500 Emini futures candlestick chart has been in a strong bull trend for 18 months. It is at a measured move up from the 2014 – 2015 trading range, which will probably be the final bull flag in the 8 year bull trend.

While there is no sign of a top, this is an unusually strong rally. When something is unusual, it is climactic. Hence, it is likely to pause soon.

Therefore, the Emini is likely to begin to pull back either this month or next. Since the 18 month rally is in a tight bull channel, it is very strong. Consequently, the bulls will be eager to buy a pullback. Hence, the pullback will probably only last a few months. However, a 3 month pullback on the monthly chart could be 100 – 150 points. While it would create a bull flag on the monthly chart, it would be a bear trend on the daily chart. 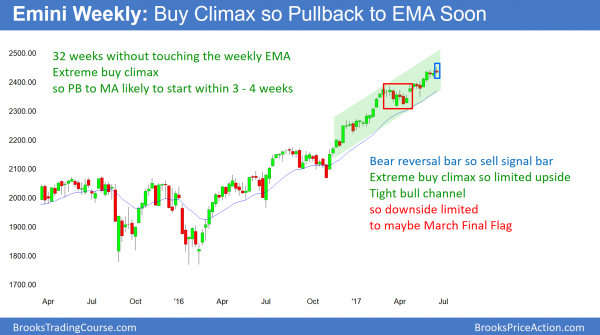 The weekly chart is in a strong bull trend and has not touched its 20 week exponential moving average in 32 weeks. Because this week closed below its midpoint, it is a reversal bar. Since it has a bear body, it is a bear reversal bar. It is therefore a sell signal bar for next week. The rally from the March low is a parabolic wedge, which is a type of buy climax. Furthermore, the March – April trading range is probably the final bull flag.

The weekly S&P500 Emini futures candlestick chart is in a strong bull trend. In fact, this is the strongest bull trend in the 18 year history of the Emini. When a market becomes especially strong after 20 or more bars in the trend, that strength usually is exhaustive. Consequently, it usually leads to a pullback and trading range. That is likely here.

The weekly S&P500 Emini futures candlestick chart has not come close to its 20 week exponential moving average in 32 weeks. This has happened only once in the 900 bars that the Emini has been in existence. Yet, when it stayed above for 50 weeks in 2003, it got very close to the average price twice. Those pullbacks therefore partially relieved the overbought condition, allowing the rally to extend.

Since the current rally has not come close to the moving average, there has been no relief. Consequently, this is the most extremely overbought weekly chart in 18 years, at least by this measure. However, it is a very important measure. Therefore the odds are that the Emini will begin to pull back to the moving average within weeks. 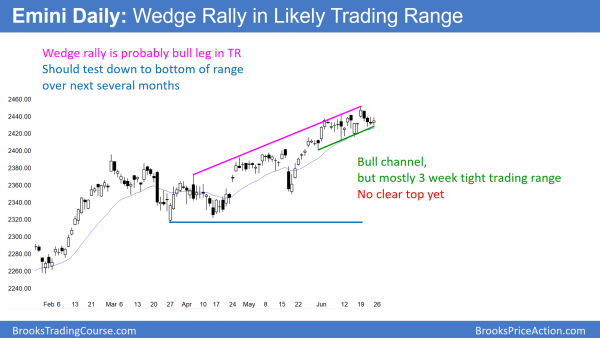 The daily S&P500 Emini futures candlestick chart pulled back from a breakout above its 3 week tight trading range. Because it has been forming higher highs and lows for 3 weeks, it is also in a bull channel. Since Friday was a bull bar, it is a buy signal bar for Monday. Because it followed 3 bear bars, the Emini might go sideways for a few bars before trying for a new high.

The Emini has been in a strong bull trend since the November low. There is no sign of a top. Therefore this rally can continue indefinitely. In fact, there is a 25% chance that the bulls will get a strong bull breakout above the bull channel that began in November.

However, there is a 75% chance that a bull channel will have a bear breakout. The breakout can come from the Emini simply going sideways. Channels usually evolve into trading ranges, and that is likely here. The Emini is now probing up to find the top of the range. There is no sign that the top is in yet.

Bull channel is a bear flag

The daily S&P500 Emini futures candlestick chart has rallied in a bull channel from the March 27 low. Since that rally has 3 legs up, it is a wedge bull channel. It therefore will probably have a bear breakout.

Bull channels usually evolve into trading ranges. The 3 month rally is therefore probably a bull leg in what will become a trading range. A trading range has bear legs after bull legs. Therefore, the Emini will probably soon begin to swing down for a couple of months. The selloff typically tests the beginning of the wedge channel, which is the March 27 low.

Because the Emini was in a trading range in March and early April, and that trading range was late in the rally that began in November, it is a possible final bull flag. Hence, it is a magnet. That is therefore an additional reason for the Emini to pull back for 100 or more points over the next few months.