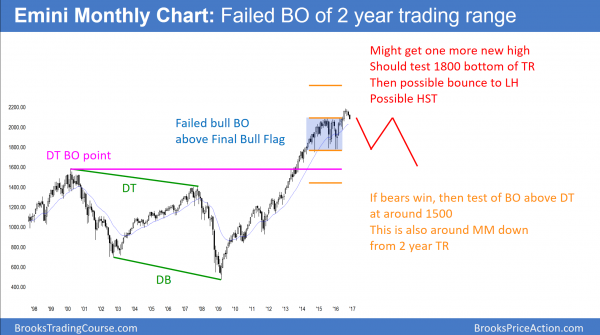 The monthly S&P500 Emini futures candlestick chart finally pulled back below the July 2015 high. The July 2016 breakout is therefore an exhaustion gap.

The monthly S&P500 Emini futures candlestick chart has pulled back for 3 months. I have been writing since the July breakout that the breakout was probably an exhaustion move. When a strong breakout occurs after 20 bars in a trend, it is more likely an exhaustion gap than a measuring gap. The July breakout came after 100 bars in a bull trend. By this week trading below the July 2015 top of the 2 year trading range, the bears closed that gap. Hence, the July 2016 bull breakout is now an exhaustion gap. This therefore meets one of the objectives that I have discussed since July.

Furthermore, there were 7 consecutive bull trend bars on the monthly chart in August. In the 18 years of the Emini, there have never been 8. In addition, every time there has been 7, the Emini corrected about 100 points. This is also a 5% pullback. The Emini met that objective as well this week.

Because there are other targets below on the daily chart, this pullback will probably fall further. Yet, the 3 bar pullback is still more likely a bull flag on the monthly chart than the start of a bear trend. However, because the 2 year trading range is probably the final bull flag before a 1 – 3 year correction, there will probably be sellers above the old high.

Because of the Final Flag top on the monthly chart, traders will sell any new high. The odds are that the Emini will trade down to the bottom of the Final Bull Flag, even if there is one more new high. Hence, the selloff should reach 1800 within a year or two.

Since the bottom of the 2 year trading range is support and the monthly chart is in a bull trend, bulls will buy there. As a result, there probably will be a rally. That rally will then probably fail around the old high.

The monthly chart has been in a bull trend for 7 years. Because that is unusual, it is unsustainable and therefore climactic. Hence, the Emini will probably sell off for at least TBTL Ten Bars, Two Legs.

Ten monthly bars is about a year, but it could be longer. Especially relevant is the double top around 1500. The gap between the current price and those tops probably will close. A correction is often about half as long as the bull trend. Since the bull trend lasted 7 years, the move down might take 3 years. Because Emini corrections are often climactic, the test of 1500 will probably come in less than 3 years. 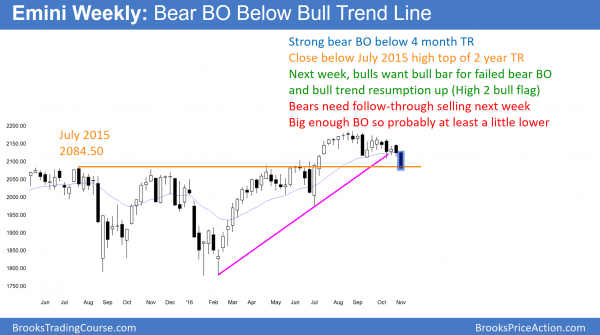 This week, the weekly S&P500 Emini futures candlestick chart had a big bear trend bar. This is a strong breakout below the 4 month trading range. Yet, the bears need follow-through selling next week if this selloff will lead to a reversal.

The weekly S&P500 Emini futures candlestick chart this week had a big bear bar that closed below the past 16 bars. The bears want a measuring gap. Hence, they need a bear bar again next week as well. If next week is a big bear bar closing on its low, the bears might be able to test the July 1975.00 bottom of the buy climax. That would be below last year’s close. It would therefore turn the Emini negative on the year.

The bulls want next week to have a bull body. They would then see it as a buy signal bar for a failed bear breakout. It would also be a big High 2 bull flag with the September 16 low. In addition, it would be around a 50% pullback of the July rally. This would turn last week’s bear breakout into an exhaustion gap.

Most likely, next week will not be a strong bear trend bar nor a strong bull reversal bar. While the odds are there will be some follow-through selling, this is more likely a Big Up (July), Big Down, Big Confusion pattern. Therefore, the weekly chart will probably go sideways within a week or two. Furthermore, next week will probably disappoint the bulls and bears. Therefore, the Emini might go sideways for 2 – 3 weeks. 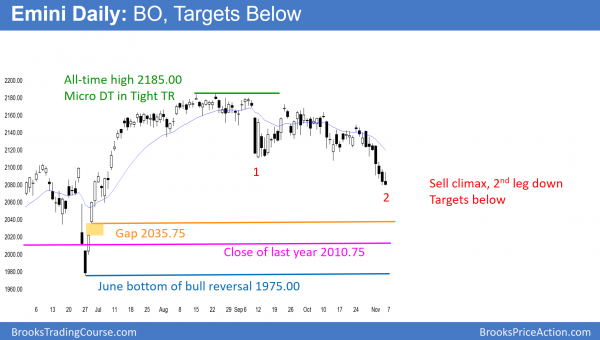 The daily S&P500 Emini futures candlestick chart had 7 consecutive bear bars in its break below the 4 month trading range. This is unsustainable and therefore a sell climax. Yet, there is still no bottom.

I have written many times about the August double top in the tight trading range. I posted an example of that type of pattern in my October 5 weekly blog. The title of that blog was, “October 5% correction before presidential election.” While the 5% correction came before the election, it also came 3 days after October.

That article has a 5 minute chart with a double top in a tight trading range. This is comparable to the tight trading range double top in August on the daily chart. I said that this pattern often has 2 legs down. Especially relevant is that the 2nd leg is often a sell climax. In addition, bulls usually buy the sell climax and there is then usually a strong reversal up.

The daily chart is currently in a sell climax. The odds are that there will be a sharp reversal up. Yet, the channel down has been tight. Therefore, there will probably be at least a little more down before the buyers come in. If there is a climactic reversal up, it will probably come within a week or so. Hence, it might come just after the election. A reversal up does not mean a new high, yet it might last until the end of the year.

Furthermore, I have talked many times about the pullback probably falling to 2040 – 2060. The July 6 low was the 1st pullback after the June bottom. It is therefore a magnet for the bears who held and scaled in during the past 4 months. They will take profits there. In addition, there is a big gap below the June 29 low of 2035.75. Lastly, the Emini might test all of the way down below last year’s close to the June bull trend low. Yet, that is unlikely. However, if the bears hold the market there, the stock market would have a down year.