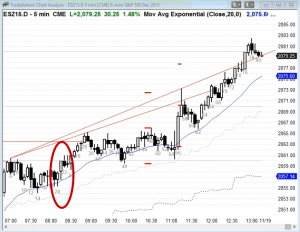 [Bars] 20 to 22? Yeah, it’s possible. At that point in the day — at that point in the day, right here, we’re at the top of yesterday’s range. We obviously have a trading range. We’re probably in breakout mode. We’re probably going to double the range either by going up or by going down. We have room to the 60-minute moving average and to yesterday’s close so we can easily go down. And I thought it was a reasonable short. But with 20, 21 closing on their highest, I thought more likely the best the bears would get would be sideways.

So for second leg traps, usually they’re big. That’s not very big. And usually, they look especially bullish. They really look like they’re going to be a breakout and they’re going to lead to something really big. Or in the case of a bear, here’s a possible second leg trap here — very bearish, right? Then we had this really good example over here, rally — very strong rally. We were still below the top of the bear leg, the day’s high, and then up here. And we have gap bars 50 bars into a trend, so the bulls need to do more to convince me that it’s going to be a bull trend. And when that’s the case — and that’s the kind of environment when I think about a possible second leg trap — when the bulls need to do more. As strong as the bulls look, they need to do more; they need to get above the top of this bear leg. They need to get above this, otherwise it could be simply a second leg trap in either a trading range or a broad bear channel. In this case, it turned out to be a second leg trap in a broad bear channel.

So then, how do you distinguish it from a breakout? Context. If the context is really good for a breakout, I trade it as a breakout. This could have been a second leg trap. I mentioned that at the time. Very climactic bar, so a possible high climax instead of a measuring gap. And then 62 turned back up at the 55 high. And 63, 62 — you can see 63 — as soon as 62 closed, they bought it. You can see the gap between the open of the 63 and the high of 62. So to me, it looked like the market was going up, at least some.

So I’ll talk a lot more — or I have talked in the new videos, I talk a lot more about second leg traps in channels, and trading ranges, and I try to make it clear. But the main thing is, if it’s reasonable to think the market’s still in a trading range or a channel, I’m much more willing to believe the big breakout is going to be a trap. If, on the other hand, it’s clearly above all resistance — if we’re talking about a bull breakout — then I’m much more likely to believe that a big move up is going to be a measuring gap rather than an exhaustion gap.