I trade breakout pullbacks. I always need three or four-point stops to make one to two points. Is that acceptable? 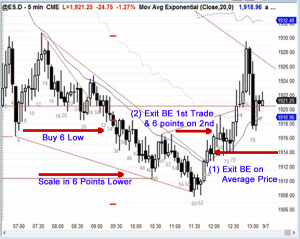 I do that all the time. So can you use a four-point stop to make a one-point scalp? On most days, if the days’ range is 40 points, you’re not going to do it. But if the range is 10 points, sometimes 20 points, and we’re in a fairly quiet trading range part of a 20-point day, sometimes I will risk four points to make one point but only if I’m willing to scale in. So for example, let’s say I placed a limit order to buy the 6 low, I’m probably not going to get my one-point profit right away; I’m probably going to buy more one point lower and probably going to use a five or six-point stop.

What do you know about probability? When you ask that question, you know something. You’re saying, “Can I make a one-point scalp using a four-point stop?” Immediately, what are you saying? There are always three variables and you just gave two of them. You said big risk, small reward. So you automatically know probability. Anytime you have small reward, big risk, you have a bad risk reward ratio where your risk is much bigger than your reward. That’s a terrible risk/reward ratio. If you have a terrible risk/reward ratio, you know that the probability has to be high, right, because the guy on the other side cannot have everything going his way. So anytime you’re using a wide stop, your probability’s going to be high, but your wide stop means that you’re risking a lot so if you use a wide enough stop, you can pretty much buy any day and make money, and you can pretty much sell any day and make money. If you use a 100-point stop, and you buy at any point and then scale in 20, 30, or 40 points lower, you’re almost certainly going to make money. You’re going to make money probably 80 percent of the time, but occasionally — maybe 10 or 20 percent of the time — you’re going to lose 100 points, but the math is okay.

Experience and comfort needed for scaling in

But back to your question, “Is it okay to risk four points to make one point?” Only if you’re not going to scale in, if you have to be right 90 percent of the time or else it’s a losing strategy, and really good traders I know — I’ve traded with a bunch of traders who win 90 percent of the time, scalpers who win 90 percent of the time so it can be done. But if you’re starting out, that is not what you should be doing because you are not going to be winning 90 percent of the time. And also, you should not be scaling in. However, if you start getting some experience and some comfort and you can trade small enough so that you’re perfectly comfortable scaling in, then you can do that. But you got to make sure that you’re reading the market cycle correctly. You don’t want to be buying in a really tight channel bear trend because if you look at the 15-minute chart and you say, “Wait a minute, on the five-minute chart it’s a bear channel, but on the 15-minute chart it’s a bear breakout. Every bar is closing on its low.” So you have to make sure that you’re assessing the market correctly — which is easier, in hindsight, but that’s really key if you’re going to be taking a small profit/big risk trades, and especially if you’re scaling in. You have to really know what you’re doing and you have to be really comfortable with what you’re doing.

A lot of times, maybe I can find you an example of something here. I’m looking for one specific thing that happens fairly often, and because I’m saying it happens fairly often it’s going to be hard to find. What I’m looking for is a reasonable buy. This is really — this is kind of an example of it, but it’s not a very good example of it. But let’s say 36 is a great-looking buy; bulls will buy the high, they’ll use a very wide stop, and they’re willing to scale in. They don’t make a profit and immediately break strongly to the downside. They’ll buy more on the reversal up. And if this is a reasonable buy and the context is good and the signal bar is decent, buying that reversal up and getting out breakeven is a logical strategy. Even if you have a breakout like this — a five bar bear breakout. So to me, if I’m trading a fund and 36 looked like a pretty good buy, I would either buy 36 and then buy the reversal up above 44 or 45, or not buy 36 and then when I get down here I’m thinking the scale-in bulls will buy and we’ll get back to that high so I’ll buy the reversal up. So that’s the kind of thing that I’m talking about.

If you have enough experience and you’re pretty confident, and you read of what the market cycle is doing, what the price action is doing, then you can do that, but if you get very stressed out and very upset, and very worried as you get four of five bar breakout against you, obviously you should not be doing that; not only because you’ll mess up and not make money, more importantly, you got to like your job, right, and if you’re stressing out and feeling really miserable, and unhappy, and tense, that’s not fun. You don’t want to do that.