Question 1: Al, if you buy a breakout, how do you determine when to get out breakeven and when to hold through the pullback?
Video duration: 6min 02sec 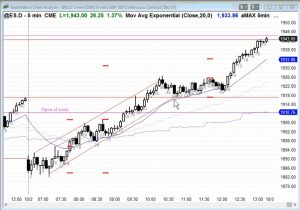 For me, it depends on what your goal is.  This comes down to scalp versus swing.  If I’m buying a breakout and I’m doing it for a scalp, I don’t want the market to come back.  I’m pretty quick to get out.  If I think that a pullback is acceptable, a lot of times I’ll scale in during a pullback.  But if I’m looking at a pullback and I’m saying, “Wait a minute, it should not be doing that,” then I get out.

Sometimes you’ll get a reversal signal before the market falls below a low.  So let’s say you’re long up here [B44/45], your stop is down here [below B38]. But let’s say you decided to short below 57 or below 64, taking a chance for a Major Trend Reversal, that’s okay.  So, you can get out even though it’s still Always In Long.  But the Always In Long bulls strictly speaking, until they see a strong reversal down, they stay long as long as it’s staying above the bottom of their last leg up.

Question 2: When there’s a breakout like 61. While it is happening, how do differentiate from 28 or 38, to enter with market orders? How do you know how large the bar will be? 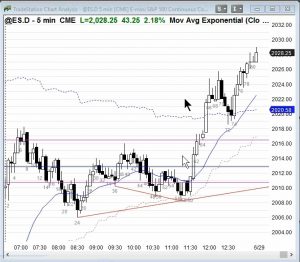 Okay, so he’s saying when you get a breakout like 61 right here and he’s comparing it to 28 or 38, 38 or 28. Now first of all, context is a little bit different. Here we get a wedge bull flag, we’re getting late in the day, 11:30. For trend resumption or trend reversal. And then also as 61 was forming, I tried, it was going up very quickly—I placed a limit order to buy a two tick pull back. And instead of pulling back, I went up like three or four ticks and I was thinking to myself, “Oh, that’s bad. That’s bad. I’m going to get trapped out.” So I just hit ‘Buy the Market’ and I keep my fingers crossed.

It’s like when you are a kid, you’re jumping off a high board for the first time. You stand up there and you hesitate and then you say, “I’m just going to do it.” So you bring your arms in tight and your knees up to your chest. Your cheeks are puffed up, you pinched your nose, your eyes are squeezed really hard, and you just jump and hope for the best. So when things are doing that, when they’re going up really quickly, you just don’t know. You have to decide quickly.

I knew that I wanted to buy and I usually try to buy with a limit order. And I probably did buy on a limit order on 28 or 27 or 37. Because that’s what I typically do. But here [36/49/57], I thought that we had a wedge and a micro double bottom like we’d go to the bottom and that we had the potential to get up to the 60-minute moving average for the high of the day so I thought there was a potential for a breakout.

Look for trend resumption or reversal

And it’s really easy to get lulled into indifference when you’re in a sideways market for 2 hours like that. But around 11, 11:30, 12, I always start to pay a lot more attention. And I look for trend resumption or trend reversal. So, for me, you’re saying how do I know 28 and 38 are not going to be strongly bullish. Well, first of all, 28 — tight bear channel – it’s probably a minor reversal. And 38, right now, it’s a second leg up in a trading range day, and it’s just not all that big so I’m not too certain about that.

Here, we’ve got a wedge higher low and a very big bull-bar, the biggest bull-bar of the day, and we’re breaking out of what I think is a wedge bull flag or a triangle. And I tried to buy and could not buy the way I typically buy. So it’s probably something atypical about what’s going on. The character of the market might change.

Question 3. You mentioned that you missed the buy on the close of 61. What told you that it was a breakout while still in a sideways trading range? 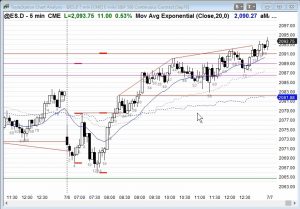 Well, two things. You’ve got this big-bull reversal bar, you always hear me talk about those bars being limit order bars with sellers above. Those sellers are scalpers. If the context is good, here we’re in a bull trend, at the moving average, I think most of the time you make a profit buying above 58. But you need a wide stop. And the alternative is instead of buying above 58, you place a limit order to buy a 50% pull back. And then 61, now we have a second entry buy setup, with closing on its high at the moving average. To me, that’s even a higher probability buy than buying above 58.

The right thing to do

And [second thing] I talk, sometimes have stuff I have to do on the phone, doctor’s appointments, and contractors, who knows what. And my mother sometimes calls. She’s always amusing to me.

What happens is, she’ll call and she’d say “Al. Did you call?” And I know what she’s saying – she’s saying that she’s lonely. And she may be faking it. I don’t know, maybe half the time she says that nobody called, and she just wants to talk to me. So I say “Oh? No Ma, but I can talk.” So whenever she calls, I always take the call. I always speak with her a couple of times a week. And that results in me — it costs me money. But it’s still the right thing to do so I do it.