Question: I shorted the 7 high on bar 10, betting that the rally would end up as a wedge top. I shorted more around the 12 high, Ok, and I was stopped out at near the top of 13. Can you explain how you would have managed my trade better if you were in the position?
Video duration: 2min 41sec 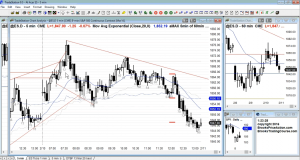 So he sold above 7 betting on a wedge 1, 7, and maybe 12 or 13, and here’s the problem with selling the 12 high.  I don’t know if you can see it.  I’ll go back here, maybe it will be more obvious.  It’s the same thing with buying anywhere down here — there’s a gap — 72 high, 65 low.  Here, there’s a gap, 12 low and 7 high.  I mentioned that as it started to turn up. Then I said it might result in a measured move up.  So if I sold above 7, I am not going to sell more above 12 because at that point we would have had a potential measuring gap here.  And why sell at the 12 high when I’m probably going to be able to sell higher.

I don’t know if the measuring gap is going to be from the 1 low or from the 3 low, but I think there’s going to be some kind of a measured move up based upon this gap 12 low and 7 low.  So in a situation like that, if I sell the 7 high on bar 10 and — who knows, I sell more — let’s say I sell the 11 close, which I would not, but let’s say I did.  As soon as the market tested down 12 and started to turn up, I’m going to buy back my shorts above 12.  And guess what?  That’s why 13 looks like that because as soon as traders saw that gap below 12 and above 7, they decided it was going higher, so everybody bought back their shorts on 13, and that’s why 13 is a big bull bar.

When 13 formed — when 13 closed, I talked about the possibility of an exhaustion gap compared to a measuring gap.  So if anything, I would be thinking about shorting around 13 or below 14, or over the next several bars if we start to trade down.  But to me, everyone got out on 13 and that’s the place to get out, so I would not be selling more at the 12 high because we have a gap and it’s probably going to result in a measured move.

A lot of that stuff, you have so little time to decide.  13 went up very, very quickly.  But if you were aware of what 12 was doing, possibly creating a measuring gap with 7, you would be much better prepared to get out quickly by 12.  And if you’re flat, you can quickly buy above 12, expecting the market to go up for some kind of a measured move.