Question 1: I did not sell once between 48 and 58 since I constantly was thinking near support, trading range bottom on the left. Any advice on this?
Video duration: 7min 33sec

Big up, big down 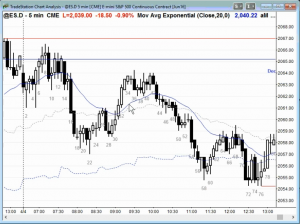 So he did not sell between 43 and 58. That doesn’t bother me. You’ve got a pretty good reversal. Down big, up big. I mentioned at the time, it was also a bear channel, lower high, lower high, and that we could be channeling down and that bears would be selling, especially below the second entry short 42.

But I don’t have a problem with not selling down here. You’ve got a higher low. It’s a bear channel, yes, so you can sell for a swing, stop above that and take a chance. But probably not going to go down all that far. It was a very tight bear channel, but you have to be able to use the correct stop. So if you sold anywhere through here, your stop is up here. And if you sell up here, maybe your stop is here; it’s probably better up here. I think it’s hard to structure a very strong trader’s equation. The probability is not all that good. Risk is relatively big, reward is relatively small. So I would not worry about that. Selling 54, possible exhaustive sell climax. 55, same thing. Possible measuring gap. I think if you’re quick to make decisions and manage trades, you could sell 54 close, 55 close. But I did not think it was going to fall all that much.

Logical not to sell

As far as advice on how to handle all this stuff, not selling this? I think it’s perfectly logical not to sell that. It’s not all that bearish. We’re still above a higher low. Yes, it’s a bear channel, but you’re selling low in the channel. If you want, you can say, “Okay, it’s a 10 bar bear micro channel. Maybe I’ll sell above a bar and put a stop above here or a stop above there,” if it’s really a small pullback bear trend. Pullbacks should only last one, two, or three bars, and they should not get above here. So theoretically you could trade small, put a stop up there, and take a chance that it becomes a small pullback bear trend.

But I don’t have any special advice about that. It’s really tough to structure a strong trader’s equation trade when the market looks like that. You’re selling low in a day that’s not all that bearish, or you’re buying and you’re in a very tight bear channel. That’s not very good either. It’s a scalper’s market, and you’ve got to be quick to make decisions. In general, I think traders will make more money if they stick to swings. I think that was a difficult swing to trade.

Question 2: I only see measured moves after the gap is established. What is the best entry strategy based on that, or is it too late in the move? 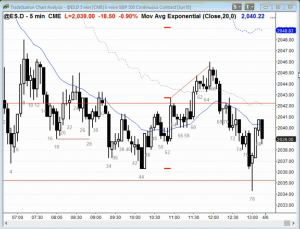 In general, if I think a day is a trading range day – like today, from the first bar of the day I thought it was a trading range day; I said it probably a hundred times today – in general, if it’s a trading range day, I’m going to be entering mostly with limit orders and mostly scalping for 1 point, sometimes 2 points. When there is a breakout that looks reasonably strong, 34 for the bears, 53 for the bulls, if I can get 2 points out of it, I usually exit at 2 points and then wait to see if it becomes a strong trend. If it becomes a strong trend, then I’ll swing part. But until it does become a strong trend, I’m going to assume that every big breakout, up and down, is going to fail.

Immediately get in on spikes

On a lot of those trades, I’ve already gotten in and gotten out. Some of these I buy with limit orders here, and I’m getting out on the rally, or I’ll buy with limit orders when it’s starting to slow down here, and I’m getting out on the breakout. A lot of times I’m doing the opposite. I’m selling bull breakouts and buying bear breakouts, if I enter early enough with limit orders. That kind of trading, I think, it takes years. You have to do thousands of trades to get to the point when you can start reversing and scalping, quickly in, quickly out, and pocketing as many little 1 points as you can during the day.

It’s better if you can use a wide stop, 4 or 5 points and scale in, and then quickly make decisions. There were several times today when I entered – let’s say I bought, and I bought more 1 point lower or 2 points lower, and I decided it’s just not all that good, and I placed a limit order to get out at the average price of my trade, maybe with a 1 tick profit. So I did that two or three times today when I entered, scaled in, and I thought the reversal was just too strong, and I just tried to get out breakeven on the trade. On most of those, I entered again a bar or two later, in the same direction or in the opposite direction. I just keep going all day long.