Al, can you talk about any interesting similarities between your approach and the approach of other traders you’ve traded with over the years?
Audio duration: 2min 53secs
Scroll down for chart 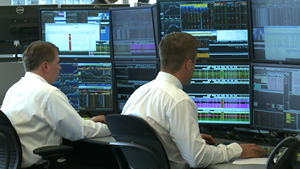 I don’t know. I think I gravitated toward traders who trade based upon price action. And about 10 or 15 years ago — I don’t remember how long ago it was — maybe 15 years ago — I was trading online with several different groups at different times. And one guy in particular, I traded with him online for several years every day, just repeatedly talked about the day, about what we were doing.

A reliance on indicators

And all the guys I ended up trading with, traded very similar to what I do except all of them also used Indicators. They had different stochastics. They all had something customized, something that’s not like a built-in indicator and in TradeStation, or in any other software product.

I studied that a lot — I wrote a lot of my own indicators, and I came to the conclusion that I spent too much time looking at indicators, which are based upon price, and it distracted me from price. And indicators are misleading. Whenever a trend is strong, an indicator — let’s say a bull trend — the indicator is always looking like a top and there’s always a divergence, and I don’t want to be looking at a divergence whenever there’s a strong bull trend. All I want to be doing is buying closes, buying below bars. I only want to be buying – I don’t want to be selling. 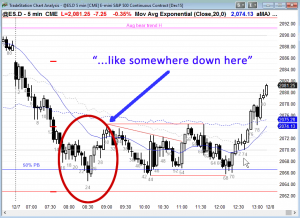 But beyond that, for the most part what they were doing is they were looking for price action entries, and for the most part they would be much more inclined to take a price action entry if there was also a divergence on some kind of an oscillator. Some of the guys scalped a lot. A guy I traded with for years, he’d take 20 or 30 trades a day for one or two points. He was a big time scalper. Other guys traded dialed down to one-minute charts or 1,000-tick charts for entries in an area where they wanted to enter, and then they ended up swinging. So if they see the market in a buy location like somewhere down here [see chart], put up a one-minute chart, or a 1,000-tick chart or a 5,000-tick chart, or a 5,000-share chart and look to buy on the stop on the reversal up.

Other guys use bands: Keltner bands, Bollinger Bands. So if they think the market’s a buy somewhere down here, they would put up a small timeframe chart, look for the upside breakout, and then they’d buy a test at the bottom of the band. And that’s all fine, but whenever I have other stuff on the chart, I look at the other stuff and I don’t focus on the price action. And there’s so much good in the price action that I don’t want to miss it, and I see 50, 60, 70 trades a day just looking at a five-minute bar chart or five-minute candle chart. I don’t need to add indicators to find trades or to confirm what I’m doing.