Question: What’s the significance of outside bars like 5, 7, and 29?
Video duration: 2min 54sec 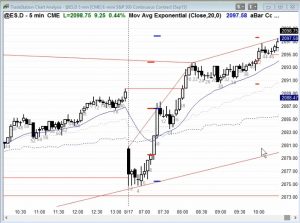 Outside bars — I talk about them in the books and the video.  They only have meaning if the context is good.  If the bar before is a logical buy signal bar, then the outside bar is an entry bar.  If an outside bar occurs in a tight trading range–bar 29–they are meaningless.  What’s important with bar 29?  You have a big bear bar closing on its low in a very strong bull trend. Traders will buy that close — whether or not it’s outside down. Bar 14 and 29, it’s identical, even though 29 is an outside bar; it did not go above 28, but it’s basically an outside bar.  It’s a type of outside bar, okay?  To me, 29 and 14 are identical even though 14 was not an outside bar.  What they are is a big bear bar closing near its low in a very strong bull trend.  It’s an attempt at a bear reversal.  Traders will buy that close.

So to me, 29 is not important as an outside bar.  It’s important as a bear bar, an attempt at a reversal, and a chance it will probably fail.  Then bar 5 I felt was not particularly important because 4 was not a good buy signal bar.  If 4 closed on its high, then 5 outside up would be important.  And if 5 closed on its high, it would be important, like bar 7, outside up — to me, you got a failed low 2, you have an expanding triangle, you have a second entry.  The single most important thing that took place here, the second entry buy below yesterday’s low, or breakout below yesterday’s low — tried to reverse up 2, failed, tried to reverse up 4 — better than a 50/50 chance we’re going higher. Plus the overall picture; we’re at the bottom of a three-day trading range after a very strong bull trend, so all of that increased the chances that 7 was going to be the start of a move up.

But not always, sometimes you get these outside bars, we had one last week [that] didn’t get very far: bar 26 here.  There was another day last week.  I don’t know if I can find it — because usually when they fail, they just kind of disappear. Bar 8, Ok second failed breakup from below the day before, outside up, immediately reversed down.  So, nothing is a hundred percent, and that’s a good example of how it can look good and the context can be good, and then it fails; it just reverses.

So it wasn’t a failed breakup below yesterday’s low, it was a failed breakup below the 60-minute moving average. Very strong bull trend. We go outside up, a double bottom, possibly a wedge — one, two, three — a wedge opening reversal, 60-minute moving average, but you need follow-through, and that’s your follow-through.  That’s bad.