On your road to profitability, you sometimes had doubts that you can get there. Can you explain what got you through those tough times and, being that it’s such a personal journey at the same time, how did you communicate these issues to inquiring minds?

Markets are fairer these days

I think what he’s saying is “Did my wife get mad?” For me, in my mind, I believed in the markets. I believe that the markets are fair and balanced. They are much more fair today than when I started 28 years ago, but even then they were still pretty fair. There were certain built-in problems for traders. At the time when I started trading, you had to call in orders and so the guys on the floor had a big advantage. They’re right there on the floor and they could trade instantly, and if you call in and you have to do something really fast and you hear it ring once, you hear it ring twice, you hear it ring three times, and the market’s going against you — let’s say you’re trying to get out — it’s really upsetting and it’s really a big disadvantage compared to the guys on the floor. But that’s gone.

Most of the guys on the floor now are just like you and me — they’re trading at home or in an office somewhere. So that advantage for them is gone. Institutions still have something of an advantage. They’re operating with deep pockets and lots of computer algorithms, and they can grind out consistent profits. But my thought was: I don’t have to be smarter than the other traders, although I’m pretty arrogant — I think I am — but I don’t think that’s the key to successful trading. I think the key to successful trading — Babe Ruth is a famous home run hitter, right, but you cannot win unless you got guys with really high batting averages. You need the guys who are going to hit a lot of singles. And for me, the key to successful trading is not trying to be great. And I’ve always thought that, that it’s nice to be great, you hear about great traders, but I don’t think that’s the goal. Also, I don’t think you need to be great. All you have to be is consistently good.

Starting out—making too many bad trades

All of us make enough money to make a very good living as traders. The problem when people start out is they make enough bad trades to more than offset the good trades, so I think one of the keys to success is learning how to get rid of the bad trades and try to become more selective, and then trying to manage trades better.

At the time when I was starting out, I lost for, like, 10 years. I don’t remember; it was about 10 years. I had three kids. I had one daughter, and then 15 months later I had identical twins, so we had three kids under the age of 15 months, and I have to say that raising kids was by far the biggest focus of my life and trading was secondary. And I didn’t mind losing. I felt like I could not devote my attention to it as well as I wanted. I was an eye surgeon for 10 years; I owned a surgical center, and I had a pretty good nest egg saved up so we were living off that, and plus my losing — it was not enough to eat up too much of my nest egg. So I got by; and as the kids started getting older and needing me less, I was able to concentrate more on what I was doing. And I was just confident that — it’s like poker — all you have to do is be a little bit better than average. There’s a vig, the house takes a cut, right? And trading, the house takes a cut. You buy at the Ask, you sell at the Bid, and there are commissions. You have to be better than the average person plus — pick a number, 5 percent, something like that. And that, to me, didn’t sound like too hard a goal — to be better than average plus 5 percent. So I had to be in the top 45 percent of people.

And yes, this is not like a pick-up softball game where you have to be better than 45 percent of the people, where you just have random people from your office and most of them really don’t care. Here, everyone trading, or at least the real money is being traded by people who really do care, and they’re not just recreational people — they’re serious players and they’re really good. But I felt that “Why not me?” If I work hard and just try to be consistently good, and try to get rid of the problems that are created by my personality flaws, I thought that I could do it. And I just trusted in that and I just kept working at it, and then eventually I was able to achieve what I wanted to achieve. It’s also the same with companies. There are a lot of corporations — if you open a restaurant — everyone knows most restaurants fail, but everyone also knows that if you really think about it, you could open a restaurant and be quite successful, or any kind of a business — a printing shop, a coffee shop. If you really put your mind to it, yes, there’s always a lot of competition, but if you really think through what you have to do, it’s not all that difficult to beat the competition. 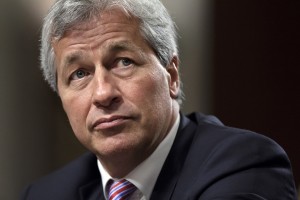 So to me, this is a business, like every other business. Yes, there are guys working for Goldman Sachs and Morgan Stanley and all the banks, but a lot of them are good, but — a lot of them are just going through the motions. That’s my belief. It’s like corporations. A lot of the CEOs — you always hear about these great CEOs, Jamie Dimon, and you just hear about how smart they are and how good they are, how effective they are, but that is not most CEOs. A whole bunch of CEOs got the job because daddy started the company or because granddaddy started the company. Look at the car companies — Ford still run — I think it’s still run by a Ford family member. And you have to think “Is hiring a family member getting the absolute best and brightest to run the company?” and the answer is no, and that allows a company like Tesla to come in and just kill Ford. Trading’s the same way. There’re a whole bunch of traders out there, even institutional traders, who are probably good but not great, and they really don’t care if they’re not great. All they know is they’re getting paid a half million dollars a year continuing to do what they’re doing, and there’s really no incentive for them to get to the next level. The amount of work required to get to the next level is not worth it to them financially when they’re already getting a half a million dollars a year.

So, it’s nice to be super smart, but it’s more important I think, as a trader, to have the personality skills, to develop the personality skills, the ability to not take trades that don’t suit your personality that you know that you don’t manage well. Just try to stick to things that work fairly well to you and get rid of everything else. I play a lot of tennis and I like to spend a lot of time at the net. I play doubles all the time, and I’m very aggressive at the net and I’m very good at the net, and that’s where I spend my time. I’m not good playing deep at the baseline. I’m not good hitting backhands, so I was trying to find a partner who’s good at those things so I don’t have to worry about them, and I just do what I like to do. I just stay at the net, and I’m very good — I’ve got very quick hands, and that’s all I do. So in trading, it’s similar. If you have a certain style of trading that suits your personality, don’t worry about doing all kinds of other things that you don’t do well, or that stress you out, or that upset you. Just find the things that work for your personality and work on getting consistently better at them.

Trading is not gambling!

I’m sorry for the long answer, but that’s how I look at it. Also with trading, I still get people teasing me about gambling. “Al, you’re just gambling.” And I tell them, “Is it really more like gambling or is it more like buying an apartment building, or buying a UPS store, or buying any other kind of business?” I think it’s more like buying a business or buying rental property. The only thing that’s different is the timeframe. So, if you buy rental property, you’re hoping to make money from the property over the next several years, and if I’m buying an Emini contract, I’m hoping to make money over the next several minutes. The risk is the same. I think what’s different is the timeframe. We’re just operating in a world where we hold things for a much shorter timeframe than if you buy a McDonald’s franchise or if you buy an apartment building.

So no, I did not get bothered by family members — my wife, my kids, “Al, why are you doing this stupid thing? Why don’t you go back to practicing medicine?” But I think, in large part, that was because we were all so consumed with being a family, and I came in with a pretty good nest egg that allowed me to do it.