Question: I’m a senior looking to supplement my pension by trading. I’m not just looking to make a fortune, just a steady, consistent income. Do you think it’s better for me to scalp, or swing trade, or should I do some of both?
Video duration: 3min 24sec

Supplement income with scalps and swings

Most traders do some of both.  I think you should not plan to supplement your income with scalping unless you’re just willing to take one or two trades a day, like buy the 8 close, buy the 9 close — high-probability trades.  But those are a high probability that you’re going to get a measured move up, so it does not make sense to buy the 9 close for a one-point scalp.  The odds are 60 or 70 percent that the market is going to go up here [measured move top] before it goes down here [measured move bottom], right? So to me, if I’m waiting for one or two trades a day like this, maybe there are probably at least three of these a week — you buy the 9 close, you sit around, buy the 9 close, put a stop below 8, and you put a limit order, measured move up right here and you can see that a lot of traders took profits exactly right there.  That’s what caused that.

So to me, if I were in your situation, I would look for a swing trade like that several a week. There are several a day that are reasonably good and just try to get one four-point trade a day.  Buy the close in here [above 45] if you want, or buy 30, buy above 36 and just use a wide stop down here [below 13] or down here [below 18], and the probability is high that you’ll do well.

And if you’re talking about scalps, I definitely would not scalp for one point.  If you’re scalping, I would scalp for at least two points and not try to take too many trades, and I would not take any of the limit order countertrend trades that I’m talking about.  I would only take trades in the direction of the trend and use the appropriate stop.  That way you have the highest probability of making money. 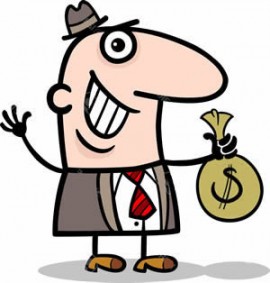 But one-point scalps, it’s really hard to make a living trading one-point scalps.  You got to be right 80 percent of the time, 90 percent of the time, and most people cannot do that, and the ones who do have traded for a long time, and most of the ones who do swing trade some of the time.  Almost all swing traders scalp some of the time.  So sometimes, you’ll look at it and you’ll see a little guy in front of you with a little bag of gold handing it to take, and you say, “No, I only want big bags of gold.”  But sometimes, those little bags of gold are just — they’re really high probability, so sometimes scalping — even if you’re a swing trader — is okay.  Like, buying the 5 low, right?  You can be a swing trader, but you can scalp that.  Buying the 11 low, high probability of buyers below.  You can scalp or swing trade it.

But my strong advice is not to plan on supplementing your income with one-point scalps because it just takes too long to get to be a really good one-point scalper. And if you’re a senior — I’m a senior, but it took me a long time to get to the point where I can scalp one point consistently well.  I think it’s far better to just look for — if you are scalping — two-point scalps in the direction of the trend, or swing trades, look for a four-point swing at a minimum after a strong breakout like 8 close or 9 close.  You just place your stop down here [below 8], you place the limit order up here [measured move top], and then go to Walmart and come back in a couple hours.

Okay, hope everybody has a good weekend.