Yeah, I think what you’re doing is, you’re using skunk stops. Stops that stink or dead skunk stops, right? This comes up all the time. So I think selling the 14 close, you’re taking a chance that you’re going to get the breakout below the moving average and that you get follow through selling below 1. I think that is okay. I think most traders who did that would exit above 13. So I think selling the 14 close, getting out above 13 is reasonable. Other traders will say, “Nah, it’s a trap; it’s a trading range. It will go above 13 and stay below the 5 high,” and 5 high is not much above the 13 high, so if you’re going to sell 14 close, put your stop above 5. And I don’t have a problem with that either. You know, you just never know in hindsight. 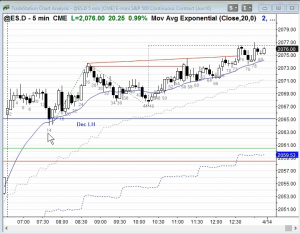 As far as buying the 26 close, I talk about that at the time.  I said, “If you’re buying up here, you really need a wide stop because this has the potential to be followed by a deep pullback and a trading range.”  So if you’re buying above 26, either you get out below 27 or on the 29 close, the early exits. Or you have to use a really wide stop, like below 14. And that 24 was a magnet at the bottom of the most recent buy climax — 24, 25, 26 — and if we start going down, it’s probably going to go below the 24 close.  So that’s the one place where you do not want to put your stop.  Either you get out before then or you use a stop at the bottom of the bull leg, 14.

Focusing on risk only

So that’s my thought there.  I understand when traders start out they only think one thing:  Risk.  “I don’t want to lose — I cannot lose much money,” and therefore, beginners tend to use tight stops.  But they also are kind of torn.  “Okay, Al keeps saying swing.  I got to use a swing stop, but I want to use the smallest possible swing stop so that I’m not risking too much.” And the result is they end up using a skunk-type stop.  An in-between stop.  They don’t want to take the early exit, below 27.  They want to give their trade time, but they don’t want to really risk all the way down here [below 14] because it’s just too much. And they end up getting out somewhere in the middle, which is around a 50 percent pullback. And that’s where strong bulls are starting to buy.  And I said at the time, “Strong bulls will buy the 24 low and bears will take profits at the 24 low, so we’ll probably get at least a little bit of a bounce.”

Out early or wide stop

Another day, another skunk stop 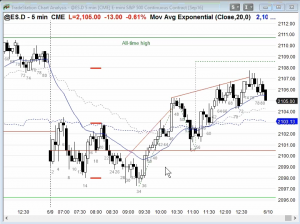 So when I say a “skunk exit,” I’m talking about one in the middle of two good choices, and usually you get killed if you’re in the middle.  So to me, the choices are — you can see what happened:  46 close; bulls did not like 47, they hated 48, and then look what happened 49, right?  It went back above the 46 close and came back down.  So that tells you that a lot of the Buy the Close bulls’ 46 were disappointed 48 and they got out on 49. And more and more bulls started to get out here.  So to me, I’m either getting out below 48 or I’m getting out below 50 or 49, or I’m going to use a really wide stop down here [below 33].

And what bulls do is they either get out here [B48] or they get out down here [below 33], and as it’s selling off they can be buying one, two, three points down.  A lot of bulls don’t do that.  Instead, they wait for a bull bar — 54 — and then they buy above the bull bar. And then they try to get out breakeven around their original entry.  That’s what caused this big tail here [B60].  Or they just hold part or all to see if we get a swing up.

Understand what is going on

So back to your question, you buy that close [46] stop down here [below 45].  That’s the one place I would not put my stop.  I would either get out below 48 or below 49, below 50. Or I would just use a wide stop down here [below 33] and wait for a bull bar and buy more above the bull bar.  Hard to do, especially when you see a collapse like 53. But if you understand what’s going on, then it’s simply a test of the open in a trading range day, it’s easier to rely on the wide stop, okay?