Do you have any advice for staying upbeat throughout the years while losing money? I’ve been losing money for nine straight years and it gets hard to maintain a positive attitude.
Video duration: 3min 47sec

Losing money — for a long time! 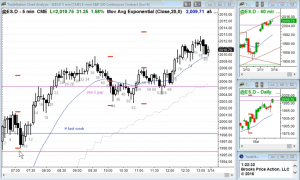 Yeah. My only thought — I lost money probably for 10 years or more, and I’m a really stubborn guy. And my thought was “I can see the chart at the end of the day.  I print it out, and I can see it’s going up.  I knew bar 13, 14, 15, it will go up at least a little bit higher. So why not just buy there and put a stop here [below 8] and make money?” So initially, I started doing that for swing trades, and then I started saying, “Al, I can see all kinds of little things all along the way and they’re probably 30, 40, 50, 60 one-point trades during the day, and y’know I can swing and just wait or I can keep grabbing as many of those little one-point things as I can,” which is what I ended up doing.

So, if you’re losing money consistently, it’s almost certainly due to management and trade selection.  You’re probably buying too high, and then not using the correct stop Or you’re selling too low and not using the correct stop.  And I think that’s really, really important.  When traders are losing money, all they think about is loss, and — in general – they end up buying too high and using too tight a stop, selling too low and using too tight a stop.  Any time you’re buying at the top of something, you need a wide stop; anytime you sell too low, you need a wide stop; and you have to be trading small enough so that you can handle it.

So let’s say you buy above 35, right? Where’s your stop?  Maybe a couple ticks below here.  The actual correct stop is below 18.  So if you’re buying up here [above 35] you put a stop down here [below 18] and I would scale in. This is too tight — we’re probably going to get the second leg down, so here and I would buy above a bull bar there [above 52].  And then once we get this [the bull leg up], you raise your stop to that [below 52].

So I think — I would, first of all, try to reduce the position size really, really tiny, and then I would just look at where the correct stop is, and I would look at being able to scale in one time.  So no matter where I buy up here [26-36], I put my stop down here [below 18] and I want to scale in one time and do it above a bull bar. I don’t want to do it above a bear micro channel with a bull bar with a tail on top [45], but here — second entry — that’s where I buy again [above 52].  If you just print out charts, it’s such a good way to do it that it makes sense.  It’s a really good thing to do.  Even on crazy days like this, it still works.

But that would be my thought.  I would think about trading really, really tiny and trying to keep it really, really simple.  You know, Al says, “Always in long”?  Okay, I’m going to buy a really tiny amount.  Al says the stop is down there.  I’m going to put the stop down there, and I’m not going to add on if it goes against me unless I get a bull bar and then I’ll buy above the bull bar, above 52.  And then I decide whether to get out breakeven on the entire trade or try to get out breakeven on my first entry and then with a profit on my lower entry.  And if you just do that, it’s a really, really high probability way of trading.  And, to me, that would be my thought about the first direction I would take.