Al, can you clarify how you use the term “swing” in the trading room?
In your books, I believe that you use the term when discussing trade probability, position size, and profit objective.
How should we view your use of the term in the room? 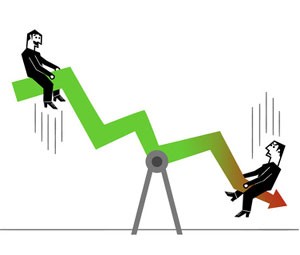 Obviously not! That would be a scalp!

So, for me, a swing trade is a trade where I get in with the intention of either getting some minimum profit. In the Emini, the usual minimum objective for me is four points for a swing trade. So I want at least four points, and I expect at least two legs, which means that I’m willing to sit through at least one pullback. So a swing trader buying above 26, they see this, that’s good; they assume they’ll be a second leg up after a pullback. Pull back 29, then a second push up here. So if a person got out below 32, they would be meeting one of the minimum objectives — two legs up. They would be meeting another objective — four points.   They would be meeting another objective — two times actual risk. Actual risk is three ticks, and we went up far more than six ticks.

So, obviously, most swing traders would get out above 65, but they would have more than four points; they would be testing the low of the day. There are a lot of reasons to get out, but, somewhere in here, you have to be expecting a second leg down. 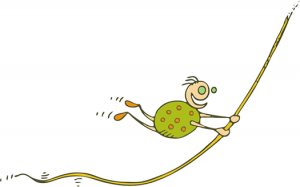 So, when I think about a swing trade, I’m thinking of two legs, which means I sit through a pull back on route to at least a four-point profit. Or, you take it as an Always In swing trade, you just keep holding it.

So let’s say you’re buying, you just stay long until it’s Always In Short. Did it become Always In Short here, or here? No, but it probably became Always In Short 55 or 54 — 53, 54, 55. That’s when I mentioned it in the room that I thought it was Always In Short there. So a swing bull would then get out over here if you did not get out for any other reason. And a swing bear would go short there, and he would get out above 65, even though it’s not really clearly two legs down.

So, I know it’s kind of vague. To me, a scalp, in general I don’t want to allow a pullback or only allow a very brief pullback. So that’s another distinguishing feature between a swing trade and a scalp. Scalpers want a quick profit with no pullbacks. Sometimes, they’ll allow a small pullback. Swing traders will allow one pullback, but not two. Let me give you an example. The bulls want the market to stay above the 22 high. We got one pullback 34. Once it turned up from there, the bulls would get out below 34, so they would not allow it to come back down there a second time.