Question 1: I shorted above 66, okay, thinking that there might be a pullback for a scalp. Instead, I exited for a loss even after scaling in. Can you comment on this trade?
Video duration: 5min 00sec 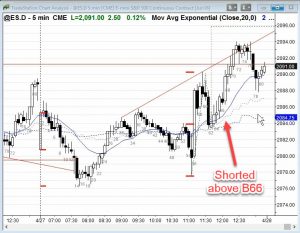 To me, I thought the odds were we might get a double bottom.  To me, I personally would not have taken that short, because we got a bull breakout on 65 so we have a bear flag here and we’re getting a bull breakout of a bear flag. So it makes me wonder if we’re going higher.  So had I sold above 66, I’m going to buy back 67, close 68, close — maybe even go long.  You can see that if you held for the rest of the day and sold more below a bear bar, you would have gotten out maybe around breakeven.  So in terms of management, that would be my issue.  So for me, if I’m selling the 66 close thinking trading range — instead we get a bull breakout of a bear flag, with follow-through 69 — I automatically get out and if I’m flat, I pretty much automatically get long.

So this is the thing:  It happened so fast.  They sell the 66 close and they say, “Wait a minute, 67, it should have turned down.  Instead, it’s a big bull bar closing on its high.  I got to calm myself down here.  Maybe I’ll wait a bar or two,” and then all of a sudden it just keeps going up and up and up.  That’s why I have all of these mechanical defaults that I do, and sometimes mess me up — getting out of things too early — but it’s less stressful.  So if I make a bad trade — let’s say I sell 66 high and you get that big bull breakout at 67, my trade becomes bad, right?  Whether or not it was a good idea doesn’t matter.  It’s now bad.  We’re getting a bull breakout of a bear flag.  I’m just got to get out.  I’m not going to worry about scaling in, saying maybe I can minimize my loss.  The market’s going higher, so I got to get out.

Question 2: Sold the 14 high, moving average test, scaled in higher, stopped out above 2 — okay, that’s way over here — exited 43. I sold the 14 high on the moving average test, so you sold this high, okay? Scaled in higher, stop above 2 – okay — exited bar 43 and did not want to hold into the FOMC report, and thought this was the best I could get. Could have broken even on 47 had I waited. Did I handle it right, not to be selling the 14 high? 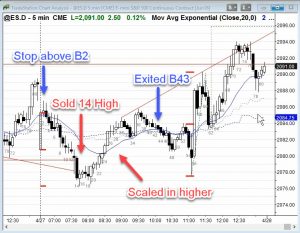 My only thought is I thought, coming in, that the selloff was not all that strong.  I thought the day would be pretty much a neutral day going into the report, and then we had a micro-double bottom, 15 and 19 closing on its high.  I thought probably a minor reversal, but when I start to see bars closing on their highs like that, I’m starting to suspect that we may go higher.

I knew that we were going to get to the 14 high, right?  But that does not mean that we stop at the 14 high.  Usually when it gets there, you get two things that happen:  One is the rally is weak and you test back down.  This is not weak; we have all these bars closing on their highs.  The other is you get a measured move up, okay, based on the height of the bar.  So it takes us up there [B7].  So once we start going three, four ticks above the 14 high, I think we’re probably going to go up for a measured move.  So for me, I would not do it.  Also, if we have a reversal and we have three bull bars closing in on the highs and we have another couple of bull bars closing on their highs, I will sell at the moving average to take profits on the longs.  I will not sell at the moving average to get into a short.  I don’t like to see consecutive bull bars, especially three out of four closing on their highs like that.  I’d need the market to go a little bit sideways before I did it.  And as far as keeping your stop above 2, I thought that was probably okay. When you see this [bull BO to B25], you know you can get a second leg up, so pullback second leg up — and a bear bar here [B37]. Theoretically you get scale-in bears who will sell below the bear bar trying to get back down to the 14 close.

Scaling in with wide stop

That’s a lot to process, but in general it’s okay to use the wide stops above 2. But if you do I think it’s better if you look to sell again below a bear bar, either here [B31] or here [B37], and then simply try to get out breakeven on the entire trade and give up on the idea of a profit.  For me, I usually get out on the breakout and the follow-through.  So if I’m shorting and the market breaks out against me, and has follow-through, I think there’s too much risk of a measuring gap.  So I usually just get out, and if anything I look to quickly take a trade in the opposite direction.

But selling the 14 high, my concern was too many bull bars. Plus the micro-double bottom, and you have the expanding triangle. And we had, basically, two large legs down and then two small legs down here, so I thought the best the bears probably were going to get here was a trading range.  So you can argue you’re selling at the moving average in a trading range — yes, that’s true — but too many bars up — there’s just too many bars up in here for me to take a first entry short or a limit order short.

Okay?  I hope everybody has a good night.