Question: Which book do you recommend for learning to identity trade probabilities and trade management?
Audio duration: 7min 55sec

I don’t read books; I write books.  I know that sounds narcissistic and I probably am a narcissist, but I don’t have an answer as far as books to recommend.  I tried in my three books, the ones that I wrote a few years ago.  I try to be comprehensive, discussing probabilities and trade management.  Every day, I talk in the room.  Traders ask me questions and I come up with better and better ways of wording things, ways of saying things that I hope are easier for people listening to me to understand.  And every day, I get questions here and on the Brooks Trading Course website. And again that gives me a chance to think more about things in the course and in the books, and to try to come up with clear ways to say them.

I’m pretty confident in my knowledge of the markets and I don’t trust a lot of other people out there.  25 years ago, I paid for tutors; I went to seminars; I bought all kinds of books; I bought all kinds of software; and I concluded that, most of the people who are talking are frauds. What they say, if you think about it, it sounds good when you first hear it, and a lot of it is cliché, but it really does not make sense. And that’s my concern about a lot of the people who write.  I just don’t trust them.  I’m being honest; I just don’t trust them.  You can read MBA-type books, grad school type books on management, but it won’t be technical.  Some of it might be technical, but most of it will be fundamental stuff.

Business schools not useful for traders

I have a daughter at Harvard Business School.  I’ve been to Harvard Business School with her.  She invited me and I spent a day there, and I think most people who are day trading will not find anything useful at business school.  I think it’s not geared to that.  It’s geared toward institutional investing, portfolio fund management — it’s not all fundamental — but it’s mostly all fundamental.  And then the math for portfolio management is, I think, very complicated, and I think the average trader — the average profitable, successful, consistently profitable trader does not use any of it in his trading.  He simply tries to do what’s right every day, and tries to look for ways to structure a trade.

At any given moment, you can buy or sell 90 percent of the time.  On a day like today until the final hour, you can buy or sell and scale in lower if you buy, scale in higher if you sell, and as long as you logically approach what you’re doing, I think you can make money pretty much every day, right?  And I do not think that you need much on probability or management beyond the stuff that I write about.

In terms of probability, I use the example of the market cycle all the time.  I try to keep it simple:  If the market is in a breakout phase, there’s a 60 percent chance it will go to some kind of measured move based upon the breakout.  And if it’s not in a strong breakout, then in general, you can buy or sell.  If it’s a fairly tight channel — let’s say a fairly tight channel up, the math is better just to take buys.  If the channel is broad enough you can trade in both ways.  And whenever you’re in a channel or a trading range, if you’re structuring your trades right and taking second entries, it’s pretty easy to find setups where the probability is 60 percent. And if you’re taking strong breakouts, the probability is 60 percent.

Most of the time when it’s 40 percent certain, I’m willing to scale in and that gives me increased probability, but I pay for it with increased risk. Increased risk because my stop is further away, increased risk because my position is larger. But that is basically how I trade.  I think most profitable traders have some variation of that and they don’t spend a lot of time trying to perfect their ability to determine probabilities. Probabilities, they’re so fleeting.  For one instant the probability is very high, the next instant it’s very low.

I give the example of all of us being 90 percent certain many times a day. Let’s say you buy somewhere and you have a limit order two points above. At one point it hits your limit order and does not fill you. And at that instant you’re trying to get a one-tick profit from the current price. And your stop might be seven or eight ticks away, and you continue to hold. So why are you holding trying to get one tick while risking eight ticks?  Why don’t you just simply exit at the market?  And you can only continue to hold if you feel you’re 90 percent certain that you are going to get that final one tick. Otherwise it’s insanity to hold for a one-tick profit while risking eight ticks.

So, all day long when you’re taking trades, that you are 90 percent certain briefly many times a day.  Many times a day you are 90 percent certain; you don’t want to think about it because you don’t want to be thinking, “Gosh, I’m risking eight ticks to make one tick,” and that’s a fool’s way to trade.  But that is truth.  All good traders who take profits with limit orders are in that situation pretty much in every trade. 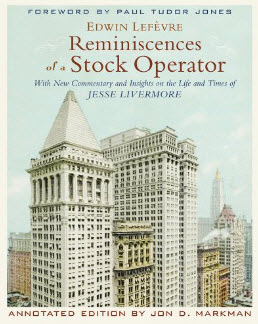 In his recent 52 Traders podcast Al did suggest an excellent general trading book which is highly recommended: Reminiscences of a Stock Operator: With New Commentary and Insights on the Life and Times of Jesse Livermore by Edwin Lefevre and Jon Markman. This book is certainly one of the few ‘must read’ trading books out there. 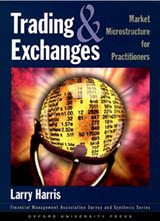 I would add Trading & Exchanges: Market Microstructure for Practitioners by Larry Harris. This book gives you valuable facts on how the market works – most of which is unknown to many traders. And copious details on the different kinds of traders present in the market, and how they actually trade.

So just 5 books recommended in my humble opinion: Al’s Price Action Trilogy (Trinity?), and these two books. Feel free to comment below on others.