Al was asked for any news on the Trading Course update. Listen to and/or read Al’s response, and watch two sample videos showing the deep level of work and detail that Al is going to. The video samples have no audio, but contain all content and animations stepping through at a readable pace.
Scroll down below videos for audio playback and transcript.

Video 19B Support and Resistance
No audio narration (7min)

Expand video to full screen for best results. Video 19B is the second of two videos on topic. Sample uses 23 slides from a total of 43. Members’ feedback is welcome below.

Expand video to full screen for best results. Video 41A is one of three videos on topic.
Sample uses 16 slides from a total of 42. Members’ feedback is welcome below.

I think until you see it, you really won’t understand just how involved it is. Had I realized in advance that it was going to be as big a project as it is, I would not have done it. But, when I started doing it, I decided that I really wanted to do it well. I probably will never make a significant revision to it again. I think it will have everything that I want to communicate there, and I think it will be much clearer than anything else I’ve ever done.

Richard is going to make a couple of videos of PowerPoints of some of the modules that I’ve done. The current course is about 36 hours long. The new course might be closer to 50. I’ve cut several of the longer videos into pieces, and some of them I’ve cut into three pieces. So for example, ‘Trading breakouts’, I’ll have three videos each, maybe 30 minutes or so.

Everything a trader needs to know 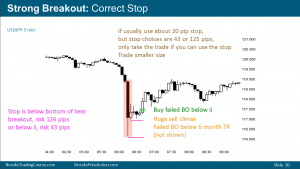 I have no idea what the total length of the course will be. I think it probably will be about 50 hours. You can imagine, it’s thousands of slides, and tens of thousands of little notes on the slides. But it will be really comprehensive and it will have pretty much everything that any trader needs to know. Obviously, it will take a long time for anyone to go through it all, and someone will have to go through it many times to really understand everything. I think a trader does not need to understand everything to trade profitably, but I going to have an incredible amount of information there. And I’m hoping that it will be much easier to read or to watch.

A hard slog but worthwhile

I have to be honest, at this point it’s really becoming a lot of hard work because I like doing interesting things, and when I started the project, it was new and interesting, and now it’s just becoming work. Pretty much all my free time is going into it, and there’s no way that I can get paid enough to make it worth my while But I’m getting late in my trading career, and I really want to do something special. It’s not like there are a whole bunch of things I like doing. What I like to do is think; I like to sit and think and try to get my ideas clear, and then try to present my ideas, either in books or in the trading room, like right now, or in the trading course.

I do enjoy that, so I’m trying really hard to make it clear. Every day here, I take several questions; on the two websites, I take questions; and then I also [have] people talk with me on the side. And the result is, since I’ve released the last version of the course, I’ve answered thousands of questions, and I’m getting a good sense of what I did not make clear in the current course. With that information, I’m making a special effort to try to make everything that I did not make clear; I’m trying to make it very clear. 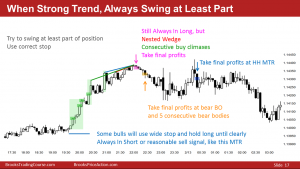 Anyway, Richard is going to take a couple of the videos and turn a couple of the PowerPoints and have them stair-step through the animations, and he’ll turn them into videos. The course is about 50 videos, but some of the videos I have divided into two or three. So, in actual fact, the numbers will be one through 50, but 41, we’ll have 41A, and there’ll be another video, 41B, another video, 41C. Instead of 50 videos, there might be 75 or 80 videos. And then I’m also doing a Forex version of the course at the same time, so one course is going to be pretty much all Emini, but the Emini course, traders can trade stocks, or crude oil, or gold, or bonds; they could easily use just the Emini course.

They can also just as easily use the Forex course. The Forex course is entirely Forex charts and all Forex information. The Options part of the course, I’ve expanded into three videos, and I’m hoping that it will be helpful. And the Forex course is comprehensive on everything, from if you’ve never seen a Forex chart, if you’ve never seen any chart — I have stuff right for a person who is just starting out. Plus I have pretty complicated stuff — the kind of stuff that I talk about sometimes in the room: about testing the high close, testing the low close, scaling in; can the scale in traders get out without losing money, and if they cannot, that’s a sign the market wants to go the other way, strength of breakouts.

I’m hoping that Richard is able to put a couple of the videos on the Brooks Trading Course website. They will not have audio; they’ll be just automated, have PowerPoint just run through itself, stair-stepping through the slides and the animations. He’ll just record it with Camtasia or something and then post it up there with no audio so the traders can see what’s going on.

I probably will end up charging a lot more for the course. In part because I feel like I’ve worked so hard on it. And even if I end up making less money from it, it’s just more of a sense of I’m working so hard on the thing, that selling it for $249 [original early-bird price] just doesn’t seem appropriate. So I’d rather charge more even if it means making less just to get some sense that I’m being paid appropriately or appropriate level for all that I’m doing with the course.

How much for ‘everything needed’?

What will the price be? I don’t know. I rely on other people to give me advice on that, but probably, when we start doing the audio, we’ll probably start to increase the price of the course. I doubt that we’ll sell it for less than $349 initially, and we may end up increasing the price as time goes on. We’ll see.