How much trading leverage do you use? For example, say the minimum initial margin on the Emini is $2,500 per contract, how much capital would you actually commit to trading this one contract?
Video duration: 5min 5sec

That question comes up every now and then, and I’m going to answer it in a way that’s not satisfying, okay?  If you’ve been trading for a long time and you have some money, you can have a whole bunch of accounts. And I have a whole bunch of accounts, and some days I trade four or five different accounts. Some days I trade, you know, one or two accounts.  And let’s say on a day I trade one or two accounts, how much am I margining on that one account?  I don’t know.  Sometimes, I’m margining as much as 50 percent.  But is that saying that I’m using 50 percent of my trading capital as margin?  No, because I have six or seven other accounts, and so the percentage, is much less. So it depends by what you mean by “how much are you using — how much of your account are you using for margin?”  It’s not how much of my account am I using, it’s how much of my total trading capital am I using.

And on any one trade, in general, I don’t know — I don’t even pay attention to it.  I certainly don’t want to be too high.  And any one account, it would be unusual for me to be using more than 50 percent of the account for margin.  And all told, I probably don’t want to be using more than 10 percent of the entire collection of accounts.  I don’t know, I would have to sit down and think about it.  I probably go more than that sometimes.  That’s for futures trading.  Obviously, if I’m trading in a stock account, I’m perfectly happy using 100 percent.  If I’m trading options, let’s say I’m buying options, either puts or calls or spreads, and that, I usually keep the positions small. So on any one trade, I might risk no more than 3 percent of my trading capital.  Even then, I probably don’t trade even 3 percent.

So how much margin to use?

But going back to your question, I think what you’re indirectly asking is how much should a trader who’s starting out use? If he has, let’s say, a $10,000 account; should he trade one contract or two contracts?  I think anyone with less than a $25,000 account should be thinking himself as a one-contract trader, but allow for the possibility that he sometimes can add on.  You can say, “Well Al, that’s not margining very much.”  It’s not.  I understand that, but I’ve been doing this for a long time and I know the mathematics on it. And I know that even if you win nine trades in a row, 15 trades in a row, eventually you’re going to have a run where you lose six, or seven, or eight times in a row.  And if you’re margining 25 percent of your account and you lose six in a row, you blew up your account.  So I think it’s always better to trade as small as possible, and then rare occasions if something looks really good, you can increase.  But in general, I think it’s much better to trade small as possible.

Trade the “I don’t care” size 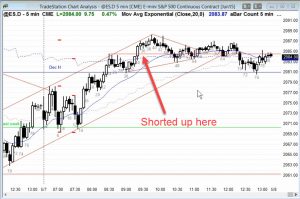 Also, I sometimes talk about the “I don’t care” size of trading, and I come back to that repeatedly because I think it’s so important to being successful. You really cannot care.  When I put a position on, I don’t care.  I don’t care, right?  And that’s the way it has to be.  If you want to be objective and you want to be able to do what’s right, so when I shorted up here [B35], I didn’t care if I lost, right?  I knew the odds were really high that I was going to win.  But to be able to take that trade, when the market looks like this, and you’re shorting, right, you have to have confidence in the math.  And I did.  And with that, I just felt the odds were really good that if I sold and I sold higher, I was going to make money.  And if lost money, I wouldn’t care because when I say the odds are that I’m going to make money, that does not mean I’m guaranteed to make money.  What that means is sometimes I’m going to lose. 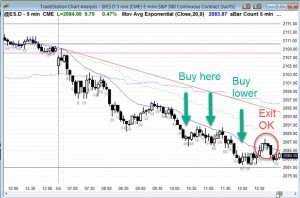 However, if I’m able to use a wide enough stop and manage the trade correctly, those times are going to be really, really rare.  Even when the market does crazy things, if it’s stair-stepping down. Even in a market like this where we get big, big moves down — you know, and let’s say you’re buying this low [B46/56], if you have the ability to buy lower [B66] — the next reversal up — and you can manage your trade correctly, you’re still going to make money.  You’re still going back to that low.  And that’s true on all these crazy, big days.  Even a day like this. So even if you made the mistake of buying this low and did not get out, right, if you manage your trade correctly, buy more here. Part of the reason why we have these tails here is you have the 50 percent pullback traders, the traders who bought, scaled in, and the “thank you God” traders — “Oh gosh, you let me get back at breakeven on my trade.”  But the odds are high that if you pick your trades correctly — even if you’re buying a falling market, as long as there’s enough two-sided trading going on, the odds are high that if you manage it correctly, you’ll be okay.